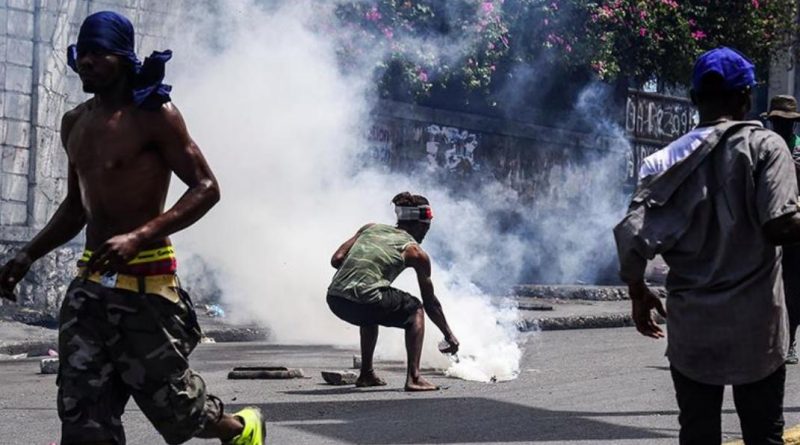 Revolutionaries destroyed police headquarters, attacked residences of government officials, and burned a jail and courts to the ground in different parts of Haiti on Friday.

Insurgents are fighting to overthrow the corrupt right-wing regime of Jovenel Moise, who is backed by the US. Four people died in clashes in recent days, with many reports of injuries.

In June, judges of Haiti’s High Court of Auditors said in a report that Moise was at the center of an “embezzlement scheme” that had siphoned off Venezuelan aid money intended for road repairs, laying out a litany of examples of corruption and mismanagement.

The aid money came through Venezuela’s PetroCaribe program, which had allowed Haiti to buy petroleum products at discount and on credit.

However, the program has now been suspended for more than a year because of the interests of US imperialism, which backs the Haitian regime and has supported coup attempts to install a right-wing regime in Venezuela.

The suspension has meant that Haiti’s long-suffering people have been faced with an extra burden: an ever-worsening fuel shortage that has resulted in closed service stations, rising prices and long lines to buy petrol.

Protesters successfully drove the police out of Cité Soleil, Port-au-Prince’s poorest neighborhood. Revolutionaries completely destroyed the UDMO/police headquarters. Heavily armed units of police abandoned it after hours of attacks by residents with molotov cocktails and showers of rocks.

The UDMO (Departmental Unit for the Maintenance of Order), who have murdered many Haitian people to protect the corrupt Moise regime in power, have been trained by the US state in Austin, Texas where an “Executive Leadership” training course was set up for Haitian security forces.

In Gonaives, a city in northern Haiti, government offices were burned.

In Port-Au-Prince, all government offices were closed, as protesters sang and danced in streets for the fall of the US/Trump-backed government of Moise.

Revolutionaries have blocked roadways with barricades, using anything in their disposal from debris to burning tires since early on Friday.

The central court and jail have been burned to the ground in Jacmel, southern Haiti after prisoners arrested in the last round of protests were liberated.

The courthouse in the community of Petit-Goâve, southwest of Port-au-Prince, has also been set ablaze, according to people on the ground.

Two Sogebank branches in Haiti were attacked by insurgents on Friday. They are no longer simply demanding the resignation of the fraudulently installed puppet president, but the end of the looting by oligarch families, like the owners of this bank, who steal 90% of the wealth.

As Haiti comes to the brink of revolution, overthrowing the regime of Moise, insurgents are also attacking the systems of capitalism and imperialism that have enforced the poverty and despair of the Haitian people.