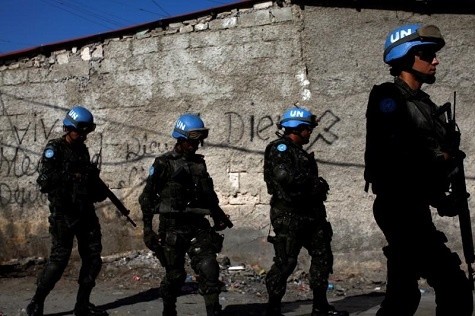 The review of the U.N.’s presence in Haiti reveals serious failures that have harmed the already impoverished country.

As Haiti enters its fifth consecutive week of unrest with daily protests demanding the resignation of President Jovenel Moise, the United Nations ended Tuesday its 15-year-long peacekeeping and justice mission in the Caribbean country with a mixed legacy.

In 2004, after then-President Jean-Bertrand Aristide was ousted and Haiti gripped by a social and political crisis as well as raging gang violence, the United Nations decided to deploy thousands of soldiers and police officers with the presumed aim of fixing up the island country.

A statement from the organization released on Tuesday cited Jean-Pierre Lacroix, U.N. under-secretary-general for peace operations, saying the U.N. mission had fostered a better environment for democratic processes to take root but more political solutions were needed.

However, at the time of the evaluation of this more than a decade presence, critics wonder the degree to which the mission achieved its objectives in a Haiti where the institutions remain extremely weak and the political unsteadiness at its highest.

The nation is still the poorest country in the Americas and endures since mid-September everyday demonstrations calling for the president’s resignation.

In one recent protest, thousands of locals marched to the U.N.office to deliver it the message to stop making things worse, supporting Moise, and interfering in the country’s affairs.

Miami Herald won’t tell you the 2004 protests in #Haiti were US-funded to push out Aristide to allow the CORE GROUP (US, Canada, France, Brazil, Spain, Germany, EU, UN & OAS) to take over.

The review of the U.N.’s presence in Haiti reveals serious failures that have harmed the already impoverished country, including the introduction of cholera and sexual abuse scandals.

The introduction of cholera for instance, longtime denied by the international organization, caused unspeakable suffering that had and still has devastating consequences on the Haitian people.

Another epidemic of the waterborne disease also broke out after peacekeepers dumped infected sewage into a river during recovery efforts after the 2010 earthquake.

The U.N. refused legal responsibility for the outbreak which claimed more than 10,000 lives. Though in 2016, outgoing U.N. Secretary-General Ban Ki-moon apologized for his organization’s role and announced a US$400 million fund to help affected people.

To date, the U.N. Haiti Cholera Response Multi-Partner Trust Fund has only raised about US$10.5 million and a quarter has already been spent, according to online U.N. figures.

The U.N. just like the other aid organizations has also faced criticism for slow reconstruction efforts due to a lack of coordination and bypassing the government and businesses.

But that’s not all, the U.N. peacekeepers have on multiple occasions been accused of rape. In 2011, then Uruguayan President Jose Mujica apologized for the rape of an 18-year-old Haitian man by Uruguayan U.N. peacekeeping troops.

Featured image: In 2004, the UN decided to deploy thousands of soldiers and police officers in Haiti with the presumed aim of fixing up the country. | Photo: Reuters