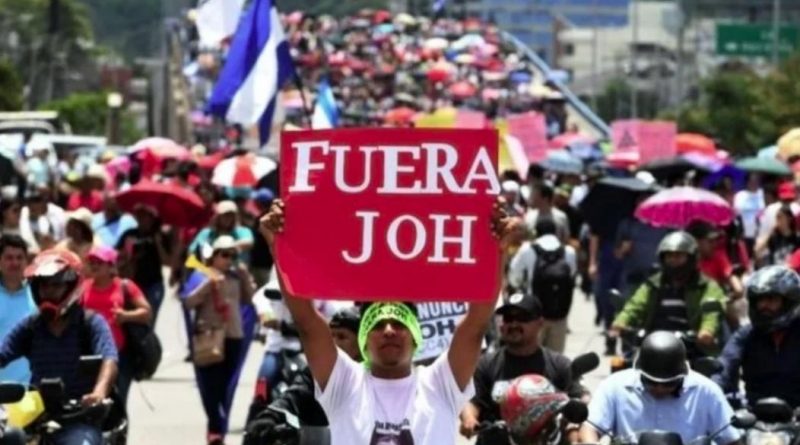 On August 3, the media network Univision published a report which implicates Honduran president Juan Orlando Hernández (JOH) in a conspiracy to use drug trafficking to “maintain and increase his political power”. The report cites a document published by a federal court in New York on August 2 related to the upcoming trial of JOH’s brother Antonio “Tony” Hernández who was arrested in Miami in November 2018 for drug trafficking and other charges.

The 44-page document summarizes some of the key evidence gathered by the prosecutors against Tony, who is accused of being “a violent drug-trafficker” who used political connections to gain personal and political benefits. The document also mentions that Tony may have planned the assassination of rival drug traffickers.

Federal prosecutor Geoffrey S. Berman alleged that Tony Hernández became involved with drug traffickers as early as 2004 and used the influence of his family in the region to ensure safe crossings for traffickers in exchange for bribes. It details his relationships with different cartels from then on and how these connections were used for his benefit and that of his family, as well as for his party’s political aspirations.

The document does not refer by name to Juan Orlando Hernández but mentions Co-conspirator 4, (CC-4) who is described as the Honduran president elected in 2013 (JOH was first elected president in 2013). The document has extensive information from Cooperating Witness-3, (CW-3), who appears to be Alexander Ardón, the former mayor of El Paraíso, Honduras, who was charged with “Crimes Relating to Large-Scale Drug Trafficking” by a New York Federal Court and was extradited to the US.

The document states that Ardón, CW-3, was instructed to pay bribes to support JOH’s election campaign and “spent approximately $1.5 million in drug proceeds to support CC-4’s presidential campaign, including by paying cash bribes to other officials and providing gifts and favors to local politicians.”

JOH and his far-right National Party completely denied the accusations. JOH claims that he is the victim of a conspiracy and has attempted to position himself as a key player in the war on drugs by showcasing the arrests, convictions, and extraditions of people involved in drug cartels and the drug trade during his years in office.

The minister of the presidency, Ebal Díaz, claimed that drug traffickers in Honduras are actually working with the radical opposition to “take out the biggest enemy to organized crime that is Juan Orlando Hernández”. Díaz also claimed that there is evidence which links opposition leader and presidential candidate Salvador Nasralla with the maras and gangs.

The revelation gave new energy and life to the movement calling for the resignation of JOH. While many in Honduras have long suspected JOH’s involvement with drug traffickers and narco-politics, especially after Tony Hernández’s arrest, the report provides the confirmation. On May 29, another document related to Tony Hernández’s trial revealed that JOH, his sister Hilda Hernández and other high-level functionaries were under investigation by the Drug Enforcement Agency (DEA) of the US as early as in 2013.

Massive demonstrations have been held across Honduras in the week since the report was released and protesters are demanding that JOH, the ‘narco-dictator’ or ‘CC-4’ resign and be tried for his involvement with criminal activities. The Libre Party called on their members and sympathizers to mobilize and the Platform for the Defense of Health and Education has also joined the call for mobilizations.

The protests have been met with a violent crackdown by Honduran security forces. On Tuesday night, riot police repressed students in San Pedro Sula at the National Autonomous University and threw tear gas at them for over an hour. Radio Progreso reported that at 9 pm, the police threw two tear gas bombs at a university bus, causing several students to faint and two had to be taken to the emergency room.

On August 8, Adrienne Pine, a US journalist from Mint Press News was attacked by Honduran police forces while covering the protests and police repression of students at the National Autonomous University of Honduras in the capital Tegucigalpa.

On Wednesday, August 7, communicators from the northern city of San Pedro Sula held a rally to denounce the police repression that journalists and communicators have been facing while covering the protests.

Supporters of JOH’s far-right National Party have also been mobilizing in order to show their support for him.

Despite heavy repression, the mobilizations demanding JOH’s resignation continue. Since JOH was fraudulently ‘re-elected’ in November 2017, social unrest in Honduras has been constant. Following the electoral fraud, highways all over the country were blocked for weeks by protesters and multitudinous mobilizations were carried out in the major cities. Since then, there have been several recurring waves of mobilization sparked by different aspects of JOH’s neoliberal, repressive policies.

The latest was in May and June where hundreds of thousands mobilized across Honduras against measures that would further privatize the public health and education sectors in the country. Doctors, teachers, students, nurses, other health and education workers, as well as the general population, mobilized for weeks against the measures with the demand that the government address the glaring crisis in these sectors. The mobilizations channelized the widespread anger and misery felt by many sections of the working class in Honduras that have seen their quality of life deteriorate in the last decade.