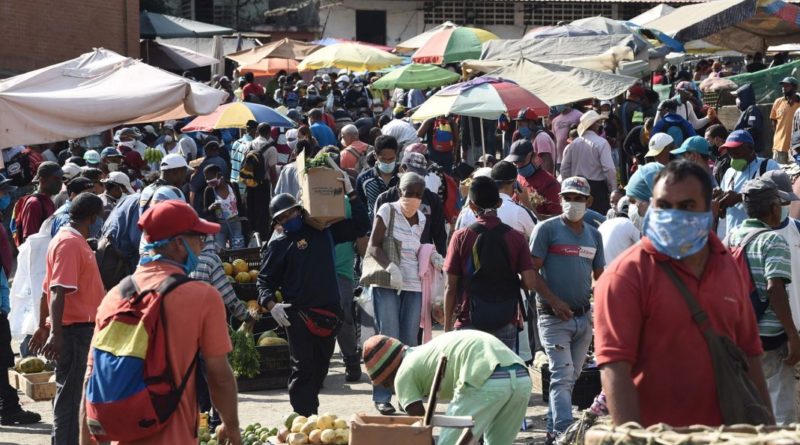 Surviving in the midst of a pandemic and its associated economic crisis is a challenge whose complexity increases every day, especially for those who do not have savings or a fixed salary.

Paradoxically, Venezuelans from various social strata, especially the poorest, face the situation with resources gained by them after long experience in economic suffering. They have a postgraduate degree in what is popularly called “aguantar la pela” [hunkering down] and this has been revealed as a whole science.

Quarantine, social distancing, and transportation problems affect almost everyone, but wreak havoc on those who make a living from trades that involve close contact with others. For example, people in the hairdressing field.

José Gutiérrez, a barber for more than 40 years and with a large clientele, expresses it in dramatic terms, although with a touch of humor. “Barbers are screwed because how do you cut someone’s hair wearing a mask, while you are wearing gloves, a meter and a half away? Only the Elastic Man can.”

He assures us that, like almost all barbers and hairdressers, he lives day to day, so that the passage of these weeks without working has been strangling him, especially due to the disproportionate increase in price of all basic necessities. For this reason, he has been tempted to resume his activity in some way, but he has abstained, not only because it is against the quarantine, but also because it is scary. “I am informed and I know that people can be infected without having symptoms, so anyone can give it to you, even if they don’t have any runny nose. Zape gato! (Shoo cat!)” he says.

Gutiérrez comments that other people in this field are attending to their clients at home. For example, a hairdresser named Maribel calls her clients to greet them and ask how they have been doing in quarantine. If the opportunity arises in the conversation, she tells them that she can make an emergency cut at home, with due sanitary precautions.

Barbers and hairdressers are, by the way, concerned that many desperate people are cutting their hair on their own or putting themselves in the hands of relatives. “We are going to have to fix many disasters when this is done,” says Gutiérrez, again with a humorous take.

Although the government adopted measures from the beginning to avoid layoffs and guarantee the payment of wages, this protection only protects workers with formal jobs. But, in these times, many labor relations are precarious.

Dora Rinaldi, for example, is a retiree who had been rounding out her income by delivering home accessories for cell phones, but for now, the company (which is not an organization, but a natural person, “an entrepreneur”) has paralyzed the sales. Fortunately, Rinaldi’s daughter has a fixed salary and has not stopped receiving it.

There are also cases such as that of the waiter Anderson Torres, who had been experiencing a period of certain prosperity because his bosses paid him the national minimum wage in bolivars and a dollar bonus that, since the quarantine began, has stopped flowing. Obviously, the company’s obligations [only] go up to a nominal salary.

The whole of society is affected by the situation, but some sectors suffer with much greater intensity. For example, all those who work in activities related to tourism and leisure. The entire coastal strip of the country has suffered, in particular due to the absolute zero of the Easter season, one of the most important of the year.

In Margarita the situation was already bad, but it got indescribably worse after the island became the country’s most severe hotspot for Covid-19. Families living off the holiday seasons (Carnival, Easter, school holidays, and Christmas) have a bleak outlook ahead because the paralysis is expected to span the rest of the year. “This also cuts off the tours of Brazilians, who have saved the year for us lately,” says a small businessman who offers lodgings, who, to make matters worse, was infected (although he is asymptomatic) in the wave generated by the baseball academy of Pedro González.

Most of those Brazilians who visited Margarita until the beginning of 2020, by the way, came from Manaus and Boa Vista, to the north, near the border, one of the areas worst hit by the pandemic in the neighboring country, so additional precautions will have to be taken regarding them when they return to the island.

Very affected are also all those who depend on parties, including musicians, djs and entertainers. Rosa Jiménez, for example, complements her salary by working as a clown at children’s parties and, of course, she has gone for two months without those additional earnings.

RELATED CONTENT: Colombia: Protests Against the Lockdown Due to Lack of Food Aid

In the barrio, life goes on

Those who live in quarantine and social distancing in the more formal areas of Caracas may have a wrong idea of what happens in the barrios, where life passes a little closer to normality. This is how Ana Peraza, who lives in La Vega (Caracas), sees it. “Well, here in the barrio, businesses continue with their usual sales and the movement is normal, of course, with prices skyrocketing and only until noon because that is the permission they have from the authorities.”

How do people survive? Well, more or less in the same way that it has done in previous years with shortages, lack of cash, hyperinflation and blackouts. “The pedlars have not stopped going out to sell coffee, cigarettes, among others,” says Peraza. The grandparents survive on the pension and with the Patria System bonuses, but they have had to reduce their diet because it is enough for almost nothing. Public employees round out their salaries with bonuses and rummages, selling cheeses, pastry dough or anything else that moves. ”

As in times of the so-called “economic war”, many families have had to adopt the habit of eating only two meals a day: one at mid-morning and one at the end of the afternoon. There is not enough for more.

Thanks to the fact that in many poor families there are one or more members with professional or technical training, freelance jobs paid in dollars have been a lifeline, as have remittances sent by relatives who migrated. However, given the employment difficulties that Venezuelans are experiencing in other countries, in many cases these incomes have already ceased or are at about to cease.

For health workers and others in prioritized sectors living in popular areas, survival becomes much more difficult than it already was. Those who do not have their own vehicle have to pay for public transport and, once again, they face the problem of a lack of cash. As an example, Peraza says that for the residents of La Vega, the passage is 10 thousand bolivars through “La India” and 30 thousand bolivars through the Panamericana.

Others who live from day to day and, therefore, cannot stop working, are just the drivers of the peripheral bus/jeeps routes. “The jeeps drivers have to get up early and stay in queues for hours to load gasoline.”

The ingenuity, already experienced during previous calamities, emerges again. In popular areas, bartering for food such as rice, pasta or grains has become common. Due to the needs inherent to the pandemic, they have now also switched to chlorine and liquid soap.

“People manage, but what I hear the most is the complaint about the cost of the products, since obviously the merchants are gauging us with the prices. Nor do they stop talking about the rise of the dollar,” Peraza summarizes.

People who years ago quit their regular income jobs and took on the challenge of their own business also experience the shocks of the economic crisis associated with the pandemic.

In the Valles del Tuy, Juan Lugo and his wife weather the storm by carrying out severe austerity measures while continuing to work, very consistently, on their wooden crafts. “In recent times the food supplement delivered through the popular organization, the Local Supply and Production Committees, has helped us a lot. In our case, since we are only two people, it supports us quite well. In addition, we also add the help that the bonds signify, delivered by the system of the Carnet de la Patria. In our case, we received the Hogares de la Patria bonus the special bonuses, which generally come to both of us, and in the current circumstances, the Stay at Home bonus has come out for me, for people who are self-employed.”

The couple has their two children in Peru, but the activities they do (in a music school and making home deliveries on motorcycles) do not produce enough for them to send remittances.

“On the other hand, I have a nephew in Argentina, who on a monthly basis sends us approximately the equivalent of a Homeland voucher,” says the artisan, a retired university psychologist. I tell him that he gives me my coffee, that is, that I give myself the ‘luxury’ of continuing to drink coffee daily thanks to his help.”