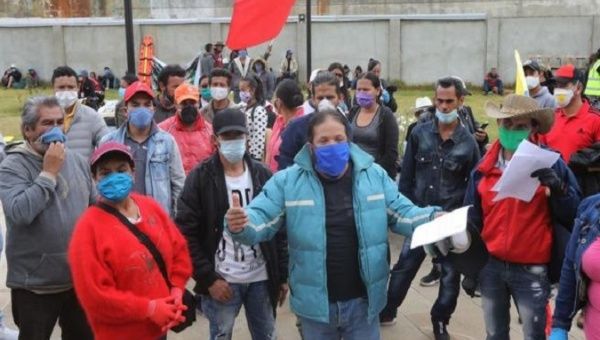 Colombia’s impoverished sectors are protesting because of the lack of resources during the ongoing COVID-19 quarantine, local media reported on Wednesday.

The Colombian government implemented social distancing measures as a preventive measure against the virus on March 25. Since then, the poorest citizens face the paradox of remaining in their homes to preserve their health or leaving to seek sustenance.

The lack of efficient aid plans by the government of Ivan Duque triggered this situation and social crisis in addition to the health emergency that the South American nation is experiencing.

“We spoke with inhabitants of the town of Ciudad Bolivar in the sector of Arborizadora Alta who assure us that the District (authority) has not been present there.“

Residents of Ciudad Bolivar, south of Bogotá, explained that they cannot remain in isolation because they must provide for their families and look for resources. Local citizens denounced the government’s failure to comply with agreements on health and food.
“I am an independent trader and this crisis has hit us in all areas. Trade is broken, leases are running [out] and businesses are closed. From the smallest to the largest all are affected by this crisis,” said Angel Mendez, a social leader in the town.

According to Méndez, government aid is still expected. Méndez said Bogotá’s mayor, Claudia López, announced 50% of the aid will be delivered. “If we see and talk to the people of the territory, none of them have received it or have been counted,” the leader added.

Colombian political personalities and Duque’s opposition assured this governmental mismanagement could cause a civil crisis. Congressional representatives from different parties expressed their concern: even though the President says he will maintain the confinement, millions of people will take to the streets in the next few days. Not enough tests have been done and there are no conditions to avoid massive contagion, said senator and human rights defender in Colombia, Ivan Cepeda Castro.

Protests amid the pandemic could increase the virus’ spread. So far, Colombia registers 4,149 positive cases, 196 deaths and 804 recoveries but the figures have been highly questioned by experts.