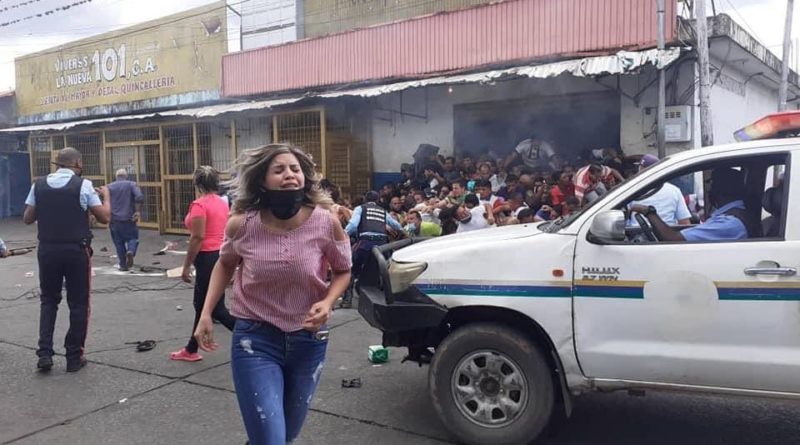 Bolivarian National Guard (GNB) detained ten people. Unofficially it was revealed that there was one deceased. According to the president of Fedecámaras Bolívar, José Alfredo Olivo, four retail stores were looted.

On the morning of Wednesday, April 22, minor protests and an attempt to loot were recorded in Cumanacoa, Sucre state. This Thursday, April 23, another small town, this time in Bolívar state, was also the scene of looting: Upata.

During the riots, people complained about the constant increases in food prices and the rise in the price of the dollar. This Thursday the exchange rate was above 200,000 bolivars per US dollar.

The economic crisis in Venezuela, aggravated by US sanctions and blockade, and more recently the radical drop in oil prices, is putting additional tension on the exchange rate that has move from Bs. 75,000 per US dollar two weeks ago to Bs. 202,000 per US dollar as of today. This situation adds an explosive element to the already not-under-control inflation spree in Venezuela.

According to the president of Fedecámaras Bolívar, José Alfredo Olivo, the rise in the price of the parallel dollar was the trigger for this situation, due to the rise in the prices of products, in the midst of a crisis that Venezuela was already facing and which was aggravated by the quarantine to control the Covid-19 pandemic.

Brigadier General Adolfo Rodríguez Cepeda, through the official Twitter account of the Bolivarian National Guard (GNB) Zone Command of the Bolívar state, reports that 10 people were arrested for looting and that the situation had already been controlled.

According to the journalist Eleazar Urbaez, through his twitter account, there were “several wounded and one person dead”, but this version has not been confirmed by the authorities.

Twenty-four hours before the events in Upata, a small incident of protest and looting attempt was recorded in Cumanacoa, Sucre state. In Sucre, there were seven arrests.

Featured image: Unidentified woman trying to escape from the looting situation in front of a grocery store in Upata. From twitter: Eleazar Urbaez @FEDGLOCK