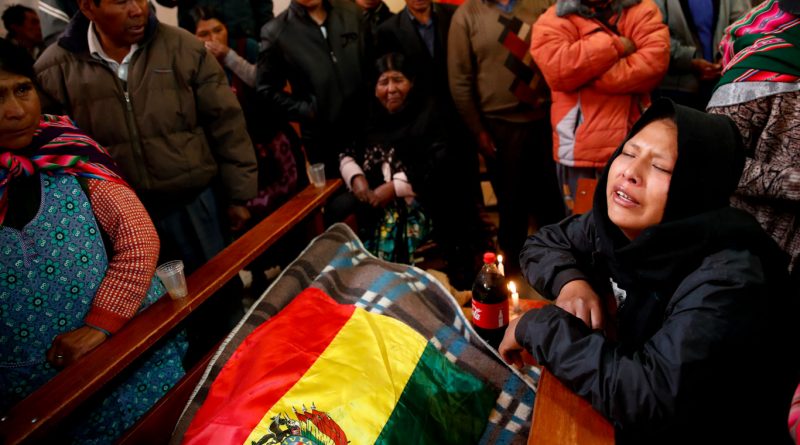 While some may be surprised by its response to the Bolivia crisis, Human Rights Watch’s support for a U.S.-backed right-wing coup is no aberration.

Bolivia is currently in turmoil after President Evo Morales was deposed in a U.S.-supported coup d’état on November 10. The new coup government forced Morales into exile, began arresting politicians and journalists while pre-exonerating security services of all crimes committed during the “re-establishment of order,” effectively giving them a license to kill all resistance to their rule. Dozens have died and massacres of indigenous protesters have occurred in the city of Cochabamba and the small town of Senkata.

In confusing and alarming situations such as these, millions of people around the world look to international human rights organizations for leadership and guidance. However, far from standing up for the oppressed, Human Rights Watch has effectively endorsed the events. In its official communiqué, it refrained from using the word coup, insisting Morales “resigned”, its Americas Director José Miguel Vivanco claiming the President stepped down “after weeks of civil unrest and violent clashes” and does not even mention opposition violence against his party or the role of the military in demanding, at gunpoint, that he resign. Therefore, Morales mysteriously “traveled to Mexico,” in the organization’s words, rather than fleeing there to escape arrest. Instead, it tacitly endorses the new government, advising it to “prioritize rights.”

Human Rights Watch Director Kenneth Roth went further, presenting the elected head of state fleeing the country at gunpoint as a refreshing step forward for democracy, claiming that Morales was “the casualty of a counter-revolution aimed at defending democracy…against electoral fraud and his own illegal candidacy,” noting that Morales had ordered the army to shoot protesters.

Bolivia’s Evo Morales was “the casualty of a counter-revolution aimed at defending democracy..against electoral fraud & his own illegal candidacy. The army w/drew its support because it was not prepared to fire on people in order to sustain him in power.” https://t.co/jeVnGta0Kk

Roth also described the coup approvingly as an “uprising” and a “transitional moment” for Bolivia, while presenting President Morales as an out-of-touch “strongman.”

The most important thing now in this transitional moment for Bolivia is ensuring that authorities reestablish the rule of law and protect fundamental rights, including to protest peacefully and to vote in transparent, competitive, and fair elections. https://t.co/ayWcCKdedS pic.twitter.com/WdxFmxEuhw

New self-declared President Jeanine Añez, whose party received 4% of the vote share in the October elections, has already expelled hundreds of Cuban doctors, broken off ties to Venezuela and pulled Bolivia out of multiple international and intercontinental organizations and treaties. She describes the indigenous majority of Bolivians as “satanic” and insists they should not be allowed to live in cities, instead, being sent to the desert or the sparsely populated highlands. Añez declared that she is “committed to taking all measures necessary to pacify” the population.

“I dream of a Bolivia free of satanic indigenous practices. The city is not for the Indian: they should go to the highlands or the desert” – new US-backed self-declared President of Bolivia Jeanine Añez. pic.twitter.com/fD7jpnYJHX

Human Rights Watch described the law giving Bolivian security forces complete impunity to kill dissenters as a “problematic decree,” as if Añez had used racially insensitive language, rather than was ordering a massacre. In its statement, it noted that “nine people died and 122 were wounded” during the Cochabamba demonstration, leaving its readers completely in the dark about who died and who was responsible for the killing.

A long history of double standards
Human Rights Watch was originally established in 1978 as Helsinki Watch, an American organization dedicated to exposing the crimes of Eastern Bloc countries and monitoring their compliance with the Helsinki Accords. Since its establishment, it has consistently been criticized for being an agent of U.S. foreign policy, employing former U.S. government officials in key positions, and for displaying bias against leftist governments unfriendly to the United States.

For example, a 2008 report on human rights violations in Venezuela authored by Jose Vivanco was immediately panned by hundreds of academics and Latin American scholars, claiming the “grossly flawed” document “did not meet even the most minimal standards of scholarship, impartiality, accuracy, or credibility.” Indeed, Vivanco openly stated his biases, revealing that he wrote the report “because we wanted to demonstrate to the world that Venezuela is not a model for anyone.”

Human Rights Watch’s deep ties to U.S. corporate and state sectors should disqualify the institution from any public pretense of independence.”

Likewise, Amnesty International’s image as a defender of human rights hides a dark past of being effectively a front organization for Western governments. As MintPress News revealed earlier this year, one co-founder of the organization, Peter Benenson was an avowed anti-communist with deep ties to the British Foreign and Colonial Offices, propping up the Apartheid regime of South Africa at the British government’s request. Another co-founder, Luis Kutner, was an FBI asset who was involved in the government’s assassination of Black Panther leader Fred Hampton. Kutner went on to form an organization called “Friends of the FBI”, dedicated to countering and combating criticism of the Bureau.

Therefore, while some may be surprised by its response to the Bolivia crisis, Human Rights Watch’s applause of the U.S.-backed right-wing coup against a democratically elected leftist head of state may not be an aberration or a mistake, but it performing its actual purpose in reinforcing U.S. hegemony by condemning any leftist challengers in America’s “backyard.”