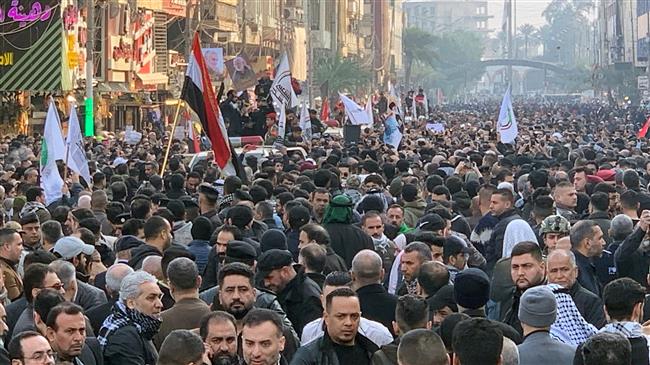 The US assassination of the two commanders at Baghdad airport in the early hours of Friday has triggered a wave of rage among Iranians and Iraqis, and forged an unprecedented unity with vociferous calls for revenge.
Both Soleimani and Muhandis were popular figureheads in helping squelch an ominous rise of Daesh which once came as close as 30 km to Baghdad, while the US withdrew troops from Iraq and looked on.
RELATED CONTENT: Activists Speak: Why We are Protesting Against the War on Iran
Images of the Iranian commander tagging along with Iraqi fighters at frontlines as the ferocious battle against Daesh terrorists went on are endearingly etched in the minds of many Iraqis.
Their massive turnout in Saturday’s funeral is both a testimony to Soleimani’s popularity among many Iraqis and a message to the US which made its stay in the Arab country more unwelcome with the extrajudicial killing, observers say.
In all, 10 people — five Iraqis and five Iranians — were killed in Friday morning’s US strike on their motorcade just outside Baghdad airport as Soleimani’s flight arrived from Syria, leading to speculations that Israeli intelligence played a role.
On Saturday, Iraq’s Prime Minister Adel Abdel Mahdi joined Muhandis associate Hadi al-Ameri, senior cleric Ammar al-Hakim and other important figures in a large crowd accompanying the coffins.
Ameri, who has been named as the successor to Muhandis, and many other Iraqi leaders have called on all factions in Iraq to unite and expel foreign troops.
“We call on all national forces to unify their stance in order to expel foreign troops whose presence has become pointless in Iraq,” Ameri told national television on Friday.

The cortege set off around Kadhimiya, a pilgrimage district of Baghdad, before heading to the Green Zone government and diplomatic district where a state funeral was to be held attended by top dignitaries.

The convoy snaked its way though a sea of black-clad mourners, some of whom carried portraits of Iran’s Leader of the Islamic Revolution Ayatollah Seyyed Ali Khamenei.

The bodies of the Iranians will then be flown on Saturday evening to Iran, which has declared three days of mourning for Gen. Soleimani. His funeral is to be held on Tuesday in his hometown of Kerman in central Iran.

Funeral processions would also be held on Saturday in the holy cities of Karbala and Najaf.

The Pentagon said in a statement on Friday that President Donald Trump had ordered the US military to assassinate the top Iranian commander.

Iran has warned that “harsh revenge” is waiting for the US following the strike that killed the leader of the Quds Force.

Featured image : Hundreds of thousands of Iraqis take part in the funeral procession of Lieutenant General Qassem Soleimani and Abu Mahdi al-Muhandis, both assassinated in US airstrikes in Baghdad, on January 4, 2020.