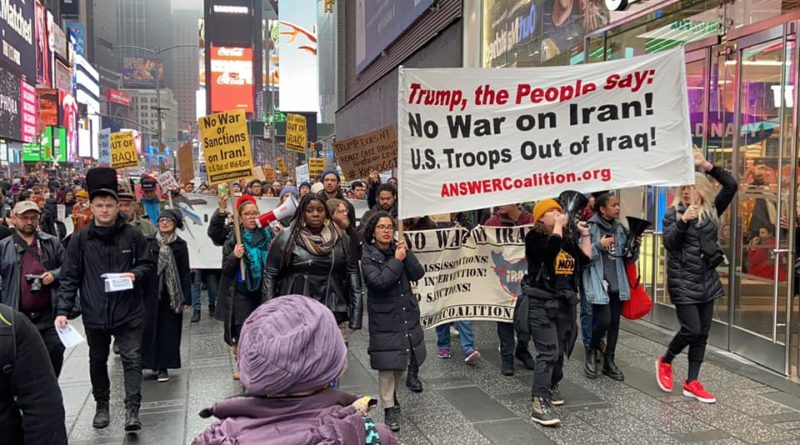 1,000s of people are filling the streets of over 80 cities in the United States to say no to the U.S. war of aggression against Iran. Activists from across the country are organizing and speaking out. They are opposing another war based on lies in the interests of U.S. supremacy. The U.S. anti-war movement – like we knew it would – is making its presence felt once again. There remains much work to do, but we must and will bring a halt to the U.S. war machine. Together, we can institute a better world based on peace, justice and self-determination. Great thanks goes to the ANSWER Coalition and CODEPINK Women for Peace for being the main organizers of the nationally coordinated actions on January 4.

Below are some of the important voices from the front lines of the movement against the war on Iran:

** More quotes will be posted as they come in. So, check back. If you would like to add a quote, message MASS ACTION on facebook.

** The views here are not necessarily those of MASS ACTION. MASS ACTION rejects all attacks on Iran as it faces off against U.S. aggression.

“I am protesting the US assassination of Iranian General Soleimani because it was a treacherous and illegal act that will certainly escalate violence in the Middle East. It’s important to protest to show public opposition to the crimes of the US government, but also to show the international community, especially Iraqi and Iranians that there are people in solidarity with them.”

The over 70 rallies being held around the country in the US today shows the resurgence of an anti-war movement in this country and clearly demonstrates that the American people don’t want another disastrous war in the Middle East.

We believe the blame for this confrontation lies squarely at Trump’s doorstep. Not only was the assassination of Soleimani an immoral and reckless decision, Trump’s decision to withdraw from the successful 2015 nuclear agreement with Iran known as the Joint Comprehensive Plan of Action, and his subsequent launch of a systematic campaign of “maximum pressure” placed the US and Iran on a collision course.

The American people are in the streets today because they’re showing that they don’t want another war in the Middle East which will only serve to kill millions of innocent civilians.

The US must immediately end the military attacks, lift the harmful sanctions, return to the Iran nuclear deal and reopen diplomatic channels. The U.S. military and its contractors, who should not have been there in the first place, should get out of Iraq and the entire region.”

“An act of war was committed on a sovereign nation and it’s my responsibility to raise my voice against it!”

“It is necessary for us to massively condemn the assasination and all other ramped up efforts towards military sanctuons against Iran to prevent a war from occuring. In addition to the deaths and casualties of innocent people, who are always the ones paying the true cost of war, this war could destroy our entire planet. We have to oppose the capitalist lust for war at all costs and refuse to allow billionaires to set off deadly series of events to full fill their insatiable appetite for profit at the expense our the rest of our lives.”

Kofi Ademola, an organizer in the Movement for Black Lives

“In 2016 we participated in mass protest against Trump & fascism all across the country. We shutdown airports against the Muslim ban, we occupied ICE dentition centers & more. Unfortunately we didn’t sustain these efforts. Now in 2020 we have to become ungovernable, we have to disrupt capitalism and we have to really shut shit down. Our very lives are dependent on destroying capitalism & white heteronormative supremacy. Climate change, imperialist wars, racism, oppression & worker exploitation is home grown, we are literally in the belly of the beast & if we don’t starve it, it will consume us all!”

Dan Kovalik teaches International Human Rights at the University of Pittsburgh School of Law and is the author of the book, “The Plot To Attack Iran”

“This is a critical moment in the history of the US and of the world. We must step back from the precipice of war with Iran — a war which would surely lead to the death of tens of thousands of Iranians, thousands of Americans and to the destruction of one of the oldest civilizations on earth. Such a conflict, which could very well draw in other countries like Russia and China, could also quickly became a world war. This is simply not something that humanity can afford now, or ever.”

“The recent aggression by the Trump administration is the greatest threat to peace in recent years. All antiwar groups immediately saw this and came together in a joint call to action. We are aware of actions in 79 cities across the country, these have been organized in only a couple of days, with out even acknowledgment by the corporate media.

These attacks by the US against Iran come at a time that Iran has just announce a find of a new vast oil field. It threatens to bring the entire region into war including Israel, Saudi Arabia, Iraq and Syria as well as NATO and possibly Russia and China.

The people of the US must once again take the streets and stay the hand of our government.”

“Anyone who cares about public education, medicare for all, free college, racial equity, and any social justice issue in our country, knows that war with Iran won’t just destroy lives but possibilities to change the priorities of our country. We cannot allow a xenophobic and unpopular president distract the country from solving our bigger problems by thrusting us into an unjust war in a country that we destabilized in the first place.”

“For us in Venezuela seeing our comrades in the US protesting agains the barbaric Assesination of General Soleimani is a sign showing that not everything is lost in that country and that not everyone is supporting imperialism. But protest should transcend and be use to push MSM and politicians to show them that people is fed up with all their garbage and lies.”

We needed this rally to quickly show opposition today. But we’re just the tip of the iceberg. There’s thousands more behind us.

“The US has been bombing the peoples of the region since the Afghanistan invasion 18 years ago. Yes, it is no secret that the Iranian government brutally represses lesbian, gay, and bisexual people. But is that any excuse to bomb the country and its people? How could bombing the queer and non-queer people of Iran possibly ‘help’ them? If that were the case, US ally Saudi Arabia should be in the crosshairs of such bombing, as well as the United States not too many years ago. Such arguments are nothing but an attempt to give a ‘queer’ gloss to US domination of huge areas of the world, a gloss that not horribly harms the peoples of the Middle East and fuels climate change, but means that the US has absurdly 5th-rate social services for queer and non-queer alike.”

“Protests are powerful and make a huge difference. As there are some that may question the purpose, history speaks for itself. No real change has ever been made without uniting people with a common goal. The current climate has proven that once people decide to stand together and be on one accord that anything is possible. Protests will continue to be an important resource to create intentional dialogue about issues [like a war on Iran] that plague our nation.”

“A social justice unionist is an anti-war unionist. Money that is used for war should be used here at home for education, healthcare, and housing. We see the devastation the constant war drive brings to our students and their families. Many of whom who are struggling day to day to survive. Most of my students are living in poverty, some of them are homeless. It is a crime that this country has hundreds of billions for war but not money to meet the basic needs of its people. The military recruits my students and others throughout this country to fight wars for the rich. These wars are not our wars, they are wars fought for the profits of multi-national corporations. A working-class movement is necessary to bring this money home to meet the needs of the people not for wars for the ultra-rich. All unionists must fight this endless war drive. Working class people demand an end to US imperialism.”

“At this stage in our country I would hope that those who have supported this President and his administration can start to see the absolute disregard for leadership, for peace and that their agenda stands solidly outside of greater public integrity. Of course, Iran [situation] is problematic on many levels, but one must look at the facts to see if this President is motivated by great good or self-service. Many would say the second!”