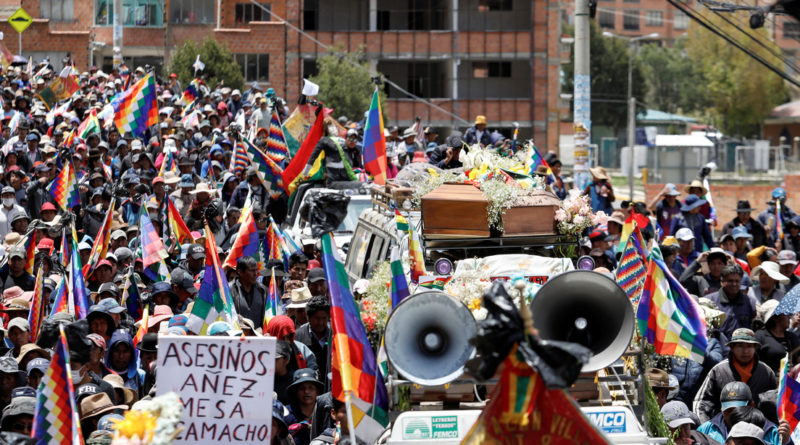 The objective is to prevent those who “are suffering” from knowing that their ills are due to “that illegitimate government,” says a coordinator of the Alliance for Global Justice.

In Bolivia, the association Cooperativa de Telecomunicaciones Santa Cruz (Cotas) announced this Wednesday that starting next Monday, December 2, it will cut the transmission in the country of RT in Spanish. In a notification received by RT, Cotas said that “the decision comes from the superior authorities of the cooperative, where they simply instruct us to withdraw the signal.”

Withdrawing the Russian signal in Spanish from Cotas services is a measure of the de facto government of Bolivia to control the information transmitted in the country and prevent Bolivians from “hearing alternative voices, ” says Chuck Kaufman, who shares the national coordination of the American judicial defense group Alliance for Global Justice.

RELATED CONTENT: With the Right-Wing Coup in Bolivia Nearly Complete, the Junta is Hunting Down the Last Remaining Dissidents

Commenting on the vague explanations Cotas gave RT, the expert said he was sure that “the orders come from the coup government or the oligarchy that owns that station [Cotas] and supports it.”

“They have to have control of the message . If people [in Bolivia] have free access to information, they will see that other people in their country are suffering and will know that the reason for that suffering is that military coup and that illegitimate government,” the expert explained to RT.

The news about the interruption of the broadcast of RT in Spanish in Bolivia comes just two weeks after a similar decision was announced – without prior notice or explanation – by the Ecuadorian public television service provider.

On November 15, the National Telecommunications Corporation of Ecuador (CNT) issued a statement addressed to its customers, in which it stated that it had changed the RT network in Spanish for three additional signals, “seeking to generate the best experience” in its content .

According to Kaufman, the fact that in less than two weeks already two Latin American countries stop broadcasting the RT channel is not a coincidence . “I am sure that all this is part of a US plan, prepared at Foggy Bottom,” said the expert, referring to the Washington DC government district where the headquarters of the US State Department is located.

“The [Latin American] governments were moving towards socialism and outside the US sphere of influence. Now that the Trump Administration is paying less attention to the Middle East, its interest is focused on regaining influence over Latin America,” he stressed.

Featured image: Supporters of the deposed president of Bolivia, Evo Morales, in a protest in La Paz, on November 21, 2019. Marco Bello / Reuters