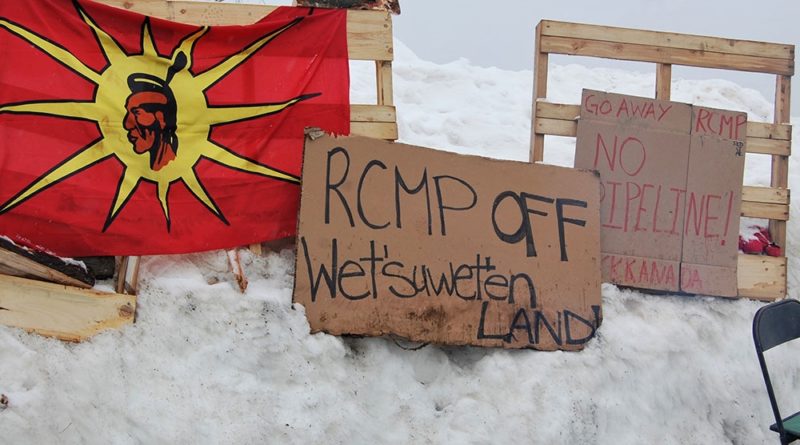 What is Happening in Wet’suwet’en?

“They’re invading our people again, starting in the wee hours of the morning, arresting people who have been providing food and medical supplies to our camps, who are camped out along the side of the road doing amazing and righteous work. And right now, they’re being arrested, and they’re being removed,” –Sleydo’ (Molly Wickham), spokesperson for the Gidimt’en land defenders camp, reported through a video on Facebook.

The people arrested that morning are supporters of the Wet’suwet’en hereditary chiefs who are opposed to the construction of the Coastal GasLink (CGL) natural gas pipeline on their territory.

Over the next five days, the RCMP continued to send heavily armed officers, supported by RCMP tactical teams dropped from helicopters, to arrest and forcibly remove peaceful, unarmed land-defenders. This was an armed invasion of unceded, sovereign Wet’suwet’en territory by the Canadian state.

The brutal invasion was an escalation of the ongoing RCMP occupation of Wet’suwet’en territory that intensified at the beginning of January 2020. At that time, the RCMP increased their presence on the territory to attempt to enforce an injunction order against peaceful land defenders who had set up camps along the Morice Forest Service Road. These camps were organized by Wet’suwet’en people and their allies to prevent CGL from access to Wet’suwet’en territory without the permission of the hereditary chiefs, who, under Wet’suwet’en law, have the right to control access to their lands.

With this occupation came continuous harassment and aggression by the RCMP. This includes the imposition of an arbitrary and ever-expanding exclusion zone which the RCMP uses to control the entry of supplies, media, lawyers, doctors, and Wet’suwet’en people into their own territory and the support camps. This RCMP blockade, as well as the brutal raids beginning in February all go far beyond the boundaries of the injunction.

RELATED CONTENT: Palestinians stand in solidarity with the Wet’suwet’en nation

The shamefulness of this attack on the land defenders is further intensified because the CGL pipeline project does not have all the permits that they need to proceed with the project. They are missing one permit from BC’s Environmental Assessment Office. The question is if the project is still delayed, then why the violent urgency?

Who Defines “Rule of Law”?

The Premier of British Columbia, John Horgan, has justified this continuing RCMP occupation and brutality by claiming the supposed necessity to uphold the “rule of law.” Of course, the “rule of law” that Horgan is referring to is the enforcement of the injunction and the construction of the CGL pipeline without the consent of the Wet’suwet’en heredity chiefs. However, this is not the only law that must be considered in any honest discussion about resource extraction and development projects in Canada.

Wet’suwet’en territory, as with over 95% of land in British Colombia, was never surrendered by Indigenous people to the government of Canada. Therefore, Indigenous nations have rights and title to their traditional territories, as has been proven in the Supreme Court of Canada case of Delgamuukw-Gisday’wa.

In their “Open Letter to Prime Minister Trudeau and Premier Horgan Re: Wet’suwet’en Hereditary Chiefs’ Opposition to Coastal GasLink Pipeline Project,” 40 lawyers and academics from across Canada explained about this landmark case, which happened in 1997:

“The Hereditary Chiefs, not the band councils, were the plaintiffs in the landmark Delgamuukw Gisday’wa case before the Supreme Court. The Court confirmed that the Wet’suwet’en never surrendered title to their ancestral lands, and accepted extensive evidence outlining their hereditary governance system. The fact that band councils have signed benefit agreements with Coastal GasLink cannot justify the erasure of Indigenous law or negate the Crown’s obligation to meet with the Hereditary Chiefs.”

Another “rule of law” that Horgan and the government of Canada are willfully ignoring is Indigenous rights, which are fundamental human rights. The United Nations has created a framework for these laws with the Universal Declaration on the Rights of Indigenous People (UNDRIP). UNDRIP calls for “free, prior and informed consent” of Indigenous nations regarding development projects on their territories. It also speaks against the forceable removal of Indigenous people from their land. The federal government of Canada claims to be currently working on UNDRIP legislation, while legislation to implement UNDRIP in B.C. passed in 2019.

Fundamental human rights must form the basis of any just law, and it is clear the laws that the federal and provincial governments attempting to impose are trampling all over Indigenous rights. This should not come as too much of a surprise as this is the same “rule of law” that colonial settlers have imposed on Indigenous people for 500 years and especially after the formation of Canada in 1867. This is the same so-called rule of law that facilitated and facilitating stealing Indigenous lands, and their children from their families, installed torture and brainwashing camps called residential schools, and attempting to erase language and culture, as well as exterminating millions of Indigenous people in Canada. This is the “rule of law” that is useless when it comes to the over 100 Indigenous reserves in Canada that don’t have access to clean drinking water, sanitation or basic health care and housing.

As recently uncovered by the Narwhal, this is also the same “rule of law” that tried undermine the Delgamuukw-Gisday’wa decision almost immediately after it was released over 20 years ago. Provincial negotiators for benefit agreements between development projects and Indigenous nations suggested “using federal funds intended for the healing of residential school survivors to advance treaty negotiations,” in desperation to “sweeten the deal” so that Indigenous people wouldn’t be tempted to invoke the Delgamuukw-Gisday’wa decision in defense of their rights.

Indigenous Rights Are Human Rights
According to the Yellowhead Institute, LNG Canada, of which the CGL pipeline is one component, received $5.35 billion in subsidies from the provincial government and an estimated $1 billion from the federal government.

As Wet’suwet’en Hereditary Chief Dsta’hyl explained in a press release on January 15, 2020 – “The problem we are faced with is that the Horgan government has invested billions of dollars of taxpayer’s money to subsidize the CGL project. This investment is being used to undermine Wet’suwet’en authority and empower CGL to proceed using the full force of the RCMP and judicial system.”

The struggle of the Wet’suwet’en has once again laid bare the empty claims of “truth and reconciliation,” spoken by Prime Minister Justin Trudeau. Although the federal government attempted to shuffle the responsibility for the CGL pipeline off to the provincial government, Trudeau can call the RCMP off Wet’suwet’en land and put an end to the construction of the Coastal GasLink pipeline.

What this comes down to is that once again, the government of Canada is putting the interest of capitalist profits ahead of fundamental Indigenous rights. Chief Dsta’hyl has rightfully placed the responsibility for the current violence, and any economic impacts from ongoing solidarity actions, squarely where it belongs, on the shoulders of the provincial and the federal government of Canada. Trudeau and Horgan alike continue to promote, subsidize and approve mass resource extraction projects with no regard for Indigenous rights and Mother Earth.

Coast to Coast Action is Growing!

In response to the attack on Wet’suwet’en land defenders, there have been hundreds of actions organized calling for RCMP out of Wet’suwet’en and in solidarity with the Wet’suwet’en hereditary chiefs fight for their sovereignty. This struggle is much bigger, and more fundamental to the colonial foundations of the state of Canada then a struggle against a dirty, climate killing pipeline alone.

Across Canada, there have been rallies and marches, street and intersection protests and blockades, rail blockades, occupations in government offices, and fundraisers. Most of these actions have been Indigenous-led solidarity actions, including a strong rail blockade by the Mohawk nation at Tyendinaga.

However, these actions for Wet’suwet’en are as powerful, spontaneous, independent, and continuous as they are because they are not only about Wet’suwet’en rights or the CGL fracked-gas pipeline. This is about 500 years of colonialism, colonial settlement, genocide, and 150 years of repression since 1867 by the settler state of Canada.

As Sleydo’ (Molly Wickham) said in an interview on the Los Angeles-based radio show Sojourner Truth with Margaret Prescod, on January 16, 2020, “We see this fight as bigger than just us as one nation within so-called Canada. This is really a struggle for Indigenous sovereignty and Indigenous rights globally.”

In the face of the oppression and racism Indigenous people confront every day, the struggle of the Wet’suwet’en for sovereignty and their rights has reached a critical point, one that threatens “business as usual” in Canada. The climate justice movement must recognize this and join in the struggle for Indigenous rights. Poor, working and oppressed people must unite to demand that the RCMP end their occupation of Wet’suwet’en territory immediately and stand with the Wet’suwet’en nation in its fight to assert its rights against the government of Canada, TC Energy and the Coastal Gaslink Pipeline.

Whether it is the struggle in solidarity with the Wet’suwet’en, or the Trans Mountain Pipeline expansion (TMX), which is planned to bring toxic tar sands oil from Alberta to the coast of B.C., what the government of Canada is most afraid of is our unity as poor, working and oppressed people.

Mass media, the RCMP and government officials initiated their campaign of lies and manipulations about Wet’suwet’en and the actions to defend Indigenous rights as soon as this struggle began. What they are most afraid of is that Indigenous and non-Indigenous workers, students, and immigrants, will unite in defense of Indigenous rights. The capitalist ruling class in Canada is fully aware that our unity for Indigenous rights is a further expansion of rights for all oppressed people in Canada. This unity has the potential of developing the mass of working class and oppressed people into people who think socially and act politically for change. And this will be a fundamental change, nothing short of dismantling capitalism.

The government of Canada has spent untold millions of tax-payer dollars occupying and invading Wet’suwet’en to try to teach Indigenous people in Canada a lesson about that what will happen if they assert their fundamental human rights. This violence and intimidation are not only used to target Wet’suwet’en land defenders and their allies, but also to try to convince non-Indigenous people in Canada that Indigenous people are against the rest of Canada – that they are against our jobs, against our comfortable life, and they are violent and dangerous and must be suppressed with a great force. The capitalist ruling class in Canada is reinforcing the law of the jungle, which exists only for animals; that means comfort for one must mean inconvenience and an insubordinate life for others. We must remind all these capitalist thinkers and politicians that human rights are based on equality in fundamental rights, law, and life.

To build a movement for Indigenous rights, we need sustained campaigns and mass actions based on the demand for self-determination for all Indigenous nations and Indigenous rights in Canada. All this means constant and consistent coordination and mobilization between Indigenous people and climate justice organizations and activists. Together we are stronger, and we will win. 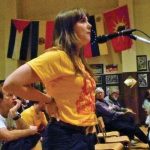