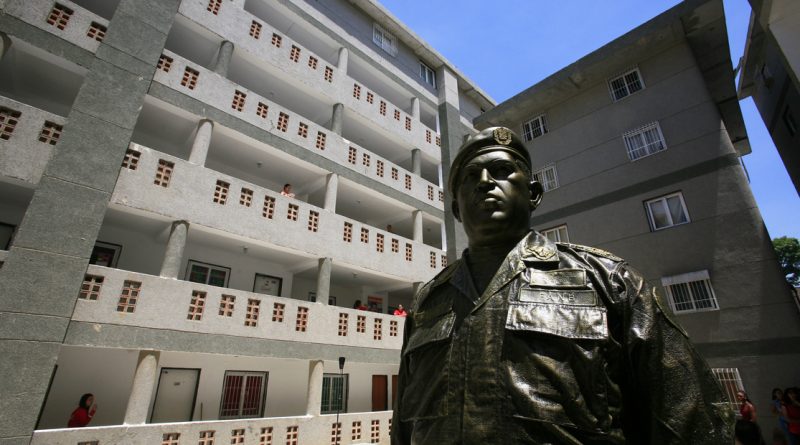 In the Antímano neighbourhood of the capital district of Caracas, a very special block of flats has been built. Its inhabitants built it with their own hands, after 2011, on the initiative of President Hugo Chávez, a little less than one hectare of land was expropriated from the Polar company. The idea was to rescue abandoned urban land that did not fulfill any social function, to benefit families in a situation of “social risk, without their own housing and young couples who are founding families”.

Camp Amatina is located in an industrial zone, but other camps were also set up “in upper class, middle class and peri-urban areas, adapting to urban contexts with different characteristics” – explains Housing Vice-Minister Nelson Rodríguez. In Amatina there are about 140 families that meet in weekly assemblies. Iraida Morocoima, one of their spokespersons, welcomes visitors to share this experience: “many people among these families had no idea how to hit a brick. There were certainly others who were bricklayers, but most of us were women. The first challenge was to assume that a five- or six-story building had to be built; it was difficult, we couldn’t even conceive of it”. To get there, the pioneers relied on construction materials and technical advice provided by the state as part of the Gran Misión Vivienda Venezuela.

The architectural plans were studied and finalized under the supervision of the future inhabitants, based on the specific needs of each of the families. “This served us as a tool to give a different approach to this type of urbanism. If we had not politicized this construction, we would have fallen into the error of reproducing the family model advocated by capital: housing spaces conceived only for a male and a female, even changing their skin color… But we said no, because here there is a prototype of a different family. Our goal was to build a community”. An example? “There are no elevators in the building, so elderly and disabled people live on the ground floor. Before coming here, that disabled girl had nowhere to share. Now here we have this meeting space, where she can come and participate in parties like Christmas,” says Moracaimo.

Once they obtained state support through technical assistance, the camp established a model of self-managed construction, with no construction companies. In this way, “for the State, the cost of the project was reduced by half” – concedes Nelson Rodríguez. But the most relevant thing is the dynamic of participation that it provoked, with “hundreds of hours of organization of the families and the other 11 movements of settlers that came to their aid: material and resources were lent, it functions as a network, a system in which workers exchange, a joint purchase of machinery is made, etc.”.

Once the housing was raised as a right, returning the use to an abandoned land, the tool for the community to consolidate its objective was to assume self-government. It is one of the basic notions of this camp. “This is the first project that was carried out, and surely there are many mistakes that we made, with cracks in the wall, but we are learning. And the most important thing is what we have learned with this participatory design, because we are very aware that living here has to be different. This is a well-established idea among the families, including the younger ones. As I climb the stairs of the block of flats, I comment to a child who accompanies me how grateful the community must be to the Bolivarian government. His spontaneous response breaks in a thousand pieces the concept of “assistentialism” that has been recurrently applied as the characteristic seal of the Latin American processes of socialism in the 21st century: “We make this Revolution, nobody gives it to us !”.

Nelson Rodríguez insists on the idea that the Amatina camp is not just a housing : “they are not only houses, but also community spaces, productive spaces such as cooperatives, communal gardens, and communal services such as a bank, a bakery, a factory… What is sought is the construction of a community of life and means of production based on self-management. It is an integral project of production and supply”. There are those who relativize this type of struggle for the right to housing, giving lessons from their ivory tower, but for others it is intolerable and must be ended in any way: “many economic sectors did not accept this state intervention. The right wing says there are processes of land confiscation. They intend to return them, as they were confiscated by the Revolution. It is a battle, the company wants to initiate a process to recover them”. Far from being conceived as an isolated experience, its protagonists seek to extend it to the length and breadth of Venezuelan geography in order to strengthen the construction of the “communal state,” destined to undermine the foundations of institutionality and thus progressively replace the old state structures, tailored to the needs of the ruling class throughout decades of Punto Fijo government. It is therefore a question of deepening participatory democracy to the detriment of “restricted democracy”.

Without a doubt it is communal experiences like Amatina’s that best explain the quixotic mood and the unbribable attachment of this people to his government; also why Nicolás Maduro was re-elected president in May 2018 defying the economic crisis, the threats of the coup right-wing, the announcement of non-recognition by the EU and the sanctions of the Obama empire and then Trump. Morocoima sums it up like this: “We didn’t plan to live here and then become another social class. We live here to defend the Revolution, to maintain this revolutionary process. This is a dignified and struggling people: Chávez came, he revived Bolívar and now we are Guaicaipuro, Bolívar and Chávez together!” The indigenous, the Creole and the mestizo are symbols of the sovereignty of Venezuela and of its generous identity for the sake of integration; their incarnation in those three historical figures is the sample of the fact that this people made reality what seemed impossible: holding the reins of their destiny against all odds.