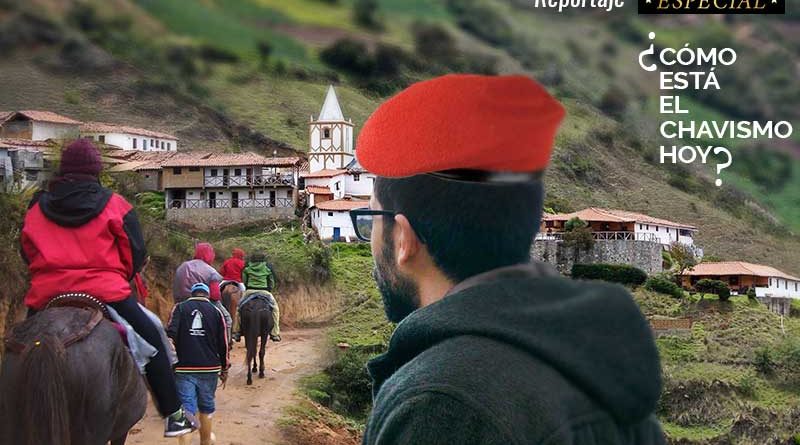 Read below the second report in our series of special works on Chavismo. In the following, Los Nevados, the highest town in Venezuela, in Mérida State, tells whether its historical support for Chavismo remains equally high.

The expression “hill climbing” is used in Venezuela to refer to the need for politicians and their proposals to reach everywhere, especially out in the most popular classes settled in the mountains of the oil country, seems to fall short to explain the support that Chavismo historically has in the highest parish in Venezuela: Los Nevados, in the state of Mérida.

In this town nestled in the Sierra Nevada at 2,475 meters (8120 ft) above sea level, Nicolás Maduro obtained for his re-election, in the last presidential elections of May 2018, 88.52% of the total votes. There the broad support for the Revolution is historic, since the first election of Commander Chávez. Supuesto Negado interviewed some inhabitants of this humble farmhouse built in the foothills that descend from El Toro peak (one of the five that form the Venezuelan “Sierra Nevada” within its Andean mountain range) to learn how they face the economic crisis, what they think of the current political situation and, more importantly, if they continue to support the Bolivarian Revolution and President Maduro.

Melanio Sánchez has 22 years of working as a driver in the Los Nevados Transportation Line and is currently the president of this company. For more than two decades, he has taken tourists to his hometown from the “Parque de Las Heroínas”, in the capital of Merida, 16 kilometers inland on the winding and uneven road called “El Morro”.

“I am not a politician, I support and vote for the one who does it well,” clarifies Melanio, with that particular slow accent of the Andean people.

He explained that tourism has greatly declined for about three years. “Here before there were four cars that went up daily with tourists from outside. The ticket and the inns were cheap and queues of people formed to climb. That no longer happens. Now, maybe one or another Venezuelan tourist comes along. But imagine 50 thousand bolivars the passage to go up, everyone has tightened their belt,” he said.

With the humility that characterizes the inhabitants of the mountain, he explains that although “he has no writing skills because he hurriedly studied up to third grade”, he considers that governments are looking for strategies to have the people subjected like curbed horse. “If I feel like having the horse like that (reined in), I shorten the lead. So, I swear, the government is doing that right now,” he said.

However, he stressed that “one has to be honest”. “After Chavez died, the things stopped working because he was the only one who had the desire to fix it. They legally did nothing more,” he said.

But do you currently support President Maduro? Would you vote for him?
Right now I would not vote for him. But not for the others, either.

Is it the fault of Trump or Maduro?
At the exit of the cable car we find Marcos Peña, a resident of Los Nevados who went down to Mérida “to run some herrings.”

In addition to the road, another way of arriving (or leaving) the remote town is by the funicular (tram on a cable) of the Mucumbarí complex, since the fourth station is two hours away, on the back of a mule, from the icy town.

Thanks to an agreement of the regional government with the community, the almost one thousand inhabitants of Los Nevados do not pay the amount of the cable car ticket (20 thousand Bs.).

Marcos (a farmer) says the crisis is very hard and everyone talks about the same. “One now, more than anything, brings things to barter, because it is difficult to sell the crop,” he said.

It is not a minor fact. The populations of the Andean mountains live mainly from agriculture, however, at this time it is difficult to plant and harvest, mainly due to the high costs of fertilizers and transportation freight.

“On the one hand, they say it’s Trump’s fault and the blockade. On the other, that it’s the fault of Chavez and now Maduro. The truth is that the thing is very difficult and to top it off, the town remains more in darkness than with light,” Marcos says in reference to the frequent power cuts suffered by the inhabitants of Merida and in general the entire western area of Venezuela.

When asked if he currently supports President Maduro and the Revolution, he is silent for a few seconds, evades the question and says goodbye. The lack of response is eloquent.

Migration left the town without teachers or priest
Benito Dugarte arrived in the early hours of the afternoon to the cable car to return to his home in Los Nevados. He exchanged a few kilos of figs from his harvest for some used clothes and sold a sack of potatoes at one of the restaurants in the area. He agreed to talk only if “he wrote everything because journalists say purely what suits them.”

The first thing he commented is that a couple of weeks ago, they made the census again for the delivery of the CLAP and on this occasion, they wanted to force him to sign a sheet in support of Maduro, “I told them: If you want to sell it to me, sell it to me, but I am not going to sign just because. In the end they sold it to me,” he acknowledged.

On the impact of the crisis on the inhabitants of the town, he highlighted the migration of young farmers and promoters of local tourism to Colombia, Ecuador and Peru. “Many have left because here they fail to make enough “pa´l alpiste” (to eat).”

He said that this migration mainly affected the Liceo Juan de Dios Dávila, the only one in town, which was left without teachers of various subjects.

He also told us that even the priest was gone and they have been without priest in the parish for more than two months. “But that does not depend on the government,” said this chronicler. Do you currently support President Maduro? Would you vote for him?
“I am a Chavista and I voted for Maduro because Chávez ask us to do so. Then again, because we had to give him support. How is the thing right now, I don’t know. The commander was a giant. Imagine getting to where he came by dragging all these manganzones (lazybones)!”

Some “turned around”, but Los Nevados is still Chavista
Despite the remoteness of the town, the WhatsApp signal arrives thanks to the Wi-Fi of Plaza Bolívar and the Cantv connection center that has been operating since 2012. In this way, we interviewed Cleris Contreras, president of the El Morro Community Council.

With the passionate and characteristic speech of the PSUV grassroots militants, Cleris said that the empire’s strategy is to end the daily peace and tranquility of Venezuelans to generate anxiety and thereby blame the government for everything.

“I will not deny that there are many infiltrators within the Revolution and the party. Right here in Merida there are some individuals who say one thing and do another.

People who have made money through corruption, but they are not the majority,” she said.

I have interviewed several people from Los Nevados who previously voted for
Chavismo and now they are not very sure of supporting the Revolution in an election …
“Of course, with the economic war and the attacks of the right, some comrades who do not understand the situation well have turned around. But they are not the majority, Los Nevados is still a Chavista and revolutionary people. ”