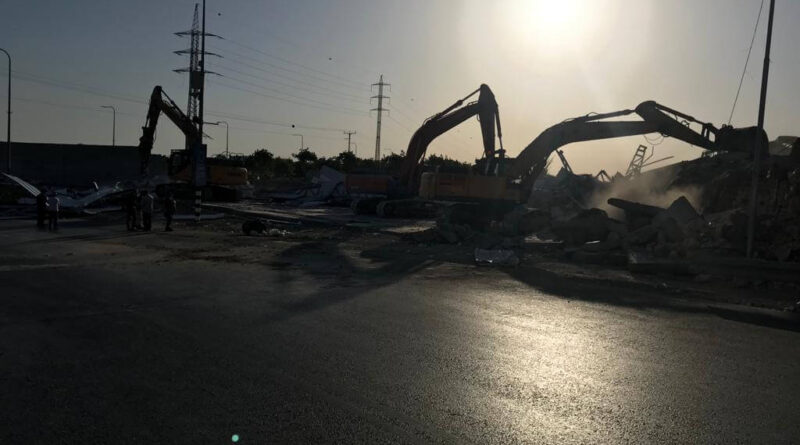 “When we woke up in the morning to find the building destroyed, we were shocked,” landowner Raed Maswadeh tells Mondoweiss

As the number of coronavirus cases in Palestine continue to soar, Israeli forces demolished this week a COVID-19 testing clinic in the city of Hebron, the epicenter of the outbreak in the occupied West Bank.

According to locals, Israeli forces demolished the clinic in the middle of the night, just before sunrise on Tuesday morning.

Tuesday’s demolition took place just over one week after Israeli forces delivered a stop-work order on the building.

The order gave the landowner, who had charitably donated the plot to the Hebron Municipality, 96 hours to prove he had building permits.

RELATED CONTENT: Israel Leaks Evidence of Its Involvement in Covert Iran Bombing Campaign that Threatens to Spark a Wider War

If he did not provide Israeli-approved building permits, the order said, the clinic would be destroyed.

The owner of the land, Raed Maswadeh, told Mondoweiss that over the course of the past week, he had been working with Israeli authorities to retrieve the proper building permissions.

Because the land, located right at the entrance to Hebron City, is located in Area C, any sort of construction or work on the land requires Israeli permission — a nearly impossible feat, as Israel overwhelmingly denies any Palestinian building requests in Area C.

Just 24 hours before the demolition, Maswadeh and his lawyer were allegedly told by the Israeli Civil Administration office in Beit El that the permits were approved, and the clinic would not be destroyed.

“We thought everything was fine, and we were really relieved,” Maswadeh told Mondoweiss. “So when we woke up in the morning to find the building destroyed, we were shocked,” he said.

According to Maswadeh, Israeli authorities notified his lawyer of the demolition via email in the evening hours of Monday, after his lawyer had closed his office for the day.

Maswadeh described the actions of the Israeli military and civil administration as “shady,” saying that it was “inhuman” to demolish a COVID-19 clinic in the midst of the pandemic.

“My family donated our land, and put in hundreds of thousands of shekels of our own money to build this clinic,” Maswadeh said, adding that he was driven to start the project after his grandfather passed away due to COVID-19 complications.

“This was our way of honoring my grandfather’s memory and helping our community,” he said. “But Israel does not care about that, and they clearly don’t care about Palestinians dying because of the coronavirus.”

Yumna Patel is the Palestine correspondent for Mondoweiss.