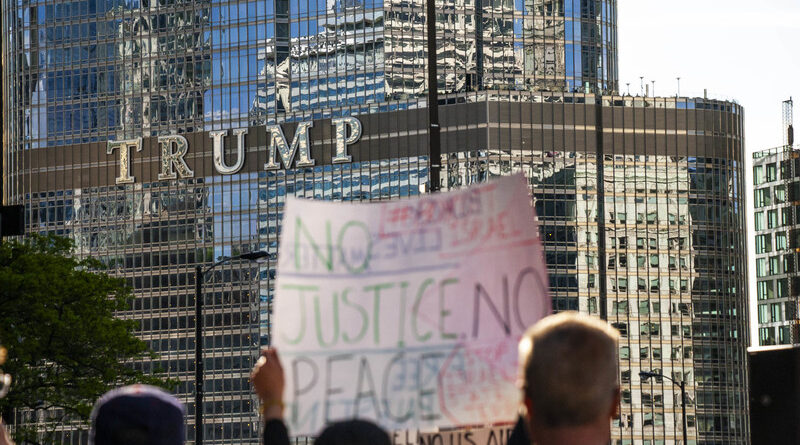 On 21 January 2016, the JUF board was given a confidential report profiling dozens of organizations, including faith and community groups and media that have expressed support for Palestinian rights or criticized Israel’s abuses.

The Electronic Intifada and Mondoweiss – two leading publications focused on Palestine – are listed among what the report calls “Tier One” organizations.

These are the ones the report deems to be among “the most impactful groups.”

The Electronic Intifada is described as “a potent Chicago-based web and social media platform” that with millions of readers “brings much attention to any Chicago issue it highlights.”

Other “Tier One” groups include American Muslims for Palestine, Students for Justice in Palestine, Palestine Legal, the US Palestinian Community Network and Jewish Voice for Peace.

The latter is described as “everyone’s favorite.”

“Anti-Zionist American Jewish groups have long existed,” the minutes state, but “none have achieved the sustainability or visibility of JVP.”

As reported previously, the JUF president in 2015 referred to members of Jewish Voice for Peace as “so-called Jews.”

Peace and justice groups that are well-respected in the Chicago area and nationally are also included in the report. Among them are the American Friends Service Committee, the Arab-Jewish Partnership, CODEPINK and an array of Muslim, Christian and Jewish organizations.

Jay Tcath, the JUF executive vice president who presented the report, described its findings as “upsetting,” but reassured the board that “all is not lost,” according to the organization’s official minutes obtained by The Electronic Intifada.

The minutes are attached below this article.

Steven Nasatir, the JUF president at the time, described the report as “depressing.”

The minutes indicate that a written document and a Powerpoint presentation of the report’s findings were given to board members. The minutes contain a six-page summary of the report as presented to the board by Tcath.

According to the minutes, the report is based on research from public sources such as tax filings and websites, but also “JUF’s files.”

The report identifies 44 groups, 192 board members and 178 staff, the minutes state.

The JUF minutes record Tcath explaining that “all the information was obtained in legal, open ways,” but that the JUF classified the report as confidential “because of the ways those within our community have misused information in the past.”

The minutes also refer to a database where the JUF collects information about “anti-Israel” events or campaigns.

This is all especially troubling given that the JUF boasts of its close relationships with the Chicago police, the FBI and the US Department of Homeland Security.

The Israel lobby group also works to foster partnerships between US law enforcement agencies and the Israeli military occupation forces that rule Palestinians.

It calls to mind how the Anti-Defamation League, another Israel lobby group, spied on Palestine solidarity and left-wing activists in the 1980s. The ADL files were handed over to the apartheid government of South Africa.

More recently, Al Jazeera’s undercover documentary The Lobby–USA revealed how several US Israel lobby groups have been monitoring the political activities and opinions of Americans, especially college students and professors, in secret collusion with the Israeli government.

Hatem Abudayyeh, a Chicago organizer who is affiliated with two groups named in the JUF report, told The Electronic Intifada he was concerned that the JUF “keeps a database of Palestinian and Palestine support organizations in Chicago and beyond, and describes these institutions, individuals who represent them and their work with racist tropes.”

“But this is not surprising at all, considering that the JUF has historically spewed Zionist propaganda, been apologists for Israeli crimes and supported military attacks on Palestinians and Arabs in our homeland, as well as racist, political attacks on Palestine-support organizing in the US,” Abudayyeh added.

“Jihadist terrorism and its association among many with Arabs and Muslims” is among the “challenges” the JUF report says Palestinians face in building more support.

In other words, the JUF may hope that stereotypes, smears and guilt by association could help limit support for Palestinians.

Abudayyeh noted that the JUF itself has in recent years funneled nearly $800,000 dollars into hate groups that stoke anti-Muslim prejudice.

The JUF did not respond to The Electronic Intifada’s inquiries about the report, including the nature of the files it keeps, whether they have been shared with any other organizations or governments, and the prior misuse of information acknowledged by Tcath.

“Although the anti-Israel side is more active than ever, we’re still winning,” the minutes record Tcath stating.

These include organizing a slew of votes in Chicago-area universities in support of BDS – the boycott, divestment and sanctions movement for Palestinian rights.

There have also been many high-profile rallies and billboard campaigns.

The JUF laments that the Palestine solidarity movement has “co-opted Protestant churches” – an apparent reference to the growing support for Palestinian human rights in Christian faith communities.

According to the minutes, the report also credits the Chicago-area groups with “moving the ‘pro-Palestinian’ position from the two-state solution to the one-state solution” and “forging alliances” with immigrant, social justice, environmental, feminist, LGBTQ and Black Lives Matter organizations.

Many Israel lobby groups see the rise of this kind of intersectional organizing as a major threat because it indicates that support for Palestinian rights is becoming mainstream.

Meanwhile, Israel is increasingly seen as inherently racist and aligned with the Trump administration and the far right.

In response, some lobby groups have tried to co-opt the Black Lives Matter movement.

A section in the minutes’ summary of the report points to “trends to watch and worry about.”

It includes: “American Jewish and Arab/Muslim demographics and passions (our numbers are decreasing while theirs are increasing.”

This indicates that the JUF’s approach to the Chicago community carries remarkable echoes of the racist view frequently expressed in Israel that Palestinians – merely by being born and existing – represent a “demographic threat.”

Nonetheless, the JUF report gives credit to a younger generation of Arab and Muslim activists.

“This cohort is more sophisticated and integrated into America, allowing their message to become more relevant and impactful,” the minutes state.

It also points to a key weakness for Israel: “We should acknowledge that part of the success of our pro-Israel agenda was due to it not being robustly contested.”

That is clearly no longer the case.

Abudayyeh, who is the national coordinator for the US Palestinian Community Network, picked up on JUF vice president Tcath’s claim that pro-Israel forces are “still winning.”

“Nothing could be further from the truth,” Abudayyeh said.

“The reason why JUF and other Zionist organizations in the US are spending so much money and time attacking Palestinians and our supporters is because the exact opposite is true.”

“Israel is finally being seen – even in the US – as the criminal, racist, apartheid state that it is, and that is because our organizing and activism is paying dividends,” Abudayyeh added.