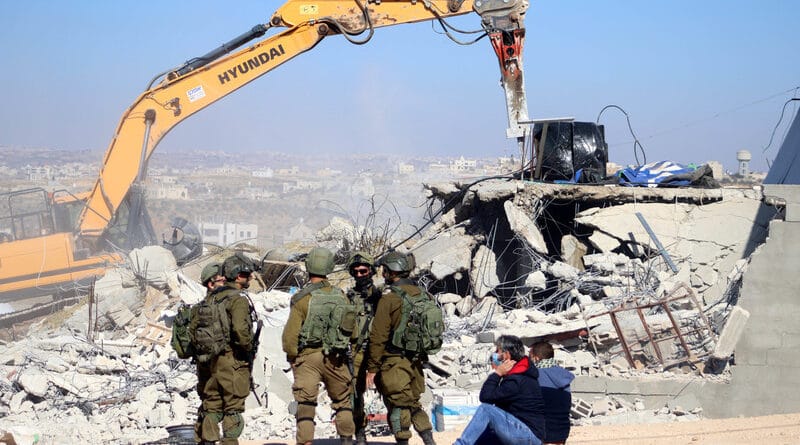 January 5, 2021—While people around the world were told to stay home due to the pandemic, Israel made more Palestinians homeless in 2020 than it has in years.

Israel demolished and confiscated more than 850 Palestinian structures throughout the year, displacing 1,000 people. More than half of those displaced were children.

The number of demolitions last year was also the highest annual total since United Nations monitoring group OCHA began keeping records in 2009—with the exception of 2016.

These figures do not include some 5,000 Palestinians whose livelihood was affected by demolitions and seizures throughout the year without being displaced.

In 2020, the number of Palestinians who had to demolish their own homes in occupied East Jerusalem under Israeli orders also increased. Palestinians are coerced to do this to avoid having to pay for Israeli wrecking crews.

The vast majority of demolitions and seizures took place in occupied East Jerusalem and Area C, the 60 percent of the occupied West Bank that remains under complete Israeli military rule.

Most of Area C was supposed to be gradually transferred to Palestinian Authority control following the signing of the Oslo accords in the 1990s. But that never happened.

Israel controls all planning and construction in the area under an openly discriminatory regime.

Palestinians are subjected to Israeli military orders that regulate every aspect of their lives, while Israeli settlers living in Jewish-only colonies built illegally in occupied territory are subject to Israeli civil law.

“Palestinians are allowed to build in less than one percent of Area C and in only about 15 percent of East Jerusalem,” OCHA recently stated.

This forces Palestinians to build on their own land without Israeli permits and live in constant fear that Israeli occupation forces may seize or destroy their property.

“This system works primarily to demolish structures,” Israeli human rights group B’Tselem stated, and is part of Israel’s long-term efforts to change the demographics in the area and ensure a Jewish majority in preparation for annexation.

Palestinians are also denied access to basic infrastructure, such as water and electricity, in those areas. Many rely on donor-funded solar panels for electricity and water storage.

But even donated structures are not safe from Israeli destruction.

In 2020, Israel demolished or confiscated about $350,000 worth of donor-funded structures, many provided by the European Union.

Apart from muted statements and photo opportunities at sites threatened with demolition, the EU has done nothing to hold Israel accountable for destroying tens of millions of dollars of projects funded by European taxpayers over the years.

In November alone, Israeli forces demolished and confiscated more Palestinian structures in a single month on record since 2009, according to OCHA.

November also witnessed the largest single demolition in occupied territory in years, when Israel leveled most of the occupied West Bank community of Khirbet Humsa.

Israeli forces arrived in Khirbet Humsa on 3 November and demolished 76 structures. More than 70 Palestinians were made homeless, including 41 children—totaling 11 families.

Minnesota Congresswoman Ilhan Omar called the demolition “a grave crime” at the time and asserted that “the United States of America should not be bankrolling ethnic cleansing.”

This a grave crime—in direct violation of international law. If they used any US equipment it also violates US law.

An entire community is now homeless and will likely experience lifelong trauma.

The United States of America should not be bankrolling ethnic cleansing. Anywhere. https://t.co/cdJgqS6Nwe

In the first week of 2021, Israel has already demolished 12 structures and displaced three Palestinians.