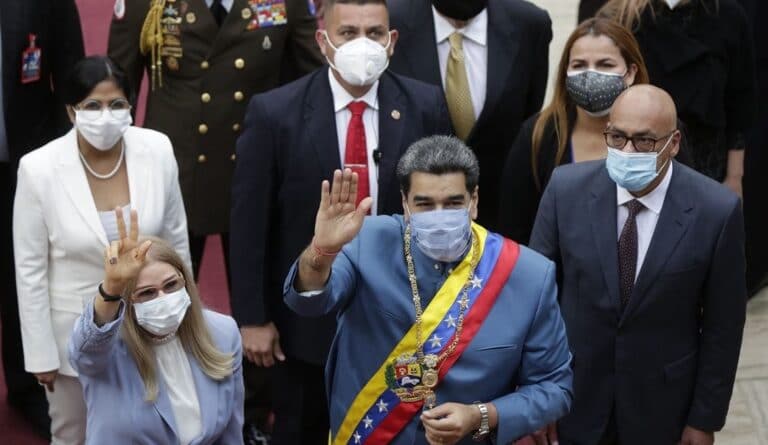 The President of the Republic, Nicolás Maduro, arrived on Tuesday at the Venezuelan National Assembly (AN) to address the customary annual message to the nation, and he also delivered the annual report for 2020 before the plenary session of the AN.

Hundreds of people were stationed outside the parliament to receive the head of state, who was complying with Article 237 of the Constitution of the Bolivarian Republic of Venezuela. This stipulates that in the first 10 days following inauguration of the AN, the president will personally present a message to parliament concerning his management over the previous year. President Maduro entered the chamber accompanied by a special honorary commission appointed by the president of the AN, Jorge Rodríguez, to accompany him to the floor.

Jorge Rodríguez, president of the National Assembly, welcomed the head of state, who will address his annual message to the country, in order to fulfill the mandate established by the Constitution.

“Here we are again, as the Constitution mandates. I have come again to fulfill the sacred commitment of our Magna Carta. This is what the Constitution mandates, that accounts be rendered to the country, today before this new National Assembly elected by popular vote on December 6. We have returned,” said President Maduro in reference to the landslide majority reached by the ruling party.

President Maduro stressed that “thanks to the elections of December 6, 2020, it will be recorded in history as the year that politics prevailed over the war, and nothing more and nothing less was preserved than the very existence of the Republic (…) Peace triumphed, the Constitution was imposed and we must say with great pride: Venezuela won!”