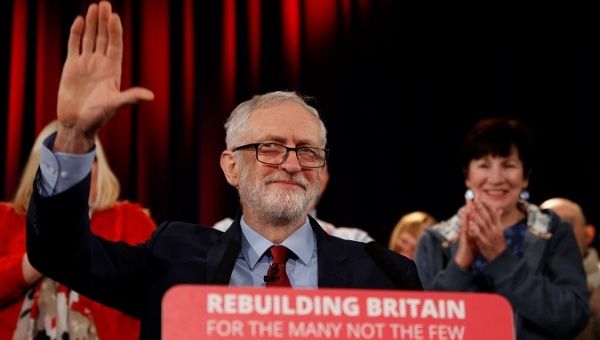 “The future of Venezuela is a matter for Venezuelans.”

U.K.’s Labour Party leader Jeremy Corbyn said Friday that intervention in Venezuela and calling for all sanctions against the government of Nicolas Maduro were “wrong” and that only Venezuelans have the right to decide their own destiny.

“The future of Venezuela is a matter for Venezuelans. U.K.’s Foreign Secretary Jeremy Hunt’s call for more sanctions on Venezuela is wrong,” Corbyn said in a tweet he posted Friday, his first reaction to the political situation in Venezuela.

“We oppose outside interference in Venezuela, whether from the US or anywhere else. There needs to be dialogue and a negotiated settlement to overcome the crisis.”

Over the years, Corbyn has positioned himself as an advocate of non-intervention approach to foreign policy, and is known to be an anti-war activist since his early years in politics and social movements.

His comment comes as EU government are preparing to declare their recognition of opposition lawmaker Juan Guaido as “interim president” of Venezuela after he self-proclaimed himself as such on Jan. 23 in violation of the country’s constitution and laws.

EU diplomatic sources told Reuters that Instead of the bloc as a whole making a joint declaration, each of the 28 governments will come forward with their own position on whether to back Venezuela’s National Assembly head.

The United States was quick to recognize Guaido as “interim president” and Washington’s right-wing allies in the region followed suit in what the legitimate Venezuelan government of Maduro calls a parliamentary coup.