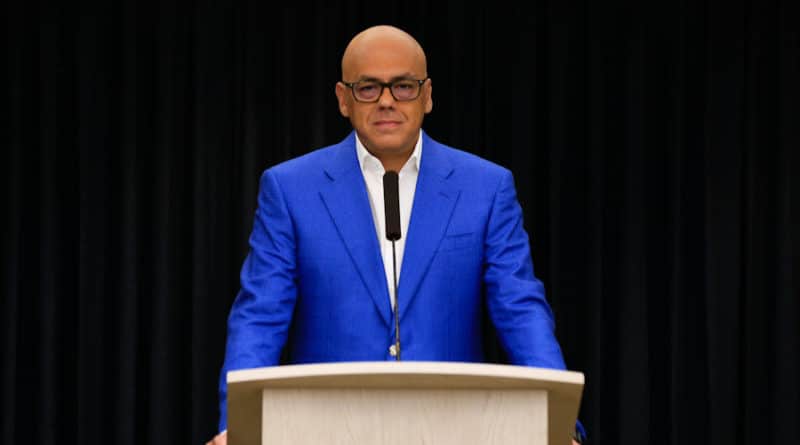 Venezuelan Vice President of Communication, Culture and Tourism, Jorge Rodríguez, announced that the circle of the opposition deputy Juan Guaidó hired Climaco Medina, alias “el Caracas” last Saturday, to point a revolver at the opposition deputy, with the purpose of generating fake news of an alleged attack during his visit to the city of Barquisimeto, Lara state, and thus blame the revolutionary forces.

During a press conference this Thursday, broadcast by Venezolana de Televisión, Rodríguez said: “Alias el Caracas was hired by people from Guaidó to fire and thus mount the false positive.” The Guaidó team positioned itself precisely to capture photos that show the alleged attack, in order to disseminate them through national and international media.

RELATED CONTENT: Guaido Says Venezuelan Government Tried to Assassinate Him After Gunman Spotted at Opposition Rally – False Flag Operation According to Others

Rodriguez questioned the way in which the media gave coverage to the events and transmitted the version that there was an “attack”, without investigating and verifying the information, while urging them to publish the truth.

These are the three photos released by Juan Guaidó on Saturday. The captions in violet were placed by different people in social networks.

In that sense, he questioned that, in the images disseminated by Guaido’s team, “a masked gunman appears to be putting Juan Guaidó at risk, and the rest of the people around him were in absolute calm.” He said Medina has a criminal record for drug trafficking and illegal possession of firearms and theft.

The Minister of Communications also pointed out that the Associated Press (AP) news agency denied that the photos shown above, where a man pointing to Guaido is observed, were taken by photographers of that agency, and noted that it was provided by the team of the opposition leader, but besides that they circulated the images worldwide.

Rodríguez explained that the Guaidó team manufactured “the photo and then sent it to an international news agency (AP) to build the false flag operation. The AP agency says it was not present but obtained the photo without investigating (…) The AP does not even ask themselves how there is only one photo of an incident of this magnitude, Rodriguez wondered.

Rodriguez criticized that international media disseminated information that a white van – where Guaidó was supposedly traveling – received bullet impacts, when the self-proclaimed president was actually moving in another vehicle.

In that sense, he urged international media that echoed the false positive to “do a little research, but do it soon, because in the coming months we will see the publication of new false positives without correction. Publish the truth of the facts,” insisted the head of Communication and Information.

“I challenge all foreign media that attack Venezuela to retract the published lie on this occasion; it is clear that they hired a man to be able to get the photo and to deceive the agencies (and public opinion) again. I would like to see foreign agencies saying that the mystery of the Barquisimeto gunman was resolved,” he said.

Gunman identified and behind bars

On Wednesday night the vice president of the United Socialist Party of Venezuela (Psuv), Diosdado Cabello, made public the identity of the gunman who was hired by the opposition deputy Juan Guaidó, to point at him in the false positive staged on February 29 in the alleged attack in Barquisimeto, Lara state.

The man was identified as Clímaco Edric Medina , aka “El Caracas”, who is now in the custody of the Bolivarian National Intelligence Service (Sebin). In a video the gunman claimed to have been contacted by a motorcyclist (a “motorizado”) nicknamed “Chicho”, who hired him to put the show together during the visit of Guaidó.

He revealed that for the false positive he was paid US$ 200 “to intimidate the protesters and point the gun at Guaidó. Once the work was finished, an additional US$ 200 would be paid.”

It is not the first time that Guaidó and his political followers set a similar trap, on January 5 of this year, he set up a show outside the Federal Legislative Palace, pretending that the military would not let him enter the elections of the [Assembly leadership] when in fact he lacked the necessary votes to be re-elected.