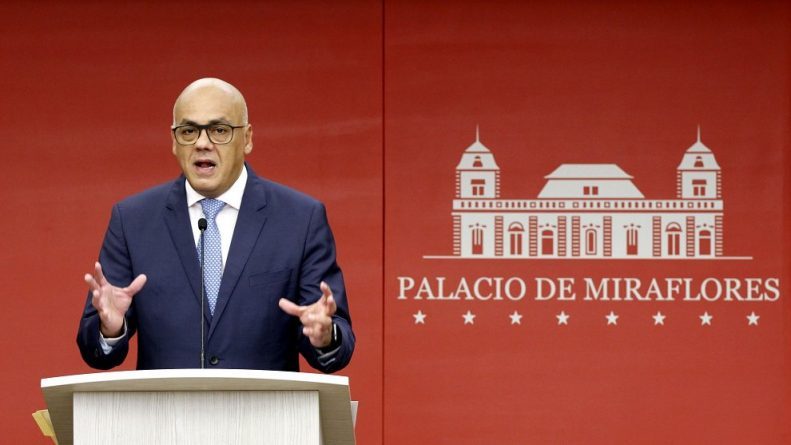 The Minister for Communication and Information, Jorge Rodríguez, offered details on Monday about the alleged corruption plot that revolves around opposition leaders, who diverted funds granted to undertake humanitarian aid in Venezuela processed in Colombian territory, where leader of the Voluntad Popular Party would be involved – he said – among them the president of the Popular Assembly, Juan Guaidó, and his former chief of staff, Roberto Marrero.

“The corruption plot of the Popular Will terrorist group that is already being noted on the extreme right wing outlets (…) was of great magnitude … There was no intention of taking humanitarian aid anywhere,” said the high-ranked official on a VTV broadcast.

Rodriguez also stated that they have all the messages and recordings that attest to these allegations.

Through audios made public by the Minister of Communication, it is evident how Almagro and Guaidó plotted “the corrupt acts of embezzlement propitiated from Colombia,” said the sectoral vice president.

During the press conference at the Miraflores Palace, Rodríguez recalled the denunciation made by the Maduro’s Administration on March 23, when he alerted the world about the network of corruption against Venezuela promoted from Cúcuta, Colombia, coordinated mainly by the deputy in contempt, Juan Guaidó.

The investigation shows Guaidó’s conversations with Rosana Barrero and Kevin Rojas, both militants of Voluntad Popular, who managed to steal resources of the Venezuelan people to finance the entry of assassins from El Salvador, Honduras and Colombia to perpetrate terrorist acts in Venezuela.

“The modus operandi of Juan Guaidó is to steal the resources of any Venezuelan company abroad, in complicity with the governments of Colombia, the United States and Argentina; when they get any kind of resources that belong to Venezuela they create false NGOs, so that later that money is transferred to personal accounts of opposition leaders,” he said.

In this regard, Rodriguez noted that 800 million dollars belonging to the company Citgo , a subsidiary of the Venezuelan state oil company Pdvsa, are being transferred to accounts of people Guaidó trusts. “The opposition has no political interest in Venezuela, so a situation of division exists between the parties of Voluntad Popular and Primero Justicia; the gigantic plot of corruption promoted by sectors of the opposition is evident,” said Rodríguez.