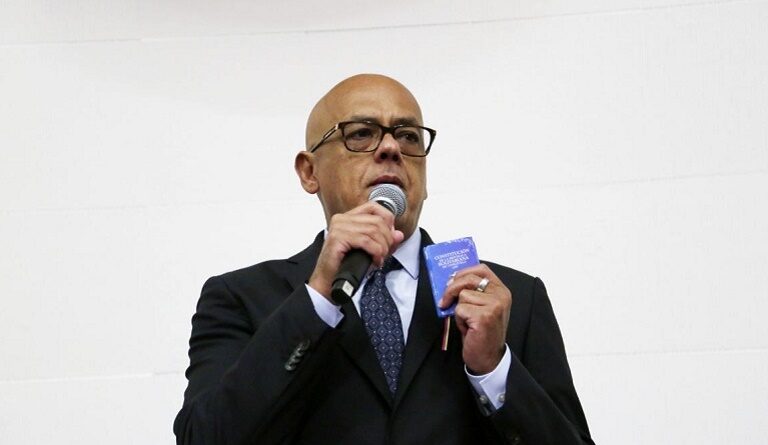 This Thursday, the president of the National Assembly (AN), Jorge Rodríguez, confronted what he considered a campaign directed at the division of Chavista forces promoted by members of the Communist Party of Venezuela (PCV).

During the discussions of an Agreement for the commemoration of the 29th Anniversary of the Bolivarian Military Patriot Youth Rebellion [led by Hugo Chavez in 1992], the president of Venezuela’s parliament questioned what he described as double talk by communist deputy Óscar Figuera, who during his turn to speak attacked the current administration of the President of the Republic, Nicolás Maduro.

“Elliott Abrams said that there were leftist militants that they must pay attention to, who agree that Maduro should leave, that Chávez was one thing but Nicolás Maduro is another,” said Rodríguez. “It is not a political discussion, it is an intention, it is a fifth column, it is a wedge and they’re not going to come to me at this point for blackmail, with the communist logo or with an acronym, because too much is at stake.” Rodriguez called attention to the attitude of the “special envoy” for regime change in Venezuela, Elliott Abrams, who claimed he was in talks with sectors of the left that were working for the departure of President Maduro.

RELATED CONTENT: Venezuelan Communist Party (PCV): We don’t Have to Join Either PSUV or Opposition Faction when Debating in the National Assembly

In the video below you can see the whole debate, uploaded by Venezuelan influencer Luigino Bracci (in Spanish):

“It’s an orchestrated campaign to generate division within the Bolivarian forces, and at this point either they’re with the homeland or they’re against the homeland, either you are with life or you are against life. We understand and assume that there are deputies from different opposition parties who indicate that they don’t agree with the Agreement [for the commemoration], but what we are going to confront is that they put on different clothing to disguise that they’re now attacking us,” he said.

Rodríguez defended the Agreement that was approved by the majority of the deputies belonging to the Bloque de la Patria bench, and stressed that he’ll continue to confront those who promote division of the revolutionary forces.

For his part Oscar Figuera, the only deputy from the Communist Party in the National Assembly, in the middle of his speech stressed that he voted in favor of the first part of the Agreement, however, he considered that the second part of it was completely false. “In efect, we’re going to vote for the Agreement, because as the Agreement says, on February 4 a path was opened for the national liberation of our country and to open our perspective to a different society, the socialist society, which we have not achieved yet,” he said.

“We will abstain for the second part of the Agreement, because the second part says that something is being done that’s not being done, according to our perception, and rather it should say that we are committed to rectifying,” said Figuera.