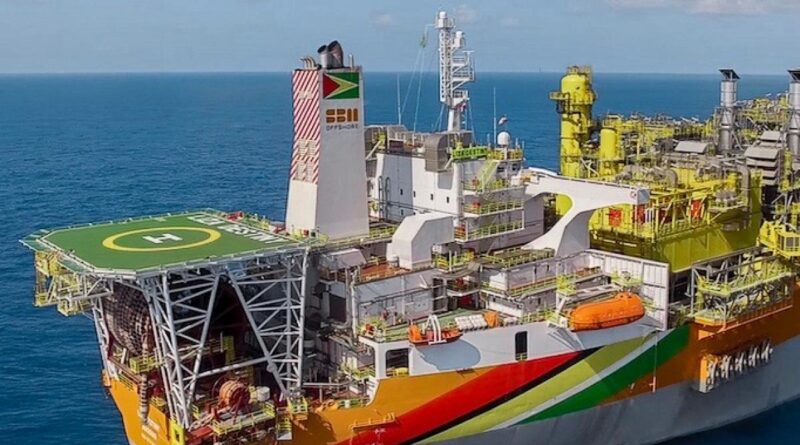 Vijay Prashad explores what is behind the fueling the border dispute between Guyana and Venezuela: oil and imperialism

Tensions rise between neighboring Guyana and Venezuela over a piece of land that has been disputed since at least 1835. Both Guyana’s President Irfaan Ali and Venezuela’s President Nicolás Maduro have exchanged sharp words about the status of the Essequibo region, which both countries claim. Since 1990, the two countries have pursued their claims through a United Nations “good offices” process; as recently as 2013, President Maduro and Guyana’s then-President Donald Ramotar said that the discussions over Essequibo were “going well” under this UN framework.

Everything changed in 2015, and since then the tensions between the two countries have flared up. Matters became so grave that the UN transferred the dispute mechanism from its “good offices” to the International Court of Justice, which ruled in December 2020 that it has jurisdiction over the case.

It’s All About Oil

Things changed in 2015 because of oil.

ExxonMobil, one of the world’s largest oil companies (newly merged in 1998), signed an agreement with the government of Guyana in 1999 to develop the Stabroek block, which is off the coast of the disputed Essequibo region. Over the course of the following decade, despite the dispute, ExxonMobil began to prospect in the area. It is important to recall that in 2007, the Venezuelan government ejected ExxonMobil from Venezuela’s Orinoco Basin oil fields because the US multinational corporation refused to comply with the new Venezuelan laws. ExxonMobil turned its attention toward Guyana and—in particular—to the disputed Essequibo region. As a consequence of the aggressive prospecting of oil companies (ExxonMobil, but also the Canadian firm CGX), Guyana faced renewed border disputes not only with Venezuela but also with Suriname, Guyana’s neighbor to the east.

In 2015, ExxonMobil announced that it had found 295 feet of “high-quality oil-bearing sandstone reservoirs”; this is one of the largest oil finds in recent years. A close reading of the Production Sharing Agreement (PSA) between Guyana’s government led by then-President David Granger and ExxonMobil should shock any sensitive person. ExxonMobil was given 75 percent of the oil revenue toward cost recovery, with the rest shared 50-50 with Guyana; the oil company, in turn, is exempt from any taxes. Article 32 (“Stability of Agreement”) says that the government “shall not amend, modify, rescind, terminate, declare invalid or unenforceable, require renegotiation of, compel replacement or substitution, or otherwise seek to avoid, alter, or limit this Agreement” without the consent of ExxonMobil. This agreement traps all future Guyanese governments in an inexcusable deal that has been made on disputed waters.

Having studied the contract, Dr. Jan Mangal—a former presidential adviser to President Granger and a consultant for the Danish company NTD Offshore—said that this deal was one of the worst that he had ever seen. Guyana, Mangal argued, is being “re-colonized,” by which he meant that the deal would “make a few local business people and politicians rich from oil so they will work for the exploiters and so they will not work for their country folk.” Even the International Monetary Fund weighed in with a report that said Guyana signed a very bad deal with ExxonMobil; the terms of the contract, the IMF wrote in a report for the Guyanese government, “are relatively favorable to investors by international standards” with royalty rates for Guyana “well below of what is observed internationally.”

When the Romans went out to conquer the Mediterranean world, they did so by the policy of divide et impera, divide the adversaries and then rule over them. The operations of ExxonMobil, with the help of the US government, clearly show them egging on the conflict between Guyana and Venezuela over the Essequibo region so that ExxonMobil benefits in the chaos.

There is mischief in this conflict. After Venezuela declared its independence in 1811, the British colonizers in what they called British Guiana wanted to ensure that their stronghold would not be weakened. In 1835, Robert Hermann Schomburgk surveyed the edges of the British territory and drew a line that claimed the Essequibo and Orinoco river basins for his imperial masters; Venezuela disputed the so-called “Schomburgk Line” in 1840. When gold was discovered in the Cuyuni basin, plainly in Venezuelan territory, the line was shifted to claim that entire region. An arbitration treaty signed in the United States was bathed in controversy, with Venezuela rejecting it (according to Betty Jane Kissler in her 1972 study on the Venezuela-Guyana boundary dispute: 1899-1966). US President Grover Cleveland watched these developments and then noted that the Schomburgk Line had been “largely extended in some mysterious way” and is treated as “so infallible, and so sacred” that they will not accept anything other than full annexation; “The trader,” wrote President Cleveland of the British motivation, “is again in evidence.”

The trader returned to the story with ExxonMobil.

Guyana’s government used money from ExxonMobil “to meet the estimated cost in 2018 of presenting Guyana/Venezuela controversy at the International Court of Justice including payment of legal fees.” In mid-2020, the Guyanese paper Kaieteur News’ senior reporter Kiana Wilburg broke the story that the World Bank had paid $1.2 million to Hunton Andrews Kurth, a law firm long associated with ExxonMobil, to revise Guyana’s petroleum laws. Wilburg’s report quoted the former presidential adviser Dr. Jan Mangal, who said that the government was “letting the very companies we need to regulate dictate the country’s business. This is a recipe for failure. And as you can see, we are failing.”

Before attention could be brought to the sweetheart deal given to ExxonMobil, and the opportunity for ExxonMobil’s lawyers to write Guyana’s laws, then-US Secretary of State Mike Pompeo arrived in Guyana in September 2020. He was on a three-day tour of Venezuela’s neighbors—Guyana, Brazil, and Colombia—to accelerate the US hybrid war against Venezuela. It was an odd situation. The CIA had overthrown Guyana’s democratically elected government of President Cheddi Jagan in 1964. More than half a century later, the US was trying to use Guyana as an instrument of regime change against Venezuela. That is why the Guyana Human Rights Association asked President Ali to “avoid any recklessness.” Pompeo’s quid pro quo on the table was that if Guyana joined the crusade against Venezuela and tightened its embrace of ExxonMobil, then the US would support its claims to Essequibo.

A columnist for Kaieteur News wrote a sharp commentary after Pompeo left the country. “Here we are, caught in the middle, between Exxon and Venezuela and we have nothing to show for it. We Guyanese don’t even know the full details regarding oil deals conducted on our behalf, by our political leaders with Exxon… We talk about oil and the man comes and talks about terrorism and drugs and the sea—the things that matter to America. He protects his own, delivers to his own,” the columnist wrote. “Once again, Guyanese got nothing.”

The conflict on the Guyanese-Venezuelan border heats up. ExxonMobil sits on the sidelines, smiling. The distraction suits the oil giants. They make their money whether there is peace or war.