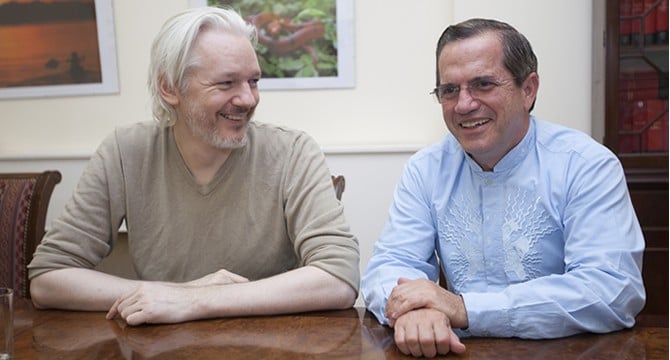 In mid-January, I went to London England to research what is happening with Julian Assange. We could not visit him. He is in Belmarsh Maximum Security prison and even his lawyers could only see him for two hours over the entire previous month. This despite the fact he is facing extradition to the USA and possible life imprisonment.

On Saturday, January 19, we took the London metro to the end of the line, and then walked a couple miles to Belmarsh prison. We joined the dedicated supporters who demonstrate in support of Assange every Saturday. On special occasions, there is a major event with hundreds or thousands of participants. But every Saturday, rain or shine, there is an action supporting Assange during the afternoon in front of Belmarsh Prison and in the evening in Trafalgar Square in downtown London.

The dedicated supporters of Assange are strikingly international and Latin American. The organizer of the Belmarsh action was Cristina, a Brazilian woman who has lived in England for 20 years. The person with the megaphone was Clara, who left Chile after the 1973 Pinochet coup. With a Chilean accent, she explained to passersby, “Julian Assange is one of the greatest journalists of our day. He must be freed. Julian, we love you!” Elise, originally from Colombia, was yet another Assange supporter. We met other impressive individuals who are dedicating part of their lives to supporting Julian Assange. There was Larry from Australia. Six months ago Larry arrived in England to do anything he could to support Julian. There is Reiko, a young woman of Japanese descent. After Julian was taken to Belmarsh Prison his supporters set up a tent camp on the avenue in front of the prison. Supporters stayed there round the clock until the tents and bicycles were confiscated by authorities.

Progressive leaders of Latin America are also supporting Julian Assange. The former president of Ecuador, Rafael Correa, took the brave and bold step of granting Julian Assange asylum in the Ecuador Embassy. That was his safe haven from arrest for seven long years. Correa even granted Julian Ecuador citizenship in an attempt to block the US from seizing him.

Unfortunately, the next Ecuador government succumbed to US bullying and bribery. Suddenly there were “problems” with Julian staying in the Embassy. While huge protests against the unpopular Lenín Moreno government took place in Ecuador, the Ecuador embassy in London made life increasingly difficult for Assange. They allowed a private contractor, paid by the US, to spy on him 7 days a week, 24 hours a day, including during meetings with his attorneys. In April 2019, the Ecuadoran government revoked Julian Assange’s Ecuadorian citizenship and asylum and allowed British police to seize him. He is now imprisoned at Belmarsh Maximum security prison pending an extradition hearing.

In addition to Rafael Correa, numerous other Latin American leaders have spoken out for Julian Assange. Former Brazilian President Ignácio Lula da Silva criticized the arrest of Julian Assange as “an attacked on freedom of expression.”

Evo Morales, former president of Bolivia, has said, “We strongly condemn the detention of Julian Assange and the violation of freedom of speech. Our solidarity is with this brother who is persecuted by the US government for bringing to light its human rights violations, murders of civilians and diplomatic espionage.”

Mexican President Lopez Obrador has called for Assange to be released, noting that Wikileaks has “demonstrated how the world system functions in its authoritarian nature.”

The support for Assange is well placed. He and the Wikileaks team have exposed US meddling, manipulations and worse in Latin America. As Julian Assange explained in his introduction to the book The Wikileaks Files, “Perhaps no region in the world demonstrates the full spectrum of the US imperial interference as vividly as Latin America.”

Chapters of the book synthesize important findings in the nearly 2.5 million US State Department records and cables. As Assange says, “The cables demonstrate a smooth continuity between the brutal US policy in Latin America during the Cold War and the more sophisticated plays at toppling governments that have taken place in recent years…the use of USAID and ‘civil society’…pursuing ‘regime change’ in El Salvador, Nicaragua, Bolivia, Ecuador, and Haiti.” The cables reveal the intensity of US intervention against Venezuela and that the State Department over-ruled the conclusion of their embassy in the 2009 Honduras coup. The embassy was explicit that the overthrow and kidnapping of President Zelaya was a coup, but this was downplayed in Washington.

The cables confirm corporate influence in US foreign policy. For example, the US Embassy in Quito sought to prevent Ecuador from developing its own pharmaceutical industry to replace expensive US drugs.

Julian Assange is an Australian journalist whose “crime” is that he led a group which broadcast information that US authorities did not want revealed. Secretary of State and former CIA Director Mike Pompeo has called Wikileaks a “hostile non-state intelligence agency bent on the destruction of the United States.” That is not true. US policies do not have to be based on intervention, aggression, violations of international law and hypocrisy. In fact, most US citizens, as well as Latin Americans, are hurt by these policies.

In Argentina, former president and current Vice President Cristina Kirchner has said, “In the upside-down world, false news circulates freely and those who reveal the truth are persecuted and imprisoned.”

It is crucial for press freedom that Julian Assange be freed and NOT extradited to the US.