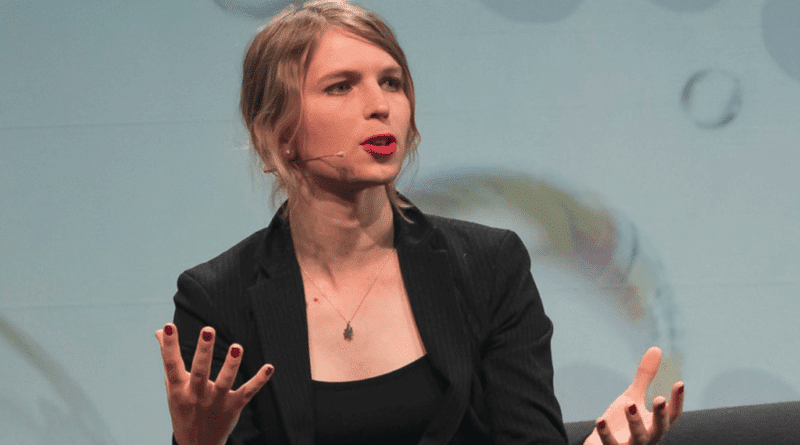 Months before trial in 2013, United States Army whistleblower Chelsea Manning read a statement in military court, where she outlined her role in disclosing over a half million documents to WikiLeaks. She described her motivations for releasing each set of information and meticulously informed the court about how she downloaded, prepared, and electronically made the disclosures.

The defense for WikiLeaks founder Julian Assange heavily relied on this statement during the second day of a week-long extradition hearing in London. What unfolded showed how crucial her grand jury resistance is to the ability of Assange to defend himself in court.

A contrived theory forms the basis of the U.S. government’s entire case against Assange. Prosecutors maintain Manning worked for Assange as some kind of insider or spy that WikiLeaks turned against the U.S. government and recruited to steal documents. But that theory sharply conflicts with the timeline in Manning’s statement.

It is one of the main reasons why the government has abused the grand jury process. Prosecutors hoped they could break her and force her to provide testimony that could be used to impeach herself or show the statement she made was unreliable.

James Lewis is the lead prosecutor pursuing the extradition of Assange from the United Kingdom on the U.S. government’s behalf. He said Manning’s statement to the military court was a “self-serving statement.”

He insisted the statement was indicative of someone, who has consistently tried to help out Assange.

The expressed frustration was a reaction to a thorough argument that included what the defense said are examples of “Zakrzewski abuse.”

Essentially, if prosecutors rely upon factually incorrect descriptions of alleged offenses to make their case, that constitutes an abuse of process and may be reason to stay the request for an extradition.

At one point, Sommers described Manning’s statement as the “best place to look for a chronology.”

WikiLeaks promoted a collaborative list in 2009 that was a kind of wish list compiled by journalists, human rights groups, lawyers, historians, and activists, called the “Most Wanted Leaks.” This is the centerpiece for the U.S. government’s claims that Assange “solicited” Manning.

The superseding indictment [PDF] against Assange specifically alleges, “Between in or around January 2010 and May 2010, consistent with WikiLeaks’s ‘Most Wanted Leaks’ solicitation of bulk databases and military and intelligence categories. Manning downloaded four nearly complete databases from departments and agencies of the United States.”

It further states, “The United States had classified many of these records up to the SECRET level pursuant to Executive Order No. 13526 or its predecessor orders. Manning nevertheless provided the documents to WikiLeaks, so that WikiLeaks could publicly disclose them on its website.”

As Sommers showed, the notion that Manning saw the list and then uploaded diplomatic cables from the State Department’s Net-Centric Diplomacy database is “absolute fantasy.” The “Most Wanted Leaks” list requested “bulk databases,” but this was not one of them on the list.

The statement to the military court shows Manning knew about the detainee assessment briefs and had access to the files. In early March 2010, Manning, who was deployed in Baghdad, became concerned that the federal police might turn over opponents of Iraqi Nouri al-Maliki to the U.S. government for transfer to Joint Task Force Guantanamo. This is when she took an interest in the Guantanamo files.

Notably, the “Most Wanted Leaks” list requested rules of engagement for Iraq from 2007, and Manning disclosed this file, along with the rules of engagement for Iraq from 2006. But she only provided this document because it was important context for “Collateral Murder,” the video of a 2007 Apache helicopter attack in Baghdad that WikiLeaks published.

Manning also did not provide rules of engagement files from Afghanistan, although she had access to them.

The “Most Wanted Leaks List” did not include the databases of military incident reports from Iraq and Afghanistan. Yet, she disclosed these databases to WikiLeaks.

Sommers contended there is no evidence Manning ever saw the “Most Wanted Leaks” list.

During Manning’s trial, David Coombs, her defense attorney, disputed whether Manning had ever seen a draft of the “Most Wanted Leaks” list. Manning never mentioned the list in her statement to the court.

“Pfc. Manning had access to a lot of information,” Coombs contended. “And had [she] wanted to, and this was [her] list, you would see a lot of searches on Intelink that match up verbatim or very closely to the items requested on the list.” [Intelink is a U.S. intelligence network of top secret, secret, and unclassified databases.]

There was no evidence at all that Manning ever saw the list, Sommers plainly stated.

Astonishingly, Lewis responded to this argument from the defense by suggesting the details in the indictment about the “Most Wanted Leaks” list are merely a “general allegation.” It is not supposed to link up with any databases or disclosures.

The prosecution links it to the “different disclosures. That’s not how it’s put in the request,” Lewis declared.

All because these specific allegations about Manning’s disclosures to WikiLeaks appear in the “general allegations” part of the indictment, the prosecution would have everyone believe they aren’t tying specific disclosures to the list. It is preposterous and renders the word “general” entirely meaningless.

But the superseding indictment contains absolutely nothing to suggest the prosecution of Assange rests upon Manning’s browsing the WikiLeaks website. None of the allegations related to “solicitation” that involve the WikiLeaks website have anything to do with other pages. Everything relies on a “Most Wanted Leaks” list conspiracy theory that is easy to disprove.