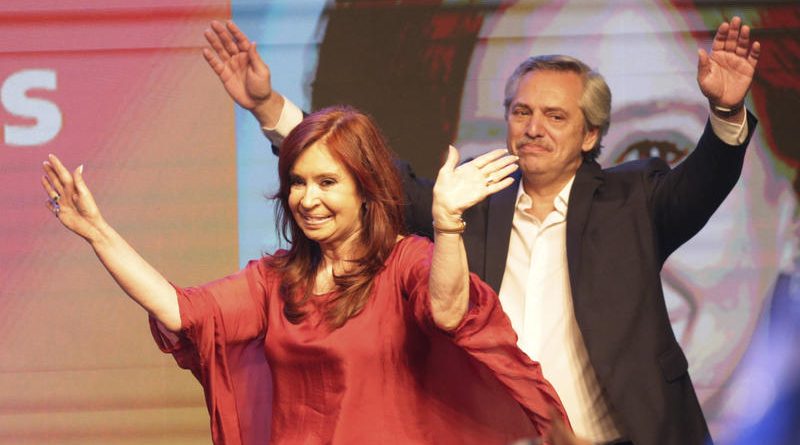 In a political environment of unrest and protests from progressive sectors against neoliberal policies in Chile and Ecuador, great expectations have been focused on two Latin American countries that had presidential elections on 27 October: Uruguay and Argentina. We are seeing a tendency towards a rebirth of the Pink Tide in the region.

With almost 100% of the votes counted there is no clear winner in Uruguay. Daniel Martinez of the governing leftist Frente Amplio coalition took a considerable 40.7% of the votes and Luis Lacalle Pou of the conservative Partido Nacional took 29.7%. According to electoral law a winner is declared with a 50% plus one of the votes or a 10% margin over the second candidate. They will go to a run-off election on 24 November.

Martinez is a socialist activists and if he becomes president he will follow in the political footsteps of current president Tabaré Vázquez who has a good popular appeal and is considered politically progressive. Domestically he has been able to maintain a strong coalition and internationally he has established good regional relationship including Cuba and Venezuela.

Lacalle is pro-business and promised austerity measures during his campaign. His electoral success will depend largely on how much support he will get from the other smaller parties. Both candidates will put a lot of effort in garnering that support in the next few weeks.

On the other hand Argentina has a new president assuming office on 10 December replacing right-wing Mauricio Macri who has conceded to Alberto Fernandez.

Argentinian voters have clearly voted against the neoliberal policies of Macri and have chosen Alberto Fernandez and his vice-president Cristina Fernandez de Kirchner (CFK) with 48% of the votes. Only 45% was needed to avoid a runoff vote in November. Last August the Fernandez team had already been chosen in the primary to run as Macri’s opponent.

Voters’ decision was mostly around economic issues. The ballot was a rejection of Macri’s neoliberal model that has imposed an austerity program that has been in place for the last four years. Under that model Argentina has been on the verge of an economic recession while it’s dealing with a reported $50 to $100 billion debt, which has been a contributing factor to a 50% inflation rate, and increased unemployment and poverty levels (35 out of every 100 Argentinians are estimated to have been drawn into poverty).

Alberto Fernandez came to front stage in politics when last 18 May CFK, who was expected to launch her candidacy, surprisingly announced that Alberto Fernandez would be the presidential candidate for the Frente de Todos (Front for All) party while she would be the vice-president in his government. The Front for All party is a progressive coalition of unions and social movements. The party is politically aligned with Peronism named after the ideology of former president Juan Domingo Peron based on social justice, economic independence and political sovereignty.

Alberto Fernandez has politically conservative roots himself. However, he was able to work with supporters of Peronism by rejecting IMF imposed austerity measures, and eventually he became chief of staff in the Nestor Kirchner administration (2003-2007). When, Nestor Kirchner’s wife, Cristina Fernandez, in turn became president, Alberto Fernandez became critical of her administration but his criticism was considered to be healthy self-criticism and not in contradiction with the overall progressive political stance.

Given CFK’s popularity in Argentina she may be considered the driving force behind the electoral success of 27 October. Her presidency (2007-2015) was not void of controversy. Some of her most controversial policies such as increased taxation for agricultural exports and a fiscal austerity program did not go through in the face of popular opposition. But she can also be credited for her policies to reduce poverty such as universal child allowance program for parents in precarious economic situation. A UNICEF report attributed a reduction of extreme poverty by 30.8% and general poverty by 5.6% thanks to the program.

The main reason CFK is considered a progressive president and part of the “Pink Tide” in the region is largely due to her foreign policy. She has put Argentina’s sovereignty above the IMF demands and she has consistently fully aligned herself with progressive leaders like Lula and Dilma Rousseff, Evo Morales who was congratulated on his recent presidential victory in Bolivia, Chavez and Maduro, and Rafael Correa.

Therefore, it appears that CFK has a proven track record unlike Fernandez but it is evident that the two were brought politically closer in their opposition to the neoliberal policies of Mauricio Macri. However, their once different political positions must call to reflection about their future administration as a team. For the time being we have to believe that their common goal will work for a cohesive center-left administration. After 10 December we may start seeing how strongly they will abide to their progressive reputation.

The regional sentiment for a continued strong relationship with Argentina and rekindling of Latin America progressive movement is fully expressed in the congratulatory statement of the government of Venezuela that says in part, “It is a triumph that expresses the hope of the Argentine people to walk the path to rescue social justice, economic independence and political sovereignty in their country. The massive electoral participation reinforces the legitimacy of the election process and sends a clear message from the Argentine people in rejection of the imposition of the criminal economic neoliberal policies of the International Monetary Fund, imposed without mercy in recent years by the authorities in office.” It also expresses the desire to “strengthen the integration mechanisms of Latin America and the Caribbean” as an indirect reference to Macri’s rejection of that integration.