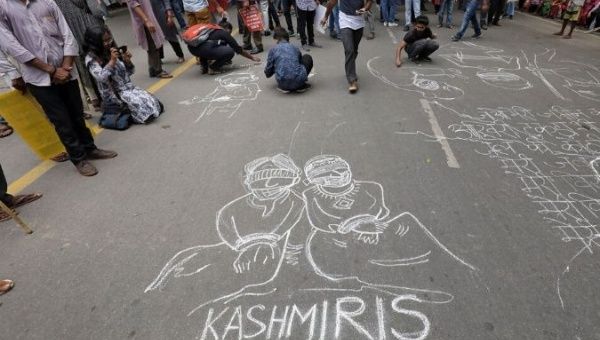 According to Twitter’s transparency reports, more accounts were withheld in India in the second half of 2018 than in the rest of the world combined.

Nearly one million tweets criticizing India’s government or denouncing the current situation in occupied Kashmir have been removed since 2017 by Twitter, according to a study published Friday by the Committee to Protect Journalists (CPJ).

The CPJ analysis reveals that the tweets blocked in India since August 2017, under the company’s country withheld content policy, were shared by accounts that focus on Kashmir. Almost 100 of those accounts were also made inaccessible to locals in the last two years.

“It totally makes sense the Indian government would go after Twitter and Twitter users, because Twitter as a platform is a really significant source of information sharing, for journalists and activists and regular citizens in Kashmir,” the U.N. Special Rapporteur for Freedom of Opinion and Expression David Kaye told CPJ.

According to Twitter’s transparency reports, more accounts were withheld in India in the second half of 2018 than in the rest of the world combined.

Withheld content is blocked for users whose country setting or other information places them in the relevant jurisdiction, according to Twitter’s policy, which can apply to tweets or accounts.

Kashmir-based human rights activist Khurram Parvez told Al Jazeera that Twitter’s suspension of Kashmiri accounts was in sync with the temperament of the government in Kashmir, which frequently orders the shutdown of the internet. As well as the detainment of journalists and closing down of media outlets critical of India’s far-right Prime Minister Narendra Modi.

A case presented by the CPJ is that of the magazine Kashmir Narrator, which in mid-2018 published a story on a Kashmiri militant who fought against Indian rule. By Aug. 10 the Indian government informed Twitter that the account was allegedly breaking Indian law.

By the end of the month, Indian police arrested Aasif Sultan, the journalist who wrote the piece and Twitter withheld the magazine’s account in India, blocking local access to more than 5,000 tweets. As of October 2019, Sultan was still in prison, facing terrorism-related charges and the account is still inaccessible in the territory.

RELATED CONTENT: Pakistan Denies India’s Modi Use of its Airspace as Kashmir Issue Heats Up

Twitter has bowed to the Indian government and has agreed to censor accounts sharing news and information from Indian-occupied #Jammu and #Kashmir, @pressfreedom says https://t.co/ZOFrQ5UKFA

The region is observing an indefinite shutdown since Aug. 5 as the government has deployed additional troops numbering in tens of thousands in the troubled region to implement Section 144, which does not allow more than four persons to assemble.

The ruling over occupied Kashmir will now allow Indian Hindus to purchase properties in Jammu and Kashmir, which activists say warned would be a similar policy to that of Israeli settlements in Palestine.

Along with revoking the special status, the government divided the state in two Union Territories, meaning they will be ruled by the federal government while losing statehood.

Access to postpaid mobile phones was only restored on Oct. 14 and the internet remains cut off for the Muslim-majority area’s more than seven million people. While hundreds of local politicians, lawyers, and activists still remain in detention.

On Tuesday the United Nations High Commission for Human Rights said that it was “extremely concerned” at the situation, urging “the Indian authorities to unlock the situation and fully restore the rights that are currently being denied.”

Featured image: People draw and write messages on a road during a protest against the scrapping of the special constitutional status for Kashmir by the government, in New Delhi, India, August 7, 2019. | Photo: Reuters