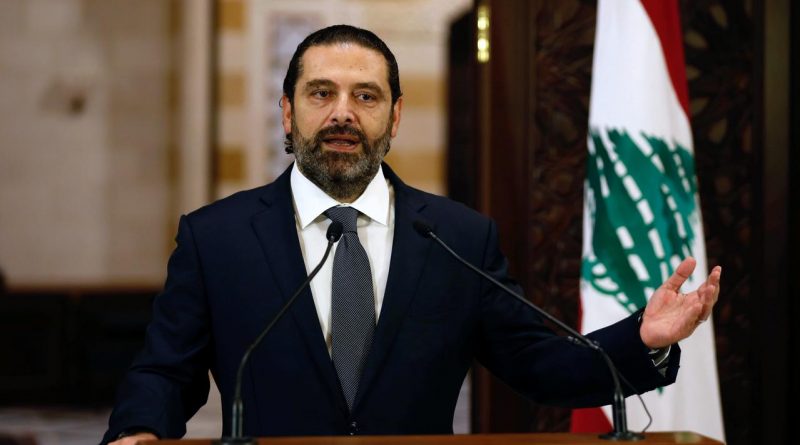 Embattled Lebanese Prime Minister Saad Hariri has submitted his resignation as people remain on the streets across Lebanon for the thirteenth day of anti-government demonstrations against the country’s economic crisis.

“I have reached a dead end today. I will head to the Baabda Palace to submit the government’s resignation to President Michel Aoun,” Hariri said as he addressed the Lebanese nation in a televised speech on Tuesday evening.

“Posts are not important; what’s important is the country’s dignity and safety,” he added, calling upon people from all strata of the Lebanese society to preserve the stability and security of the country.

Hariri highlighted that he wants to make a “positive shock,” saying, “No one is bigger than his country.”

He also told Lebanese political parties that “It is our responsibility to protect Lebanon.

Under the constitution, Hariri’s cabinet would stay on in a caretaker capacity until a new government is formed.

The protests first began on October 17, hitting Lebanon at a time of worsening financial crisis — banks were closed for a 10th day on Tuesday along with schools and businesses.

Earlier in the day, Lebanese Parliament Speaker Nabih Berri said the resignation of the incumbent government led by Hariri would not solve the deep social and economic crisis in the country, and would further complicate the situation.

“Changing the government’s components does not solve the crisis, but complicates it further, and will diminish the possibility of forming a new one in the foreseeable future, which opens the country to an unknown fate,” the senior Lebanese lawmaker pointed out.

Meanwhile, clashes have erupted between local residents of Beirut’s Ring Area and a group of vigilantes over the closure of streets in the neighborhood.

“Protesters must stage their sit-ins outside the houses of politicians and officials instead of paralyzing the movement of citizens,” the locals argued.

Observers and political pundits view Hariri’s resignation as a stinging blow to his pro-West and pro-Saudi Future Movement. They also state that the move would throw a monkey wrench into Saudi attempts to advance its agenda in Lebanon.

In November 2017, Hariri stunned Lebanon and the world by announcing his resignation in a live television broadcast from Saudi Arabia. He accused Iran and the Lebanese Hezbollah resistance movement of sowing strife in the Arab world – an allegation strongly rejected by both sides.

Senior sources close to Hariri and top Lebanese officials said Riyadh had coerced the Lebanese premier into stepping down and put him under house arrest.

Aoun stressed at the time that the prime minister was being detained in Saudi Arabia against his will. Sayyed Hassan Nasrallah, Hezbollah’s secretary general, also noted that Saudi authorities had clearly and openly declared a war on Lebanon by holding Hariri hostage and forcing him to quit.

Hariri finally managed to get out of the kingdom amid international pressure on the Riyadh regime. He rescinded his resignation after returning home.

Moreover, President of the Progressive Socialist Party, Walid Jumblatt, appealed for calm and called on all Lebanese political parties and faction to engage in national talks in the wake of Hariri’s resignation.

“I do not know what circumstances Hariri is currently in, but if he rescinds his resignation, we are with him. Those coming to governance should well know the crisis in Lebanon and avoid an economic disaster,” he told Lebanon’s Arabic-language al-Mayadeen television news network.

Hariri: God willing, we will get out of this impasse

“God willing, we will get out of this impasse. I am relieved to have offered something to the Lebanese people,” Hariri said in his first remarks after his resignation.

Berri, for his part, said, “What is happening requires immediate calm and dialogue among Lebanese government components.”

Also, France on Tuesday called on Lebanese authorities to guarantee stability and national unity in the country after Hariri stepped down as the country’s prime minister.

“Lebanese Prime Minister Hariri has just resigned a few moments ago, which makes the crisis even worse in a way,” French Foreign Minister Jean-Yves Le Drian told the National Assembly.

“Will politicians and political authorities decide to build Lebanon together? Will they put the collective interest of the country ahead of their own? That is the question posed by Prime Minister Hariri’s resignation,” he added.

“We of course are also aware of this information, and we presume, according to the information that we have, that this resignation is a reaction to the continuing protests of the recent weeks,” Maas said on Tuesday.

He added, “We now have to wait and see if this resignation actually takes place as at the moment it has just been announced, or rather offered. At the end of the day, we have, for many years, had the experience that the composition of the Lebanese government plays a decisive role in the stability of Lebanon and will continue to do so in the future, so we hope that a possible resignation will not further undermine the country’s stability.”

“We hope possible future protests will be peaceful. It is of vital importance that the stability of Beirut is not threatened any more. We don’t need a political vacuum, and we certainly don’t need one now and so we are following these developments closely and will provide any assistance we can to maintaining stability,” the top German diplomat pointed out.

Separately, governor of the central bank of Lebanon, officially known as Banque du Liban, has dismissed reports that Lebanon’s economy will collapse in a matter of days in the wake of anti-government protests.

The senior Lebanese monetary figure underlined that a “solution” to the crisis is needed within days in order to restore confidence and avoid a collapse.

Iran calls for unity in Lebanon after Hariri’s resignation

Iran has also stressed the need for unity and solidarity among all Lebanese factions, political figures and religious sects following the move by Prime Minister al-Hariri.

“We hope the Lebanese nation and government would successfully get through this serious and sensitive juncture by means of rapport,” Spokesperson for the Iranian Foreign Ministry Seyyed Abbas Mousavi said late on Tuesday.

He then underlined the significance of safeguarding the stability in Lebanon.

“The Islamic Republic of Iran emphasizes the need for solidarity, unity and rapport among all Lebanese clans, parties and figures in order to maintain the country’s stability and security, and to respond to the legitimate demands of Lebanese people in a calm atmosphere,” Mousavi noted.

Growth in Lebanon has plummeted in the wake of endless political deadlocks and an economic crisis in recent years.

The country hosts 1.5 million Syrian refugees, and their presence is often blamed for putting pressure on the already struggling economy.

Unemployment stands at more than 20 percent, according to official figures.

The Lebanese Finance Ministry says the national debt is hovering around $85 billion, which accounts for more than 150 percent of the gross domestic product (GDP).

Successive governments have failed to address a waste management crisis or improve the electricity grid, which is plagued by daily power cuts.