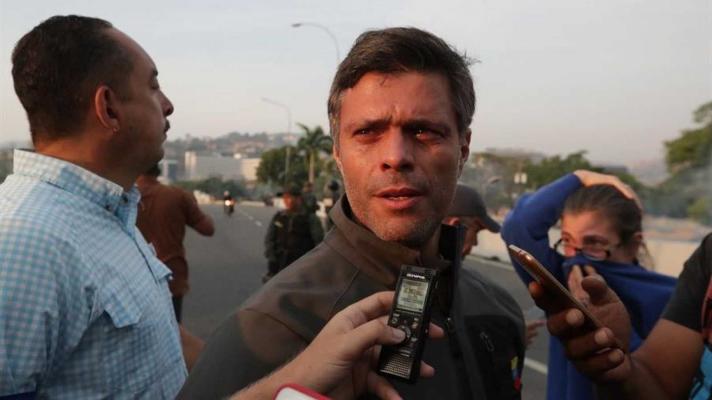 Leopoldo López is the main protagonist of the extremist opposition plot in Venezuela, transforming the party he founded, Voluntad Popular (VP) into a terrorist organization, engineering multiple anti-democratic offensives harmful to the essence of Venezuela.

Trained at Kennedy College, Harvard University, he was chosen by a certain interested sector of the United States establishment to engineer a hypothetical Venezuela kneeling at the feet of Washington.

This training center in the heart of the North American elite academy gathers and prepares the figures who will later organize and direct the institutions of global control behind neoliberal capitalism, institutions that shape the financial totalitarianism operating out of Wall Street, the military-industrial complex, and US oil firms. The directors of the World Bank, the International Monetary Fund, the UN, Goldman Sachs, the main law firms, the most important banks, the first oil companies, the arms industry, originate there.

His Voluntad Popular (VP) party, founded in 2011, is born out of the strategy outlined by López’s circle, sponsored by the National Endowment for Democracy (NED), an organization dependent on the US State Department (curiosity: López received NED’s Democracy Award in 2015). You could say that both López and VP are the offspring of US foreign policy.

His tenure as mayor of Chacao (2000-2008) supports the way of doing politics “the American Way.” Those advertising agencies called “independent media” sold us a young mayor who graduated from Harvard, and turned him into a presidential candidate who does “street activism” and is a leader in defense of democracy and citizen rights.

His call for La Salida in 2014, just months after the first election of Nicolás Maduro, gave rise to scenarios of organized swarming and escalating violence, which manifested anew, with greater force, with 2017’s guarimbas.

The model of violent color revolution had been drawn by the VP machinery, known for its terrorist record, for using the allowances of public power in favor of guarimba blockades and for institutional destabilization, with narco-paramilitary links, while its leaders cozy up to the American establishment.

During his time in prison attempts were even made to market him as a kind of “Venezuelan Mandela,” though it was never achieved in the media, with the exception of cartelized media who continue to exalt his immaculate persona.

Already forty-nine years old, he had been in hiding in the ambassador’s residence after the complete failure of an attempted military coup, led by himself and Guaidó in April 2019, against President Nicolás Maduro. He had been imprisoned in Ramo Verde Prison (in Miranda state), was under house arrest, and for the last six years was harbored in a foreign embassy.

His relevance in the media is only momentary, however he is a touchstone for the strategy of Guaidó, his main adviser and puppeteer.

López, apparently, enjoys the favor of a neoliberal and neoconservative sector of the US establishment, that perhaps does not considering him as presidential material for a hypothetical Venezuela without Chavismo in power. Trump, as far as is known, does not seem very personally interested in him (less in Guaidó).

It is possible that the “popular consultation” that VP called for (in recent weeks) was the idea of ​​López, as a way to continue attracting resources and media attention using the US script.

But it is no longer possible to prop up that house of cards for much longer. López’s flight, planned by the United States and Spain, constitutes a major symptom, and perhaps the cherry on top of the failure of the opposition agenda led by VP, so much so that there are also Venezuelan sectors in the United States that want to take the lead away from the Harvard boy.

That López’s situation—reunited with his privileged family in Madrid—mirrors the situation in which the Venezuelan opposition finds itself is not only the opinion of a large part of Chavismo and this publication, but also of others such as Raúl Gallegos, analyst with Control Risks consultants in Colombia: “It is probably the clearest sign that the continued effort of the opposition to overthrow Maduro has failed that a leader committed to staying in Venezuela like López has finally decided to leave.”

A deserved relief to his family and supporters. But that a committed stay-in-#Venezuela leader like Lopez finally opted to, and managed to leave is clearest sign that the opposition's effort to unseat Maduro is truly going nowhere. https://t.co/KAIUfoHLuI

In fact, it is very well-documented how López was framed in the “struggle for Venezuela from within Venezuela,” with his VP subordinate to various strategic entities in Washington (Carlos Vecchio) or in Latin America (Lester Toledo), but always controlling everything within Venezuela.

Another lie from Tintori that covered up the real ploy was to remove Leopoldo López from Venezuela and take him to Madrid, where he could have “another impact” from within the European Union. Arranged with the United States (the transit through Colombia was a no-brainer, taking into account that the country neighboring Venezuela is a platform for the relaunch of the Monroe Doctrine ).

His father Leopoldo López Gil is key to understanding the whole plot. Since his arrival in Madrid the government of Mariano Rajoy granted him Spanish nationality by letter of naturalization in December 2015, which was sufficient for the Spanish institution to incorporate him into the Popular Party (PP) as candidate number twelve on its list for the elections to the European Parliament in May 2019, occupying a vacancy within the PP list.

López Gil was elected deputy, with the party’s candidates obtaining twelve seats. Since then López Gil has been involved in the Human Rights Commission of the European Parliament, responsible for “issues” related to Venezuela, Nicaragua and Cuba.

It is very possible that López will also assume some role in the party nomenclature of the PP, at least in a covert way, with the PP being an organization connected with the most neoconservative of the American and European establishment: Jose Maria Aznar’s support for the invasion of Iraq is the most clear evidence.

Without a doubt, he will continue to command what Guaidó gets involved in (with a fake position included), and will have the resources to live with privilege and to conspire against Bolivarian Venezuela from abroad. But he will not have the definitive support of the opposition leadership who decided to stay in the country and participate in the political field, much less the support of those who resist the attacks of the blockade that he himself proposed, and that sees a Chavismo clearly victorious in the face of the debacle of the US regime-change operation.