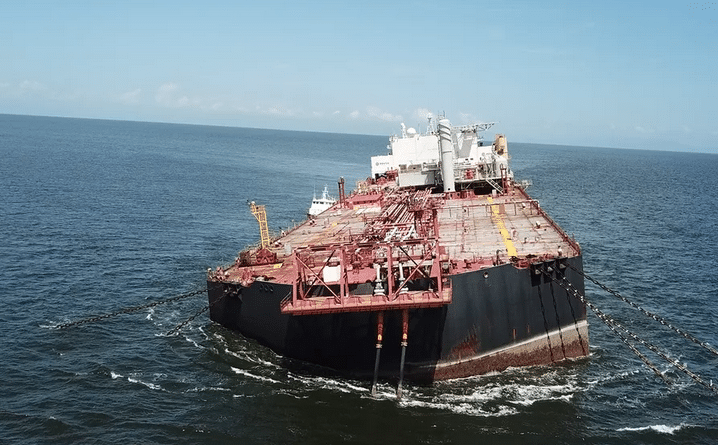 The Minister of Industry and Energy of Trinidad and Tobago, Franklin Khan, said this Friday, October 23, in a virtual press conference, that the team of experts from his country boarded the tanker, and that after conducting an inspection they found no signs of tilting that could lead to its collapse.

The team of experts sent by the Government of Trinidad and Tobago to examine the possible oil spill from the Nabarima, an offshore oil facility belonging to the PDVSA oil company stranded in the Gulf of Paria, on the border with Sucre state, found no imminent risk of sinking or fuel leak.

The Minister of Industry and Energy of Trinidad and Tobago, Franklin Khan, said this Friday, October 23, in a virtual press conference, that the team of experts from his country boarded the tanker with the approval and accompaniment of Venezuela. After conducting an inspection they found no signs of tilting that could lead to its collapse, as previously reported.

“I am very pleased, as is the government of Trinidad and Tobago, that the report of the technical team has given a relatively positive perspective of what is happening there,” the official said.

Khan said that the technical team’s report indicated that there is no risk of a spill, but that, nevertheless, the Port of Spain Executive will continue to be vigilant and in communication with the Venezuelan authorities to ensure that there are no risks.

“This is a matter that is under the jurisdiction of a sovereign state—Venezuela. We are a friendly neighbor and I think we have been treated with respect,” said Khan.

The Minister of Foreign Affairs and the Caribbean Community (CARICOM) of Trinidad and Tobago, Emery Browne, said before receiving the report that Port of Spain has been in communication with the Secretary General of CARICOM, Irwin la Rocque, and the Association of Caribbean States (AEC).

Khan said that the Venezuelans had been frank with the Port of Spain government, reporting in September on incidents that had occurred on the tanker. “In general, the team is very satisfied that the oil facility is not tilted. The tanker was not taking on water and all operating systems were working at an acceptable level,” Khan said, noting that in their report the experts had concluded that the Nabarima is not at imminent risk of tipping or sinking.

Khan said there are no leaks and that implies that the facility’s double hulls were intact and there is minimal risk of an oil spill at this time.

He said experts also confirmed that proper maintenance is underway and that pumps and motors are being repaired or replaced.

The Ministry of Industry and Energy noted that the team of experts also recommended that the government of Trinidad and Tobago request Caracas to allow technicians to revisit the tanker in about a month to ensure that everything remains safe.

Although the Nabarima problem dates back more than twenty months, to when the Venezuelan tanker was abandoned after the United States imposed illegal sanctions on Caracas, news interest grew weeks ago after regional media mentioned the danger of a potential spill.

Although the tanker was sailing under the Venezuelan flag, it was operated by Petrosucre, a joint company between PDVSA and the Italian oil company Eni.

Featured image: The FSO Nabarima on October 16, 2020. Courtesy of Fishermen and Friends of the Sea.