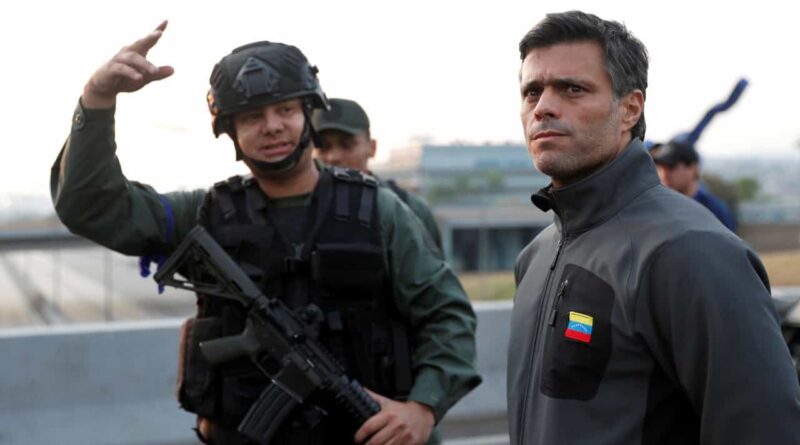 Venezuelan opposition leader Leopoldo López, who had been staying at the Spanish embassy since the failed coup he attempted in conjunction with Juan Guaidó in April 2019, fled Venezuela this Saturday, his father confirmed to international news agency AFP.

“He left the embassy of his own free will and left Venezuela in an obviously secret, clandestine way, through the border with Colombia, and has already left for Spain,” his father Leopoldo López Gil told AFP.

However, according to information released by international media, López would have left Venezuela by sea, and would presumably be in Aruba, en route to his final destination of Madrid, where he will meet his wife Lilian Tintori and their three children. At first, the news was given amid strong speculation that López had crossed the Colombian-Venezuelan border, and was on his way to Bogotá.

Leopoldo López had been at the Spanish embassy for about eighteen months after having violated his house arrest to participate in the April 30, 2019 failed coup attempt against the government of Nicolás Maduro. He was placed under house arrest after leading violent anti-government protests in 2014 which led the death of almost fifty Venezuelans in an operation he called La Salida (the exit).

What we know on Lopez fleeing:he said at nauseam that he never will leave Venezuela,he escape through Colombia on his way to Spain, Guaido says he planed everything 😂,but many believe Lopez is abandoning a sunk ship, Panampost says it was an agreement reach with President Maduro https://t.co/AZUKSmx7Lq

Thus, at the current time there are two conflicting versions about what country Lopez chose to make his way to Spain. According to AFP Lopez’s father said he escaped through Colombia, but many anti-Chavista media referred to his arrival, by boat, in the intermediate country Aruba. This information is relevant because Colombia is an open enemy of the Venezuelan government, whereas if Aruba allowed the illicit entrance of Leopoldo López it might create diplomatic friction with Caracas. For years López and his wife Lilian Tintori claimed that they would never leave Venezuela unless they got rid of the socialist government of Nicolas Maduro.

One fascist flees Venezuela and a truth revolutionary enters Venezuela…you tell us who is being defeated!!! https://t.co/vwEjKuGoyC

Juan Guaidó, for his part, tweeted “fleeing the repressive apparatus, we managed to take Leopoldo López… to international territory,” [emphasis added] leaving many Venezuelans, Chavistas and anti-Chavistas included, to mock Guaidó on Twitter, asserting that López fled and left him alone because he knew that their ship was sinking. Additionally the anti-Chavista media base in Miami, namely Panampost and Patricia Poleo, reported on an agreement between President Maduro’s government and Spain as the main cause behind Lopez’s escape.

Saturday afternoon AFT reported that Evo Morales visited Caracas, prompting many light-hearted comments noting that a fascist had fled Venezuela on the same day that a true revolutionary had entered. Many also ridiculed 2014’s La Salida, recalling ironically that the operation was planned to force President Maduro to leave Venezuela, but has instead resulted in the exit of Leopoldo López.