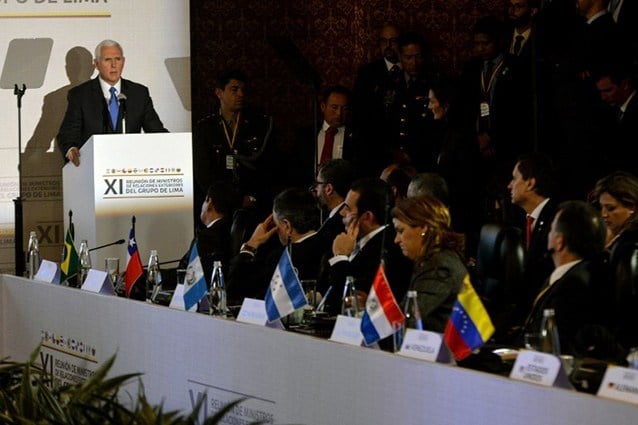 The Lima Group and US authorities work separately on different strategies to find a way out of the Venezuelan conflict and specify the exit of President Nicolás Maduro from power.

The mechanisms promote the internationalization of the sanctions imposed by the United States on Venezuela and to approach the countries that still support the government of the Venezuelan President, such as Cuba, Russia, Turkey and China.

RELATED CONTENT: Putin on Guaido’s Appeal to God: Time to Get Back to Reality (Video)

To this end, the Lima Group announced last Thursday that it issued an invitation to more than 100 countries to discuss next August 6, in Lima (Peru), the current situation of the Caribbean country. Among those nations are those allied to the Maduro government.

According to Peru’s chancellor, Néstor Popolizio, the idea is that all countries that have a connection with what is happening in Venezuela sit down for the first time to dialogue together, to find a way to make elections happen soon in that country.

At this meeting, the Lima Group will not invite any of the Chavista leaders or the Venezuelan opposition to avoid the polarization of the meeting. Neither will they issue a final document, out of respect for the conflicting positions that will be exposed in the debate.

The meeting also plans to discuss the impact of the migration of Venezuelan citizens in the region and other continents.

For his part, the US Senator for the Democratic Party, Bob Menéndez, announced that along with his parliamentary colleagues from Europe and other regions, he seeks to encourage other countries to adopt sanctions against Maduro that the government of Donald Trump has already imposed.

Among the steps he will take to promote this proposal is a visit he made Thursday to Cúcuta, a border city with Venezuela, to learn more about the details of the migration of citizens from the Caribbean country to Colombia.

Menéndez considers it essential that Russia, China and Turkey give up their continued support of Maduro, although these three countries have been clear in stating that they do not support the President but rather the legitimacy of his inauguration that was proclaimed on May 20 in a presidential elections that had the participation of more than six million Venezuelans.

However, the congressman appealed to the debts that the Venezuelan State maintains with these countries to try to persuade them.