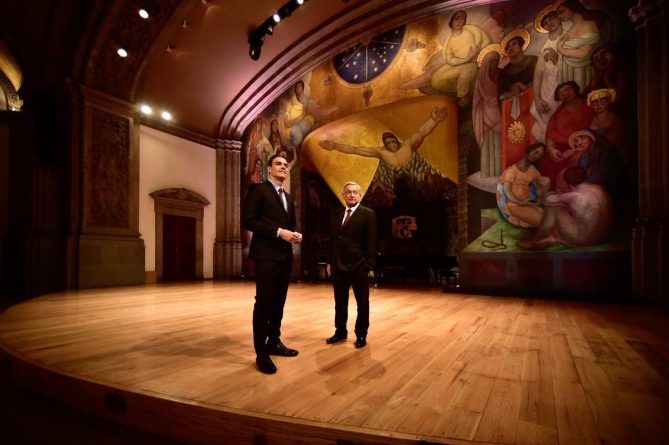 The president of Mexico, Andrés Manuel López Obrador (AMLO), offered on Wednesday to act as an intermediary of a dialogue between the Government and the opposition in Venezuela, in order to guarantee peace in the South American nation. This was said by the president in a joint speech with the President of the Government of Spain, Pedro Sanchez, during a visit to Mexico.

The Mexican President lectured his Spanish counterpart with a class of history and international law regarding the Venezuelan issue. You can enjoy that exchange in this twitt:

“We have coincidence with the Spanish Government in calling the dialogue to the parties. In this we agree and we would be able to participate, if requested, so that the two parties in conflict can sit down and talk, without conditions, “said López Obrador.

In the video referenced above the Mexican President took the opportunity to give a class of history to his spanish counterpart and referred to the French invasion in the XIX century when the conservatives went to Europe to defeat the legal government of Benito Juarez. He said that after 2 years of war Juarez government succeeded and launch this famous phrase: “Between individuals, as between nations, peace means respect for the rights of others.”

The Mexican head of state reiterated that “things can not be imposed”, so he first urged the parties to sit down to talk, since it represents “a good advance for understanding.”

“The Venezuelan people have to solve it. A dialogue, not confrontation. That is our position,” said AMLO.

For his part, Pedro Sanchez, confirmed that Spain defends the position of the European Union (EU), widely criticized from Venezuela, given its interventionist nature against the South American country. In his speech, Sanchez reiterated his intention of elections in Venezuela, ignoring the last elections in which the president Nicolás Maduro was imposed in May 2018, with more than 67 percent of the votes.

On the possibility of dialogue, the Venezuelan Government has demonstrated its willingness to accept the agenda of dialogue and mediation with the opposition, proposed by Mexico and Uruguay, “with an open agenda and without conditions.”