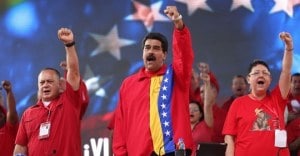 The expulsion came in response to the EU’s decision to impose entry bans and freeze the assets and accounts of 11 officials in the country. The blacklist now stands at 36 officials, accused of “crimes against democracy and the rule of law.” The measure also responds to the European bloc’s crude interference in Venezuela since 2013, since, although it pretends to promote dialogue, it acts as a pawn in US policy of punishing those who advocate a political-electoral solution, with elections organized in a mutually satisfactory manner, both for the government and for the opposition, which is attached to the democratic and institutional cause, as has been agreed in the Dialogue Table.

Maduro also announced that he was reviewing a corresponding diplomatic action with the Spanish ambassador, Jesús Silva, in whose residence, where the coup leader and terrorist Leopoldo López is sheltered, he planned for weeks the defeated Operation Gideón, according to an extensive article in the Wall Street Journal. As it will be recalled, the members of the plan tried to invade Venezuela by sea from Colombia in a new attempt to overthrow and assassinate Maduro.

Beyond that are the opposition parties of the so-called G4, the coup plotters by trade, lovers of invasions and blood, obedient to the line of the empire, enriched with the funds for subversion and the goods stolen from the Venezuela by the “sanctions”, although none more so than Guaidó, who has become a multimillionaire. Opposed to any negotiated solution, as former Spanish president José Luis Rodríguez Zapatero could attest, the patient facilitator and intermediary of the agreement that was to be signed in the Dominican Republic between the government and the opposition in February 2018, aborted by order of Washington, even though the latter came from Bogotá.

At the time, the former peninsular president said: “This is a decisive moment, this is the time, otherwise it is dangerous. That is why I call for understanding… the essential thing that there is agreement on the electoral date, observation, rules of the game, electoral guarantees”… an alternative to the agreement would be “extremely negative”.

In keeping with its adherence to Washington’s policy, in recent days the EU disqualified the new National Electoral Council (NEC), appointed by the Supreme Court of Justice using its constitutional powers, without valid arguments, due to a parliamentary omission, on the grounds that the National Assembly in contempt did not have the necessary votes and a part of it lacked the political will to appoint the new rectors of the entity. Days later, the EU announced the “sanctions” adopted against Venezuelan officials. Among them, Luis Parra, the opposition president of the National Assembly, and his two vice-presidents, members of the faction that displaced Juan Guaidó from the parliamentary leadership, after they were elected on Jan. 5 of this year when the then president of the body did not appear at the seat of sessions.

Guaidó did not go because he knew that the rebellion hatched against him by the opposition deputies of the regions made it impossible for him to gather the necessary votes to maintain his seat. Then, as is his custom, he set up a show outside the legislative building with a fake group of deputies to simulate an election, without complying with parliamentary regulations. So the only legitimate and democratically elected leadership of the National Assembly is the one presided over by Parra.

Given Guaidó’s lack of participation in the streets, his tense relations with other opposition leaders, the critical situation in his own party, from which he seems to be leaving, and his virtual disappearance from the political arena, it is very likely that Washington has pressured Brussels to pump oxygen into him by censoring the agreements of the Dialogue Table between the government and the opposition sector that will participate in the parliamentary elections at the end of the year and expresses its refusal to accept sanctions or foreign interference.

What sustains Guaidó today is Trump’s finger and the mendacious media hype that he is recognized by more than 50 countries. But the accelerated loss of prestige and leadership of the U.S. system in the world and its deep internal crisis is evident. Trump’s light and criminal execution in the face of the pandemic and the great multiracial mass movement that has been articulated around the assassination of George Floyd are symptoms of that crisis. The EU is not lagging behind. It was unable to implement a solidarity plan to confront the Covid-19 and something similar may happen to its economic recovery plan, perhaps suffocated by new sanctions from its US “ally”.