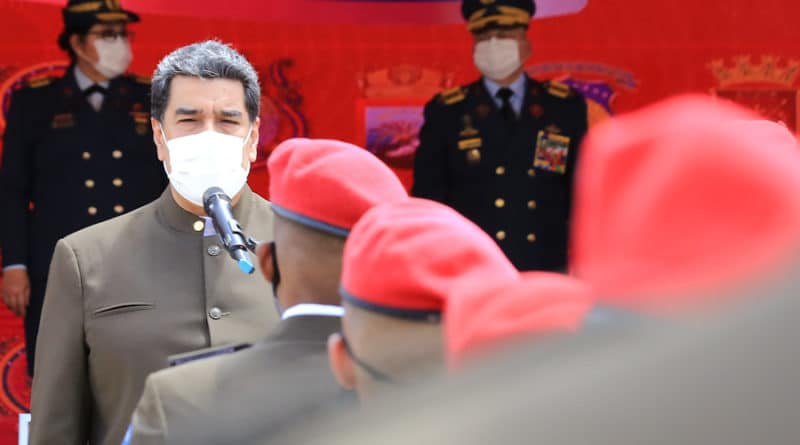 At a military event the Venezuelan head of state, Nicolás Maduro, explained the reasons why the expulsion was suspended. “Foreign Minister Jorge Arreaza informed me on Tuesday of a telephone conversation with the High Representative, Josep Borrell, and that in that conversation, which was tense, hard at the beginning, where we made a solid claim about the illegality and injustice of those intended sanctions, the idea arose to take the path of resuming political and diplomatic dialogue between the EU and the Venezuelan government, raise the level of dialogue, deepen and streamline direct dialogue between Josep Borrell and Jorge Arreaza, and a request was made to suspend the expulsion of the EU ambassador.”

“Once the Chancellor briefed me, I said to Chancellor Arreaza: Let me think about it. I think the idea is good — as John Lenon said — to give dialogue, diplomacy, communication and a new understanding with the EU a chance.” He asked Arreaza to inform Borrell that, “as president of the Bolivarian republic of Venezuela, I have decided to suspend the expulsion of the EU ambassador to Caracas, to draw up a joint statement between the two ministries, as has been done, and to proceed to a new dialogue stage between High Representative Josep Borrell and Foreign Minister Jorge Arreaza. That is what has been done. It seems to me that it is the best, the most intelligent, the appropriate and also, what corresponds to what we seek: Let the world hear the truth of Venezuela! Let the EU enter into another understanding and that there be a deep, historical rectification of the role that the EU has played in its relationship with Venezuela!”

He asked for all the support of Venezuelan public opinion for this agreement, “and the applause of our people for these steps of peace diplomacy.”

In this regard, Foreign Minister Jorge Arreaza, in an interview with the Telesur channel, reported that he was able to “exchange opinions very frankly” with Borrell. “We expressed to him the annoyance of the Venezuelan people and the Bolivarian government of Venezuela at the permanent insistence on meddling in Venezuela’s internal affairs and issuing these alleged sanctions, which have no basis in international law.”

He stressed that dialogue and the commitment to take it to the highest level, in “permanent and constant communications” between Borrell and Arreaza, “to keep communication in real time to avoid misunderstandings,” so that “they always have the version of the State, of the Bolivarian government of Venezuela” in order to “correct any type of noise in the relations.”

“So, it was agreed to publish the joint statement, which is expected to have a positive effect.” The decision regarding the expulsion, according to the Vienna Diplomatic Convention, of the European representative in Venezuela is suspended, as a gesture of the Bolivarian government so as not to hinder dialogue with the European Union.”

“We hope that there will also be gestures from Europe, to have a much more objective position on the events in our country.”

Suspend sanctions on Venezuelans
When asked if the sanctions that the European Union announced against Venezuelan personalities would be suspended, Arreaza indicated that “they discussed this matter. Now, the EU’s decision-making mechanisms are very complex. The High Representative does not impose any decision of his own will, but he responds to the Council of Ministers of the European Union. Of the 27 (countries). So they are in discussions and debates that must be opened in the European Union, but Venezuela hopes that there will be some kind of gesture that goes with what we have done, and that allows us to improve the relationship.”

He recalled that there is a [domestic] community of more than 2 million people among Spanish, Portuguese, Italians and their descendants, so he hopes there will be rectification.

Communique
Below the full official translation of the communique:

Consequently, the Venezuelan Government decided to rescind the decision taken on June 29th, 2020, by which Ambassador Isabel Brilhante Pedrosa, Head of the European Union Delegation in Caracas, was declared persona non grata.

Both agreed to promote diplomatic contacts between the Parties at the highest level, within the framework of honest cooperation and respect for International Law.