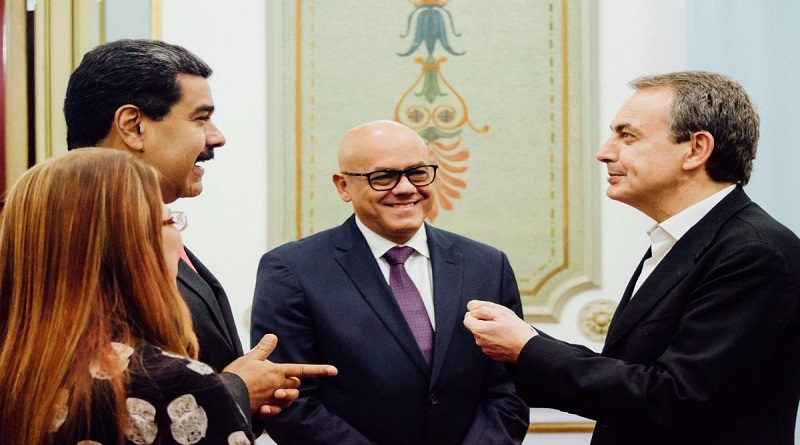 This Friday, the president of the republic, Nicolás Maduro, met with the former president of the government of Spain, José Luis Rodríguez Zapatero, to update him on the advances of the National Dialogue and address actions to be taken.

In Office. No. 1 of the presidential palace, the head of state received the renowned international personality, who in 2016 participated as a mediator between the opposition and Bolivarian government sectors during the negotiating tables that were established at that time at the express request of the Venezuelan government.

Two years after the call to national dialogue by President Maduro, Zapatero will offer an account of this process to peacefully settle the different positions among the national government and an opposition that opposes the so-called US sanctions and the complicity of [another opposition] group submissive to the interests of the Trump administration.

Rodriguez Zapatero is scheduled to meet with the National Dialogue table and with Venezuelan opposition sectors.

Zapatero stressed that this table has a calendar and some commitments. In this regard, he expressed his confidence that “it can be at least heard and, of course, respected by everyone.”

He took the opportunity to warn that the unilateral coercive measures of the United States against Venezuela, have only made things worse in the Caribbean country, and do not give “results.” In that sense, he said he wishes that Washington and the US president, Donald Trump, “was aware that the de facto path, that the way of sanctions, the only thing that has been produced is that things are worse economically.”

The former president of the government of Spain during his visit to New York, in September last year, to participate in acts of the Alliance of Civilizations of the United Nations Organization (UN), expressed his support for the National Dialogue Table in Venezuela.

On that occasion, he expressed his confidence that this effort – shaped to guarantee peace in the country – can be heard and, of course, “respected by the whole world,” while the US continues to intensify its policies against the country.

In the meeting, held at the Miraflores Palace, in Caracas, the “first fighter” (first lady), Cilia Flores, was present; the vice president of the Republic, Delcy Rodríguez and the vice president of Communication, Culture and Tourism, Jorge Rodríguez, who currently heads the government delegation at the National Dialogue Table with the opposition sectors of the country willing to reach agreements under the premises of soveragnity.