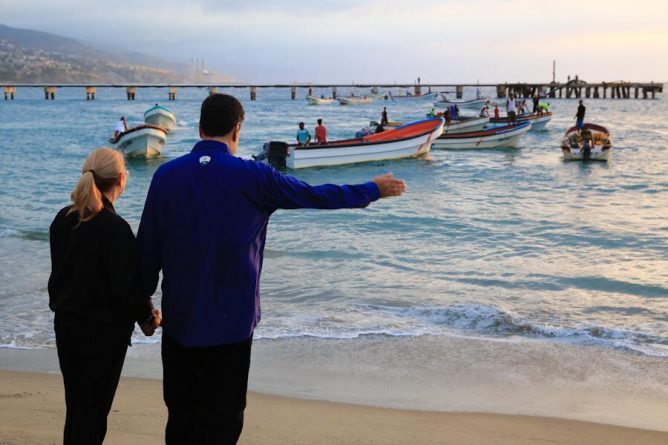 Venezuelan President Nicolás Maduro said he was proud of the constructive dialogue process carried out by the Venezuelan government and the opposition in Norway. “I speak with the truth: I am proud of the delegation we have in Norway, and I am proud that we are in a constructive dialogue with the Venezuelan opposition. I believe that the path is peace,” the president said on Wednesday with fishermen in the state of Vargas, after finishing the same day a round of talks for the peace of Venezuela, in Oslo (capital of Norway), under the mediation of the European country.

In a radio and television broadcast, Maduro remarked that Venezuela’s path is dialogue, respect for the Constitution, peace and democracy and noted that this is also the opinion of more than 80 percent of the Venezuelan people.

“It has just concluded the second day, we have agreed to be very cautious. I am proud of the delegation we have in Norway and I am proud that we are in a constructive dialogue with the Venezuelan opposition and I know that I have all the support of the people and the FANB, “he said.

RELATED CONTENT: Norway Reports on Progress in Talks Between the Venezuelan Government and the Opposition

He confirmed the progress of the dialogue between the delegation of the Bolivarian Government and the opposition representation presided over by Stalin González, Fernando Martinez Mottola and Gerardo Blyde. “Yes, I appointed a delegation. We have been negotiating in secret for two or three months and we are sitting in Norway. ”

He stressed that “it was very difficult to reach Norway, several months of secret, prudent talks, and we have agreed to remain prudent. I want a peace agreement for Venezuela! I ask for the support of the country, of Chavismo and of the Fatherland”, he said.

On the other hand, that same day, opposition leader Juan Guaidó, self-proclaimed president of Venezuela, argued that the meeting in Oslo “ended without agreement” but expressed his willingness to continue with the Norwegian mediation. Guaidó said that his representatives highlighted in the meeting the route of the “cessation of usurpation”, as they call the interruption of the mandate of Maduro, who won the presidential elections in May 2018.

In this sense, Maduro criticized Guaido’s statements, according to which, dialogue is one of the many alternatives to the overthrow of the Venezuelan leader, including foreign military intervention.

“It’s not that we’re betting on several roads; the coup d’état, violence and maybe dialogue (…) No coup, no gringo invasion! Here what is going to prevail is dialogue”, said Maduro.

The process of negotiations in Norway would be the fifth attempt at dialogue in the six years Maduro has been in power. Similar initiatives took place in 2014, 2016, 2017 and 2018.

The Venezuelan government has previously denounced the opposition for, in reality, not wanting to dialogue but to carry out the US coup plot and overthrow the legitimate president Maduro. However, Caracas has always advocated sitting at the negotiating table with all parties to find a solution in favor of peace over the crisis in the country.