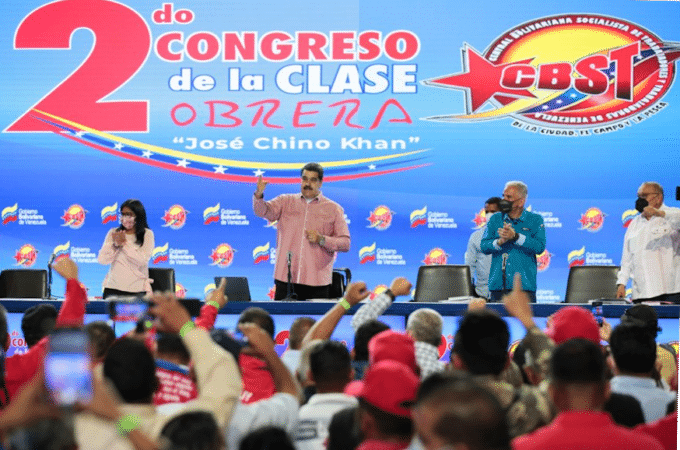 On March 3, Venezuela announced an increase in the minimum wage to half a petro, and determined that bonuses delivered to public workers through the Patria System will be considered as salary. The increased minimum wage will impact the wage scales of public employees, those under collective bargaining agreements, and pensioners.

Including bonuses within salaries will have a positive impact on workers’ labor benefits.

The announcement was made during the 2nd Congress of the Working Class, in which the Venezuelan president participates, held in the Poliedro de Caracas (“Caracas Polyhedron Arena”).

In a speech to congressional participants, Venezuela’s head of state recalled the blow that Venezuela’s economy was dealt by the US and European blockade and coercive economic measures, and how this has affected the income of workers. “We have faced a thousand demons!” said President Nicolás Maduro. “We are lowering the induced hyperinflation. The attack on the currency, we are controlling it. Economic growth, we have achieved on our own account.”

He also pointed out that “the [blow to the] minimum wage is the most penetrating wound, the most festering, because it is dependent on national income. We have created a plan, which I submit to you for debate, to restore the minimum wage, [and] all wage tables and collective contracts in a sustainable manner, controlling inflation, so that it does not skyrocket.”

Maduro also asked Vice President Delcy Rodríguez to develop a plan to compensate all the workers who have retired in the last five years, due to the minimal benefits they received upon retirement. Similarly, the president proposed the discussion of new models for collective bargaining agreements, with elements for health, savings accounts, vacations, and education.

The president also assured that, as the production of oil, gold, iron, steel, aluminum, and petrochemicals increases, Venezuela “will have assets to continue advancing and, sooner rather than later, reach the minimum wage of one petro, two petros, and continue moving forward.”