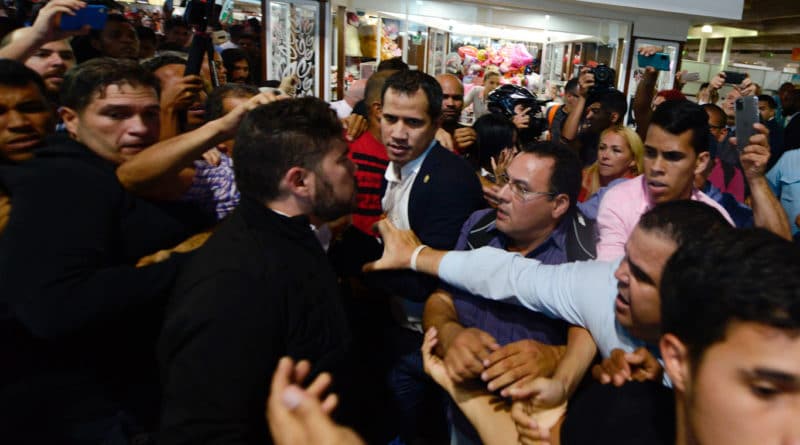 Upon his return to Venezuela, Juan Guaido was greeted by an enraged mob hectoring, jeering and manhandling him, kicking his car and covering him in water and other liquids.

Self-declared Venezuelan “Interim President” Juan Guaido may have been given a hero’s welcome at President Trump’s State of the Union Address last week, but he certainly did not receive the same treatment after he touched down at Simon Bolivar International Airport, Caracas, yesterday. His very presence was enough to turn those present, including airport employees, into an enraged mob hectoring, jeering and manhandling him, kicking his car and covering him in water and other liquids.

Video shows an angry female immigration employee shouting, “You are a traitor to our country” as his passport is getting checked. Others yelled “murderer” and “fascist” at the controversial opposition politician. Guaido was roughed up in a scrum of angry Venezuelans, his shirt ripped and his pride dented. Another video shows an employee of Conviasa (an airline recently sanctioned by Trump) chasing him through the arrivals lounge, pouring beer on him, expressing her contempt for him. He escaped in his car as onlookers pelted it with traffic cones chanting that he was “trash” and a “murderer.”

After Washington-declared President Juan Guaido landed in Caracas, scuffles broke out between Guaido supporters and opponents

Perhaps more notable than the event is how corporate media, who have strongly supported Guaio in the past, described the event. The influential French newswire Agence France-Presse described the scenes caught on camera as him “being greeted by a throng of cheering supporters at the Caracas international airport, where he arrived on a flight from Portugal.” And their account was picked up across the media.

Guaido was returning from a world tour where he was trying to increase support for further sanctions on his country. According to a study by the Washington-based Center for Economic Policy Research, Trump’s sanctions against Venezuela killed at least 40,000 people between late 2017 and 2018. An American Special Rapporteur for the United Nations visited the country and declared Trump as guilty of crimes against humanity. The U.N. deems the sanctions illegal, called on all countries to break them, and even discussed reparations the United States should pay to Venezuela. The sanctions, in their opinion, have been designed to hit “the poor and most vulnerable,” rather than political leaders.

Guaido was given a standing ovation by both Democrats and Republicans last week as guest of honor at Trump’s State of the Union address, the president describing him as a “very brave man who carries with him the hopes dreams and aspirations of all Venezuelans” fighting against the “socialist dictator of Venezuela Nicolas Maduro,” promising to “smash and break” the Venezuelan government.

Over the past year, Guaido has attempted four separate coups against Maduro, all of which have ended unsuccessfully. Guaido’s political mentor Leopoldo Lopez has stated that if they successfully regain power, they will call on the United States to formally govern the country.

Virtually unknown in Venezuela until last January, Guaido shocked the world by declaring himself the president, despite never having run for the office. In a secret meeting with Vice-President Mike Pence, Guaido promised him that he had the support of at least half the Venezuelan armed forces, getting him to provide open support for a coup. But when the time came no one rebelled, leaving him in an awkward position. His co-perpetrators fled to the United States, where they believed they would be given a warm welcome. Instead, as MintPress News reported, they have been incarcerated in an ICE concentration camp ever since.

The thought crossed my mind this AM , a CIA assassination , frame / set up Maduro . This Guaido kid is in way over his head , he doesn't even know it . pic.twitter.com/bozrhG6LSx

The self-declared interim president is increasingly unpopular inside his own coalition. In January he was voted out of a leadership position, after which he staged a faked publicity stunt where he climbed over the fence of the National Assembly, claiming he had been locked out – something that did not go well in Venezuela but was presented around the world as a heroic act. He has also been embroiled in a number of corruption scandals, caught publicly intoxicated, and stands accused of embezzling over $90 million of U.S. taxpayer money. A December survey conducted by a right-wing pollster found that only ten percent of the country supported him. Throughout all of this, however, neither the Democrats’ nor the Trump administration’s loyalty to him has ever wavered.

This latest incident at the airport is another jarring reminder of the chasm between the image of Venezuela the West receives through corporate media and the reality on the ground. Once again, the press prints bad news from Venezuela, knowingly planting fake news in order to lay the groundwork for more regime change operations.