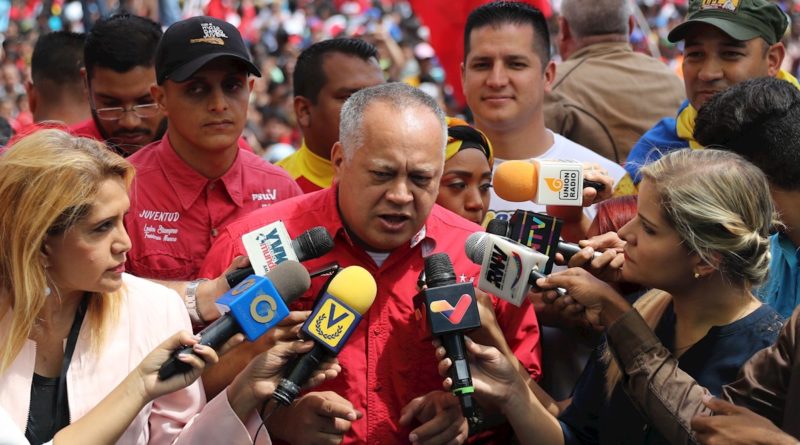 Diosdado Cabello, first vice president of the United Socialist Party of Venezuela (PSUV), highlighted the response of the Conviasa workers on February 11 at the Maiquetía airport, when they strongly confronted Deputy Juan Guaidó upon his arrival to the country after having made a international tour that achieved new sanctions against Venezuela, particularly against the aforementioned Venezuelan airline.

“They messed with 2,200 workers from Conviasa who have nothing to do with …, who are workers and it make our people feel absolute outrage,” said Cabello in statements at a political rally (March of Youth) on February 12. “They – the opposition represented by Guaido – are going to continue asking for sanctions because they work for US Imperialism. They are not at the service of our people.”

Cabello explained that “we have been affected in the delivery of food, medicine, transportation, telecommunications, in the daily life of Venezuelans by the sanctions imposed by the United States, requested by agents who work for imperialism,” including Juan Guaidó and deputies who support him, “who live asking for sanctions against our people. They regularly ask for an invasion.”

Controversy about whether they were Conviasa workers or not
Journalists from some private and international media said yesterday that the protesters present Tuesday at the Maiquetia airport were not Conviasa workers, but people “paid for by Chavismo” who wore the uniforms of the airline. One of those who issued these statements without offering evidence in this regard was Alberto Ravell, director of the La Patilla extreme right wing news outlet and director of Guaidó’s “national communication center”.

“They are impressed because the people demanded respect yesterday. The people will continue to do so, because the people are on the street and they have been empowered by this revolution.” He wondered ironically if they believe that people “will go to receive them and thank them for the US sanctions.”

“They are so immoral that they say there were people disguised as Conviasa workers, because the Conviasa workers,” they say, “are not against sanctions.” In this regard, he said that “they sanctioned Conviasa and its workers went out to defend it, as it should be!”

“They messed with [those they shouldn’t have], they messed with the people, and the people, wherever they go, will wait for them. What happened yesterday is a spontaneous reaction of an indignant people, who got tired of those who are asking for sanctions against Venezuela abroad. Let them assume their responsibility, that we will assume ours.”

There were very few media that tried to interview Conviasa workers to find out about their position.