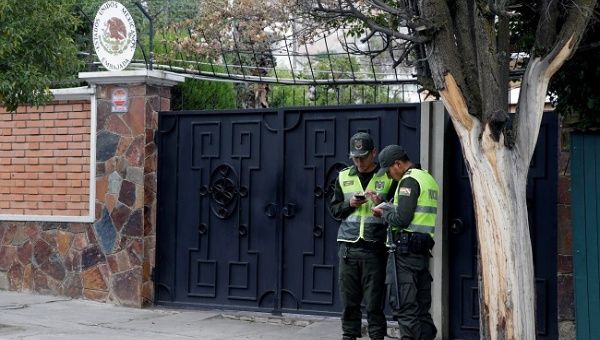 The Mexican government, under the leadership of Andrés López Obrador (AMLO), reiterated its complaint about the “harassment” and “intimidation” of its embassy staff at the official mission’s residence in La Paz, Bolivia. Since the coup d’etat in Bolivia, at least nine people have taken refuge at the embassy in La Paz.

In a statement on Wednesday, the Ministry of Foreign Affairs said that the “intimidation” by Bolivian police officers is “against accredited personnel and against persons under the protection of the Mexican state” in the South American country.

RELATED CONTENT: The Complex Journey of Evo Morales to Mexico

The statement pointed out that “everyone has the right to request asylum for reasons or crimes of a political nature or for those crimes of the common law that have a connection to political motives, whose life, liberty or security is in danger.”

They said that Mexico is respectful of the “high value” of asylum, “and therefore enforces this right of the nine people who are, today, under the protection of the Mexican state in the diplomatic buildings of Mexico in La Paz, including the 4 individuals who have arrest warrants, which our embassy was notified about on a date after the granting of asylum.”

The Mexican government expressed its desire to continue with the procedure initiated with the Bolivian Foreign Ministry “to obtain the respective safe-conducts”.

The Mexican Foreign Ministry revealed that the Chargé d’affaires of Bolivia in Mexico was summoned on Thursday to continue the dialogue and to explain the actions of Bolivian officials.

“The government of Mexico reiterates its demand to the Multinational State of Bolivia to comply with its international obligations, guarantee the inviolability of diplomatic missions and cease this harassment and intimidation policy,” the official statement concluded.