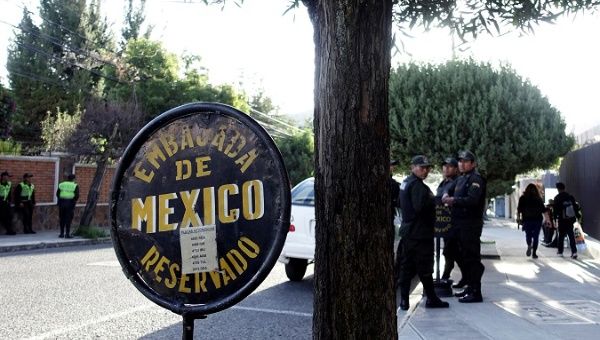 Officers under the command of the coup-born regime carry out controls on all persons entering or leaving the Mexican embassy in La Paz.

La Paz Police Commander William Cordero Tuesday demanded that Mexico hand over supporters and former officials of the Movement Towards Socialism (MAS) who sought refuge at the Mexican embassy after the coup d’état against President Evo Morales perpetrated on Nov 10.

“The Mexican representatives should better collaborate with the Bolivian Justice and hand over the people who take refuge inside the embassy,” Cordero said.

Mexico’s President Andres Manuel Lopez Obrador (AMLO) pointed out that the coup-born government led by Jeanine Añez could be violating international law and the conventions on the right to asylum.

Despite the complaints made by the Mexican government, the Bolivian police maintain unusual levels of surveillance around the Mexican embassy.

Bolivia’s Security Minister Wilson Santamaria, who denied that the de-facto government is harassing Mexican diplomats, said that the increased vigilance around the embassy is intended to prevent “the escape” of former officials.

“We are exercising our sovereignty and have taken the necessary provisions so that our security devices can immediately detect any complicit action aimed at helping the fugitives [inside the embassy] to leave the country. We will not allow that,” Santamaria said.

On Tuesday the AMLO administration issued a protest note demanding respect for the inviolability of its diplomatic mission.

“Are they protecting us from ourselves?,” Reyes asked.

Mexico’s Secretary of International Relations denounced that Bolivian security agents carry out controls on all persons entering or leaving the Mexican embassy, attempt to impede the free transit of the diplomatic personnel, and follow the movements of official diplomatic vehicles.

“They are delaying. They consider that our country, Mexico, is garbage. They can kill anyone at the Mexican embassy. In Bolivia, there is no government but a dictatorship.” The meme reads, “the Secretary of International Relations (SRE) is on permanent alert and anticipates the risk of armed incursion into the Mexican embassy in Bolivia.”

RELATED CONTENT: The Complex Journey of Evo Morales to Mexico

“We will continue denouncing the harassment of our diplomatic precincts and the overt violations of international law in Bolivia,” Guadarrama stressed.

In response to this circumstance, the AMLO administration, which does not recognize Añez as president, provided shelter to some members of the Morales administration.