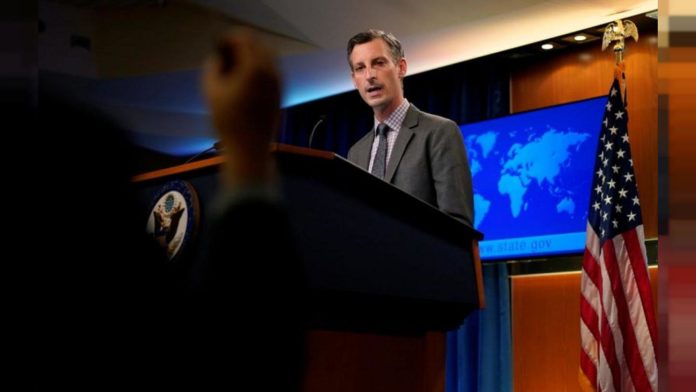 With a new process of dialogue underway between the Venezuelan government and the extreme-right opposition sector of Venezuela, the government of the United States immediately sought to impose conditions on the Caribbean nation’s government.

This was made clear by the words of Ned Price, US Department of State spokesperson. The official stated in a press conference that his country insists on holding elections in Venezuela as a requirement for Washington to “ease” the illegal sanctions it imposes.

Faced with this imperialist arrogance of imposing conditions on sovereign countries, the Venezuelan government has reiterated that the national Constitution clearly establishes the dates for electoral processes. For example, the election of the new National Assembly was in December 2020, and the regional elections are scheduled for November 21 of this year.

However, the US government persists in placing conditions on Venezuela, on the basis of claims that only reveal its desire to interfere in Venezuela’s internal affairs. In addition, the US insists on its unique ability to determine what constitute “free and fair” elections—a process that even US citizens are unclear about lately.

For this reason, the State Department spokesperson stated that the lifting of the illegal sanctions “requires that the Maduro regime participate in sincere discussions with the opposition led, of course, by interim president Juan Guaidó, resulting in a comprehensive negotiated solution to the Venezuelan crisis.” In this sense, Price reveals a profound lack of understanding of Venezuela’s current political status and the increasing lack of international support for the US puppet, former deputy Guaidó.

Zero blackmail
Confirming the attendees to the commission headed by the president of Venezuela’s Parliament, Jorge Rodríguez, President Maduro was emphatic when expressing that Venezuela assumed its role in the Mexican talks autonomously and independently. “We do not submit to blackmail or threats from the United States government,” said Maduro.

In this way, the head of state made clear that, in the new phase of rapprochement, the interlocutors continue to be “the slaves” of the United States plutocracy. He even recently affirmed that the willingness now shown by the extreme right to rejoin the democratic process is an instruction that they were given from the North.

Along these lines, President Nicolás Maduro has reiterated his call for all opposition factors to join the constitutional terrain and abandon the violence that is brewing, in what he considered a “fantasy policy” on the part of the extreme right.

A political analyst consulted by Orinoco Tribune stressed that “if other actors of the Venezuela opposition are not present in Mexico it is the result of the sectarianism of the extreme-right opposition represented in the G4, and of the extreme-right political parties supporting the failed US-led Guaidó project. But President Maduro’s representatives in the Mexico Talks will push to have a real representation of Venezuela’s opposition taking part in the dialogue.”

Meanwhile, US State Department spokesman Ned Price asserted that the Biden government “is willing to review [illegal] sanctions policies, based on significant progress in comprehensive negotiation.”