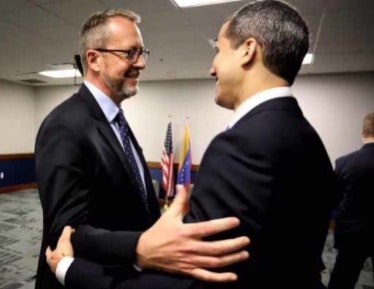 On Friday, September 24, the sessions of the dialogue between the Venezuelan government and the extreme right opposition, taking place in Mexico, were resumed. However, it seems that instructions have been issued to the opposition from the spokesperson of the US government.

Although it was established in previous meetings that the head of the opposition delegation is the former deputy Gerardo Blyde, it was James Story, White House’s “ambassador” to Venezuela based in Colombia, who announced the guidelines to be followed by the opposition’s Unitary Platform.

In a video broadcast on his Twitter account, James Story, whom the Colombian government recognizes as the US “ambassador” to the fake “interim” government, of which former deputy Juan Guaidó proclaimed himself “president,” affirmed that the opposition “will focus on judicial reforms” in the third round of the negotiations.

Likewise, the Washington spokesman announced that his government is looking forward to the results of the talks, while reiterating the conditions of the Joe Biden administration, that any possibility of sanctions against Venezuela to be relaxed or lifted will depend on the outcome of the Mexico Talks.

The “shameful” role of Story
Reacting to James Story’s remarks, the Executive Vice President of the Bolivarian Republic of Venezuela, Delcy Rodríguez, expressed total repudiation, and defended the sovereignty of Venezuela.

Rodríguez, citing the US diplomat’s statements on Twitter, said that the Biden representative embodies a “failed project” that has only known defeat and asserted that “this is how it will be forever.”

For his part, Jorge Rodríguez, the plenipotentiary chief of the Venezuelan government delegation in the dialogue, also denounced James Story’s message. He defended the integrity of the negotiation process, which is being mediated by the Kingdom of Norway and accompanied by the governments of Russia and Netherlands.