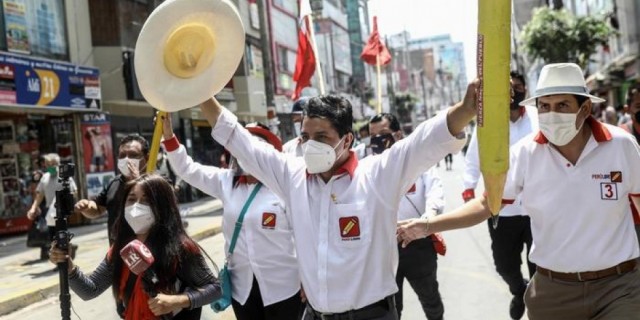 Caracas, April 11 (special for OrinocoTribune.com) – This Sunday’s presidential races in South America produced mixed political results. Andres Arauz, the Correista candidate in Ecuador’s second round, conceded victory to right-wing candidate and banker Guillermo Lasso, while in Peru the Ipsos exit poll results showed the leftist candidate Pedro Castillo (Peru Libre) winning with 16.1%, not enough to secure a victory, and thus ensuring a second round. Castillo will contest the presidency in the runoff against the individual arriving in second place, currently tied between neoliberal Hernando de Soto (Avanza Pais) and right wing populist Keiko Fujimori (Fuerza Popular), both, according to Ipsos, receiving 11.9% of the vote.

The biggest surprise of the night is in Peru, where presidential election exit polls show Pedro Castillo, who had been seventh in earlier polls, unexpectedly came in first place.

Castillo is an activist and organizer of a major strike, from an anti-imperialist socialist party pic.twitter.com/ZLkO2kh3TI

In Ecuador a mainstream media campaign against Andres Arauz, political judicial persecution of anything connected with former president Rafael Correa, along with a fractured Indigenous movement that called for nullifying ballots, may be among the reasons for Arauz’s defeat—a loss that is strongly heartfelt by leftist forces within Latin America.

With 98.03% of votes counted, the Ecuadorian  Electoral Council (CNE), with its authorities handpicked by right-wing president Lenin Moreno, showed Guillermo Lasso winning with 54.48% and Andres Arauz with 47.52%.  A very high turnout of 82.85% was reported, but also 17.89% of votes were reported as invalidated, far above the traditional number of previous elections, reported as 10% in 2016 and 9% in 2013 by the Canadian writer Steve Lalla on his Twitter account.

#Ecuador reporting about 18% of spoiled/nullified ballots, an incredible 1.6+ million nullified ballots. For comparison this was about 10% in 2017 & 9% in 2013. The difference would easily be enough to give Arauz the win.

With another perspective, the US journalist Ben Norton expressed his frustration, noting that anarcho-liberals including CONAIE and Pachakutik invited their followers to vote null, and influenced the results that will place a right-wing politician—even more right-wing than Lenín Moreno, according to many analysts—in Ecuador’s presidency.

I'm sure the anarcho-liberals who voted null in Ecuador's election (including CONAIE) as a protest against the socialist Correísta movement are proud now that their new president is going to be a far-right multimillionaire corrupt neoliberal banker, Opus Dei member, and US puppet https://t.co/AKCM6VHQrH

Meanwhile in Peru, a candidate that was not being presented among the top five favorites won what is now the first round in Peruvian presidential race. Pedro Castillo, a former teacher and undeniably left-wing politician, ran an austere campaign and was very straightforward about his political views. He clearly expressed his support for a constituent assembly to be organized to draft a new Magna Carta for Peru. Castillo expressed his opinion that Venezuela is a democracy and Nicolás Maduro the legitimate President, despite the fact that right-wing media portray this opinion as a crime against humanity.

This is the leader of the party whose candidate Pedro Castillo came in first in Peru's election tonight: "Perú Libre is a party of the socialist left, in a neoliberal ocean," which is attacked "not only by the right but also by the revisionist pseudo-left"https://t.co/2vsRRwMdJt

The now confirmed second round —if the Peruvian electoral authority results are similar to those from Ipsos— will pit Pedro Castillo against Hernando de Soto, a neoliberal economist and mastermind of Alberto Fujimori economic shock doctrine, or Alberto Fujimori’s daughter, Keiko Fujimori. An between them, regardless of who comes second, is foreseen by most experts—as well as an alliance between Pedro Castillo and other leftist forces from Peru.

For now Latin American leftist forces hold mixed feelings about the electoral results from Ecuador and Peru. In any case, facing powerful media warfare and smear campaigns against the left, the numbers show a very significant support in the region for the socialist road, the anti-imperialist path, and one of Latin America unity that is, according to many experts, the only course that can place the region as a significant player in a world that is becoming more multipolar every day.