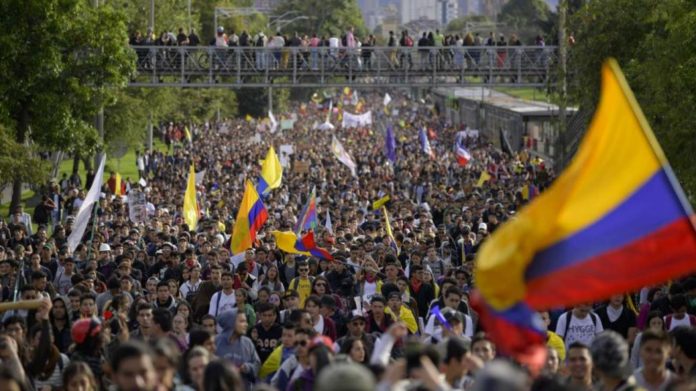 The National Strike Committee of Colombia announced that peaceful mobilizations will continue throughout country, as the government of Iván Duque refuses to endorse the preliminary agreement agreed to in May.

“The peaceful strike continues due to the government’s attitude of refusing to negotiate the emergency document,” said Committee delegate Francisco Maltés.

Maltés, also president of the Central Union of Workers, demanded that President Duque comply with the preliminary agreement that they established on May 24, specifying the cessation of the country’s militarization during the national strike.

This Tuesday, in compliance with its part of the agreement, the strike committee began the progressive lifting of road obstructions, so that the national government would have no excuse to enter negotiations.

“It is one more demonstration of our willingness to reach a negotiated and concerted solution to this national strike taking place in Colombia,” said a representative of the Committee, Nelson Alarcón.

Since May 30, the Strike Committee warned that the strike and demonstrations—which began on April 28—would not be abandoned, and issued a statement in which it explained the reasons why they will continue to take to the streets.

“It (Ivan Duque’s repressive government) remains silent not only in the face of valid citizen claims; rather, it inconsequentially delays the signing of an agreement of basic guarantees that would open the path for setting up a dialogue,” read part of the statement.

One of the main complaints of the Committee is the police abuse and excess of state violence during the strike and demonstrations, which has resulted in alarming and tragic consequences with many killed, injured, sexually abused, and desaparecidos (disappeared), actions that have been denounced by multiple human rights organizations.