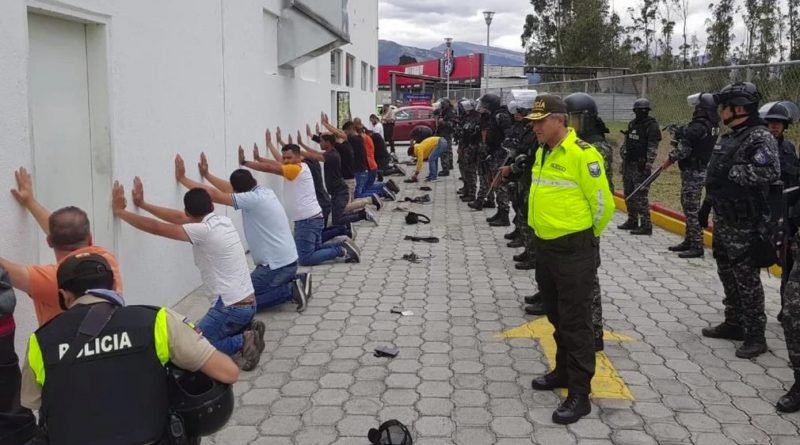 The Ecuadorian government announced that it arrested 17 foreigners Thursday, most Venezuelans, with information on the ousting of President Lenín Moreno, who faces strong indigenous protests over his economic adjustments, the AFP agency said.

“Seventeen detainees at the Quito airport this morning. Most of them Venezuelans. In his possession, information on the mobilization of the President and Vice President,” said the Minister of Government (Interior), María Paula Romo, on Twitter.

He added that the arrests confirm “all the interests that are behind the chaos in the country,” in reference to Moreno’s complaint about an alleged plot to overthrow him in which he involves his predecessor Rafael Correa and Venezuelan president Nicolás Maduro.

The minister uploaded two images to the social network in which several men detained on their knees are seen looking at a wall with policemen behind, and another, with a photo of the presidential plane escorted. “The satrap Maduro has activated, along with Correa, his destabilization plan,” Moreno said days ago, when the riots were already under way, which broke out on October 2 due to the elimination of subsidies that made fuels more expensive.

No names and no face photos were released of the alleged spies. “It is against any intelligence rule to have spies in groups bigger than 2 or 3 persons and they captured seventeen al together parked in the Quito airport”, said a political expert to Orinoco Tribune.

Maduro mocked the point: “Yesterday President Lenín Moreno came out to say that what is happening there (in Ecuador) is my fault, that I (…) move my mustache and I get rid of governments, so says Lenín Moreno,” he said.

On his side Correa, who lives in Belgium, denied the accusations and raised the proposal of early elections to content the “serious social upheaval.”