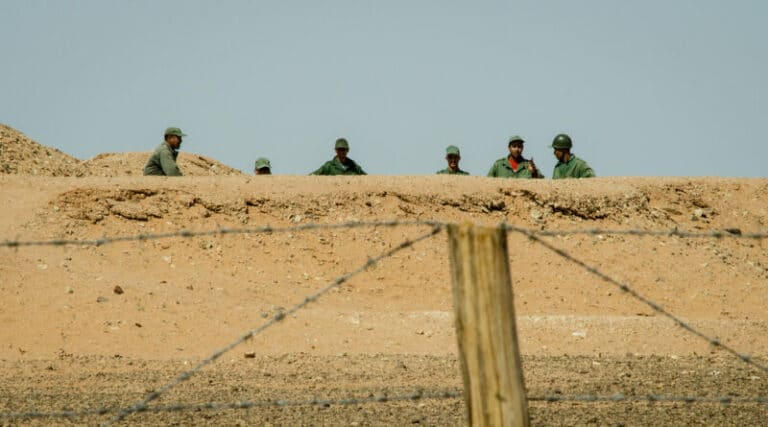 The Moroccan regime, in full view of the whole world, continues to repress the Saharawi people, whom it continues to murder unceremoniously, not satisfied with having usurped eighty percent of its territory and continuing to exploit its phosphate deposits since 1975, the most important in the world, and also one of the world’s largest fishing grounds, with the consent of the Spanish crown, a fundamental partner in the dispossession of the Saharawi Arab Democratic Republic (SADR).

In the last hours, the Polisario Front has denounced the death of 11 civilians in two attacks apparently carried out by Israeli drones type Hermes 450 equipped with Hellfire missiles, directed by Moroccan army troops, which took off from a Moroccan air base in Smara, (Saharawi territory under Moroccan occupation) 230 kilometers from the point of attack in the area of Miyek, about 100 kilometers east of the great sand wall that Rabat began to build in 1980, which extends for 2. 700 kilometers from the Atlantic to the Algerian border, reinforced by state-of-the-art technology, cameras, sensors, surveillance turrets, drones and a gigantic planting of millions of anti-personnel mines to prevent incursions by Sahrawi People’s Liberation Army (APLS) fighters.

The wall cuts in two the former Spanish colony, which had achieved its independence in 1975 following negotiations after the armed resistance against Franco, which were ignored with the arrival of the Bourbon, who has always counted on the support of the Makhzen, as the elites entrenched in the Moroccan government are known.

For their part, the authorities of the Alaouite kingdom, faithful to their policies of invisibilization of the conflict, one of the most asymmetrical in history, have neither confirmed nor denied the news.

According to the information provided by the Polisario, the first attack would have taken place in the evening of last Sunday 14, when four people were attacked after they had just left one of the two vehicles which were moving in that area in search of a gold deposit located in that sector. When they took refuge in the other vehicle, a Toyota pick-up truck, another shot was fired at the vehicle as it was trying to escape, killing all the occupants, eight in total. On November 3, three Algerian truck drivers were killed in Bir-Lahlou, in the liberated territories of Western Sahara, while covering the route from Nouakchott, the Mauritanian capital, to the Algerian city of Ouargla, for which Algiers issued a statement denouncing that the “barbaric bombing had been carried out by the Moroccan occupation forces in Western Sahara” to conclude by warning that the crime would not go unpunished. The event comes at a time when the historically very tense relations between Rabat and Algiers are at a point of approaching the point of no return, which has caused many analysts to consider that the outbreak of a full-scale war is only a matter of time.

Regarding the “incident” of the trucks, Moroccan sources indicate that it occurred when the vehicles crossed a minefield with military material to be delivered to the Polisario. The aggressions of the Alaouite kingdom did not end there, but, in the extensive statement of the Polisario Front, it is also denounced that Moroccan paramilitaries attacked the Saharawi activist Sultana Jaya in her house in the city of Boujdour, at this moment under Moroccan control, on the 15th. The activist had already denounced that she has been harassed for a year, during which time she suffered five raids in addition to being prevented from visiting her, without any judicial resolution.

Algeria, historic ally of the Saharawis, broke off diplomatic relations with Morocco last August and at the end of October cut the Maghreb-Europe gas pipeline (GME) which for twenty-five years has been supplying Spain and Portugal through Moroccan territory, adding more drama to the situation, which threatens to ignite the Maghreb.

For the United Nations, the Saharawi Arab Democratic Republic, beyond its almost 50 years of struggle, remains a “non-self-governing territory” pending the resolution for decades of the referendum on Western Sahara for which Staffan de Mistura has just been appointed, after almost three years of vacancy.

A theory firmly held by both the United States and France, since their political, strategic and fundamentally economic interests with the autocracy of Mohamed VI, oblige them to maintain this line at the price of ignoring the rights of a people.

The arrival of Joe Biden at the White House has not reversed one of the last moves of his predecessor Donald Trump who in December 2020 recognized Rabat’s authority over the Saharawi territories in exchange for Morocco’s adherence to the “Abraham Accords”, thus getting several Muslim nations to establish diplomatic relations with the Zionist enclave illegally occupying Palestine. In addition, the Alawite kingdom is the most important buyer of arms in Africa, mainly American and French, and one of the largest in the world.

A war horizon
Although Algeria has been an indispensable ally of the Saharawi resistance, even hosting hundreds of thousands of refugees settled in Tindouf in the south of the country, as was also the Libya of Colonel Qaddafi, the growing crisis between Rabat and Algiers cannot be attributed solely to this support, but the roots of the conflict are even deeper, so that the Algerian declarations following the death of the three truck drivers in early November have older connotations and are not mounted on the urgency of responding to these events, which are in themselves extremely serious.

The conflict between the two nations, which share a border of 1. The conflict between the two nations, which share a border of 1,700 kilometers and which between them import more than sixty percent of the continent’s arms, began in 1963 over border issues after gaining independence from France, a situation that has not been resolved in all these years in what became known as the “War of the Sands” and since then relations have been extremely tense, increasing in 1975 in the midst of competition for regional leadership, in which the issue of Western Sahara was very well used by Algiers, causing a rupture of diplomatic relations from 1976 to 1988. In 1994 Algeria closed the land border with Morocco after Rabat imposed visa requirements for Algerians following accusations that the Algerian secret services had been behind the attack on the Altas Asni hotel in Marrakech, in which two Spanish tourists were killed, which continued with the expulsion of Algerians living in Morocco. The border closure technically continues despite Mohamed VI’s requests for opening, so the truck incident and subsequent statements are not to be taken lightly, much less for Europe, which would have a war of proportions a stone’s throw away from its borders.

For now, beyond the severing of diplomatic relations, Algeria has taken an almost bureaucratic action by exposing the situation to the United Nations, the African Union Commission, the Arab League and the Organization of Islamic Cooperation (OIC), denouncing Rabat for using advanced weaponry to prevent the free movement of vehicles in a “territory over which it has no rights”, assuring that the attack carries “imminent risks for security in Western Sahara and the whole region” and confirming that “Algeria is capable of defending its citizens and its interests in all circumstances”.

Meanwhile, Morocco has only replied “that it will not allow itself to be dragged into a war”, even if the action shows the opposite direction. Meanwhile, the Moroccan media, under absolute State control, launched a campaign against Algeria.

Last Saturday the 6th in remembrance of the 46th anniversary of the beginning of the Green March, an impostured seizure by Morocco of the Saharawi territories taking advantage of the fact that the dictator Franco was dying and already had the complacency of the fugitive Bourbon and the State Department (the order is actually reversed) the monarch Mohamed VI has made clear that for Morocco the Sahara is “non-negotiable”, while threatening to suspend trade relations with those who do not recognize the “Moroccanness” of the Sahara.

The current situation between the two nations is far from being resolved and given the background, the possibility of war seems to be just around the corner.