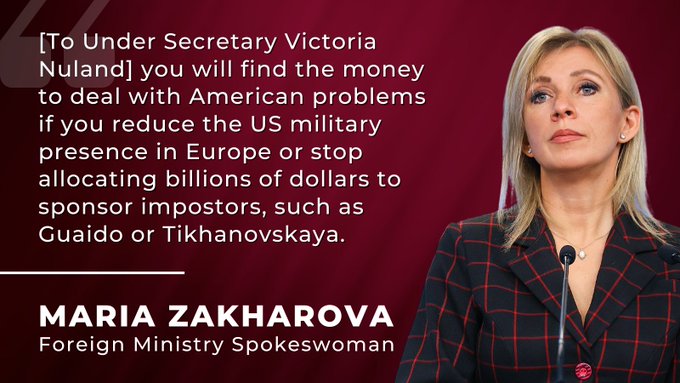 Caracas, January 12, 2022 (OrinocoTribune.com)—The spokesperson for the Russian Federation’s Ministry of Foreign Affairs, María Zakharova, urged the United States to reduce its military presence in Europe, and to stop financing both Venezuela’s far-right opposition led by Juan Guaidó, and his Belarusian counterpart Svetlana Tikhanovskaya. Instead, said Zakharova, the US should use those assets to solve the country’s abundant internal problems.

“The US would be able to find enough money to solve its problems, if it reduces the military presence in Europe, or stops allocating billions of dollars to support impostors like Juan Guaidó,” Zakharova said.

The statements from the Russian spokesperson came in response to typical US interventionist statements issued by US Undersecretary of State for Political Affairs, Victoria Nuland, about how Russia should invest its resources. “The wealth of Russia, were I a Russian citizen, I would want to see applied to the healthcare system, to the education system, to the roads… rather than hemorrhaging money on a created crisis and putting their own military out there in the snow,” wrote Nuland. Perhaps she was not aware that the US remains the only developed country without a universal healthcare system.

“Victoria, continue to be a US citizen, and think about the same things, but in relation to your country that faces a sea of ​​problems,” the Russian top diplomat said in response. Zakharova went on to mention the exorbitant military spending of the US, which includes a network of military bases encircling Russia. The US military budget is roughly equivalent to that of the next 11 nations combined, with an annual budget of at least $715 billion.

“The US healthcare system has shown its worth to the American people and the rest of the world during the pandemic,” Zakharova pointed out. “If you are concerned about roads, please, turn your eyes to New York, where the Manhattan potholes are probably worse than in any other major city in the world.”

Zakharova also described statements of White House representatives as absurd and error-filled, qualities which “clearly testify to the quality of education” in the North American nation.

Regarding the US backed puppet Juan Guaidó, the president of Venezuela’s National Assembly, Jorge Rodríguez, recently asked the Special Committee For The Investigation Of Actions Perpetrated Against the Republic to “incorporate within a period of seven days the crimes” committed on January 3 by former deputy Guaidó and his fake National Assembly. On that date, Guaidó and his allies announced that they would continue attempting to act as Venezuela’s parliament, despite the fact that their Constitutional term expired in January 2021. Although its international support has evaporated, Guaidó’s attempted parallel government, frequently referred to as “Narnia,” continues to be recognized as the interim government of Venezuela by the US.

As Rodríguez detailed, Guaidó was allocated $36.6 million by Washington for the so-called Health Heroes. In addition, $8 million was distributed for operating costs of the fake National Assembly, and another $23 million for “security and defense of democracy.” Guaidó and his entourage have embezzled several hundred million dollars, both from US taxpayer dollars, and of assets belonging to the Venezuelan state and people.

Featured image: Maria Zakharova with a caption of her recent statement on Guaido and Tikhanovskaya. Photo: Russia’s MFA.