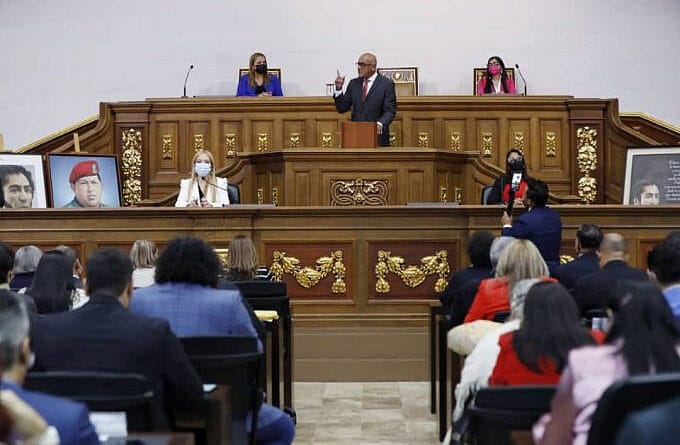 This January 5, 2022, the president of Venezuela’s parliament, Jorge Rodríguez, requested that the special commission formed in January 2021 to investigate crimes committed by the 2015-2020 parliament incorporate the recent announcement by Juan Guaidó among its list of offenses. On January 3, the self-declared “interim president” Guaidó stated that his fake national assembly will continue to claim legitimacy, despite the fact that its constitutional term expired one year ago.

The supposed “government” of Guaidó also announced its distribution of several million dollars, expropriated from Venezuelan funds frozen by the United States in foreign banks. The report on the distribution of Venezuela’s assets, as Rodríguez noted, constitutes additional evidence of the great theft of assets belonging to the Venezuelan state and its citizens, carried out by the self-proclaimed parallel government in league with its US backers and their allies.

Rodríguez, who was re-elected as president of the National Assembly (AN), issued the request during the inauguration of the AN for the 2022-2023 term. “These are crimes that were perpetrated two days ago and that have been confessed to by their authors,” Rodríguez said. “Because, if you meet with other accomplices in robberies and say ’20 million for you, eight million for you, 300 million for me,’ you are committing the crime of robbery. And even more serious—robbery from the people of Venezuela. It’s enough, it is over. They must answer to justice.” Rodríguez made the statements in a petition to the special commission coordinated by opposition deputy José Brito.

According to data read by Jorge Rodríguez and obtained from information published by Guaido’s fake “national assembly,” in the period 2020-2021 they were allocated $382 million. Of this amount, $36.6 million was allocated to the so-called “health heroes,” although Rodríguez assured that no Venezuelan health worker has received anything from that fund. About $8 million was distributed to the fake national assembly, $23 million to “security and defense of democracy,” $198,000 to the CVG [Corporación Venezolana de Guayana] board of directors appointed by Guaidó, and $198,000 to the fake BANDES. All remaining funds were “deposited in accounts in the United States,” stated Rodríguez. “Money that belongs to Venezuela.”

In addition, Rodríguez reported another $841 million that, according to the governments of Spain, Colombia, and the US, was given to Guaidó for humanitarian aid. Rodríguez confirmed that these funds were not distributed to any Venezuelans.

Assets received in 2020 and 2021 by Guaidó and his gang amounts to $1.2 billion. “He received more than $1,600 per minute in 2021,” Rodriguez said. He also read a statement from the State Department, confirming that Guaidó received $1.9 billion for humanitarian, development, and health aid.

Therefore, Guaidó received $3.1 billion in total, concluded Rodríguez, with which 442 million doses of COVID-19 vaccines could have been purchased, or enough to vaccinate all of Latin America and the Caribbean. Alternately, this amount of doses could vaccinate all Venezuelans against COVID-19 for 22 years.

He pointed out that the euphemism of “asset protection” has served to perpetrate “the greatest robbery against the Republic that this country’s history has ever known, and I dare say, this continent.” The euphemism of “asset protection” was employed to hand over the Venezuelan company Monómeros to Colombia’s President Iván Duque, and to transfer US-based Venezuelan oil subsidiary CITGO to the US government. “It is only a matter of time before they hand CITGO over to what they call ‘the debtors,’ with whom they have already agreed, and now they received millions of dollars, as recorded in a Delaware court,” Rodríguez said. Rodriguez detailed how Guaidó directly received $382 million through the “asset protection” ruse.

On the other hand, Rodríguez suggested that the Twitter account of journalist Eugenio Martínez, @puzkas, be reviewed. Martínez, who tends to align himself with the opposition, nevertheless made interesting revelations about the expenses and payroll of the personnel of the so-called “interim government.”

According to details provided by Martínez, members of the “interim government” were paid salaries of $3,500 to $4,500 a month.

Martínez also denounced that “the greatest weight of the budget is concentrated in the Rescue and Defense of Democracy game, from which the G4 and minority parties within the interim government received approximately $20 million.” The allocation for the parties is indicated by the euphemism of Zone 1, Zone 2, Zone 3, Zone 4 and Zone 5, as Martínez himself explains in a tweet.

Among other striking figures, $660,000 was allocated for “community training workshops” for each of the five zones, that is, for the G4 parties (Democratic Action, A New Era, Justice First, Popular Will, and a fifth that was not identified).

After that, Martínez published on January 4 another thread in which he posed a series of questions about the handling of the budget by the so-called “interim government” of Guaidó, including the following questions:

• Of the account that is in the United States, whose initial balance was $382 million, how much remains after the resources allocated to the release fund in 2020 and 2021?

• In 2020 the Liberation Fund received $80 million, of which you reported that $61.6 million was approved by the US authorities, and of this amount 96% was used. That is, in the end they used $59 million. What happened to the remaining $21 million? Did they not receive authorization from OFAC (Office of Foreign Assets Control, an entity dependent on the United States Department of the Treasury) for its use? If not, why?

• Regarding the $59 million expended in 2020, you mentioned that $36.6 million was spent on Health Heroes, PAHO (Pan American Health Organization), the Red Cross, and the Madre María program. What about the remaining $22 million?

• By 2021, the Liberation Fund was authorized for $152 million. Would this amount have included the remainder not authorized by OFAC in 2020? Will it be possible to detail how the money was distributed? What are specific items and causes?

• In 2020, the National Assembly approved the firms BRV Disbursement Co. LLC and BRV Administrator Co. LLC to be in charge of managing the funds abroad. Are those two firms still in charge of that administration? If so, how are the funds administered, and how do they allocate resources? When OFAC authorizes the funds, it transfers it to those firms, and these firms distribute it to the organizations and entities designated by the “interim government.” Do these firms provide detailed accounts to the “interim government”?

It is striking that US government institution OFAC is the organization that, according to Martínez, provides authorization for the use of Venezuelan money held in accounts abroad.