The President of the Association of the Mothers of Plaza de Mayo, Hebe de Bonafini, through a letter published this Monday, January 31, expressed the organization’s disagreement to the payment of Argentina’s external debt with the International Monetary Fund (IMF). An exorbitant loan was issued by the Washington, DC-based IMF to the Argentine government during the mandate of former neoliberal President Mauricio Macri. The $56.7 billion loan was the largest ever issued to a single country.

The Mothers of the Plaza de Mayo organization was formed to struggle against the Argentine dictatorship of 1976 to 1983. Participating in the US-led Operation Condor, the military dictatorship’s Dirty War killed and disappeared thousands of suspected leftists and communists. The Mothers of the Plaza de Mayo represents women whose sons and daughters vanished, and at that time demanded answers from the military authorities. Today, they continue to pursue justice for these crimes, and are consistently engaged in the struggle for political, and civil rights across the region.

“Despite our intense work of 45 years of struggle, through all our marches (almost three thousand), we have not managed to avoid the payment of foreign debts which are not ours,” Hebe de Bonafini wrote in the letter. 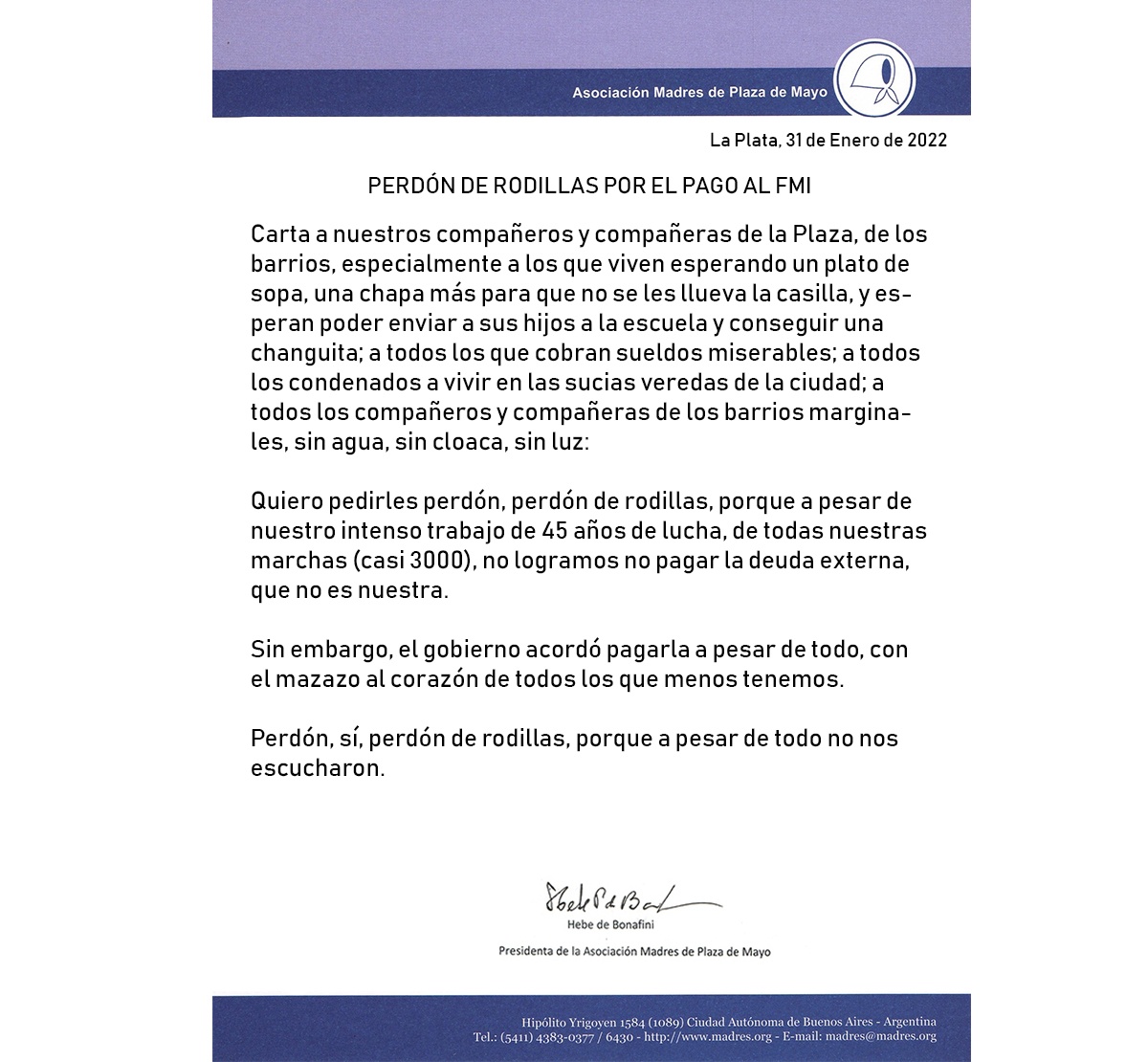 Due to the recent negotiation between the government of Argentina and the International Monetary Fund (IMF), the Mothers of Plaza de Mayo demonstrated on several occasions. On January 27, Hebe de Bonafini posted a video criticizing the Fernández administration’s compromise with the IMF. “The Mothers have been fighting for many years so that the debt is not paid,” wrote Bonafini. “Since we learned what Macri did, we have been saying it.”

“It is not due, nor can it be paid, because everything has been fraudulent in the delivery of the money, because the money that was lent to Macri, or was given to Macri, is almost 90% of what the Monetary Fund approves for others countries combined,” stated an activist from the Mothers of Plaza de Mayo. “90% were given to Macri, and he still lost the elections. As if we were guilty, we have to pay for it… This was not consulted; there are many things to investigate, for which the loan does not have to be paid.”

“To our compañeros and compañeras from the plaza, from the neighborhoods, especially those who live in wait for a bowl of soup, for one more chapa [metal sheet] so that their little house doesn’t get washed away, or who hope to be able to send their children to school… To all those who earn miserable salaries, to all those condemned to live on the dirty sidewalks of the city, to all the compañeros and compañeras from the poor neighborhoods, without water, without sewage, without electricity: I want to ask you on my knees for forgiveness.”